Once Upon a Time in Queer Oregon

Annie Murphy is a queer comics artist, writer, editor and publisher in Portland, Oregon. She’s also an alumnus of the Center for Cartoon Studies, where she completed her Xeric Award-wining graphic novella, I Still Live: Biography of a Spiritualist (2008). Murphy is also the founding member and artist of the Tarot Collective, the group that published the celebrated, out-of-print Collective Tarot. 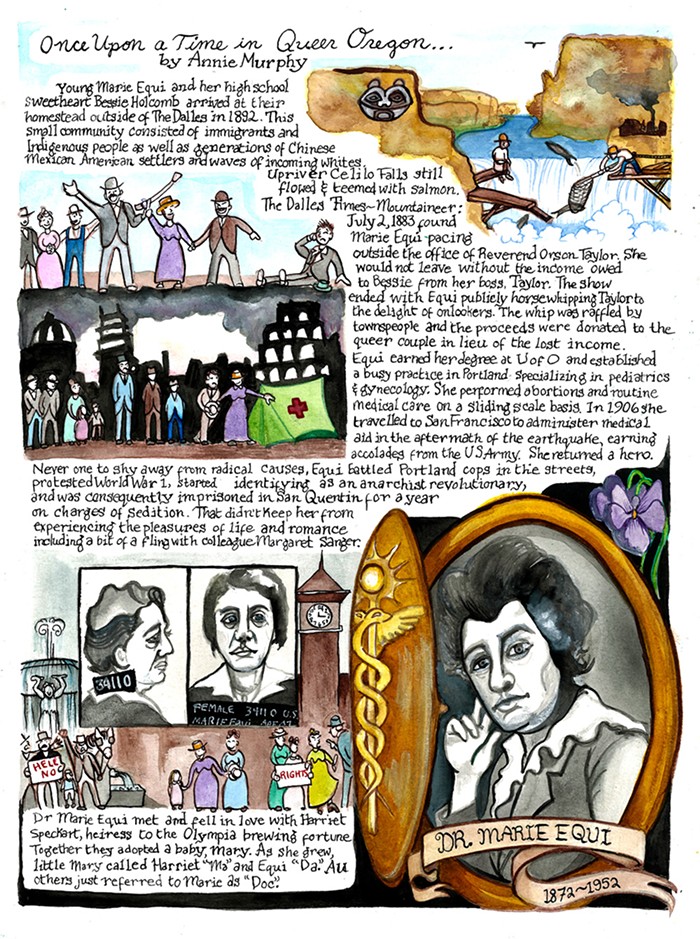 Young Marie Equi and her high school sweetheart Bessie Holcomb arrived at their homestead outside of The Dalles in 1892. This small community consisted of immigrants and Indigenous people as well as generations of Chinese Mexican America settlers and waves of incoming whites. Upriver Celilo Falls still flowed and teemed with salmon.

The Dalles Times-Mountaineer: July 12, 1883, found Marie Equi pacing outside the office of Reverend Orson Taylor. She would not leave without the income owed to Bessie from her boss, Taylor. The show ended with Equi publicly horsewhipping Taylor to the delight of onlookers. The whip was raffled by townspeople and the proceeds were donated to the queer couple in lieu of the lost income.

Equi earned her degree at U of O and established a busy practice in Portland specializing in pediatrics and gynocology .She performed abortions and routine medical care on a sliding scale bases. In 1906, she travelled to San Francisco to administer medical aid in the aftermath of the earthquake, earning accolades from the US Army. She returned a hero.

Never one to shy away from radical causes, Equi battled Portland cops in the streets, protested World War I, started identifying as an Anarchist Revolutionary, and was consequently imprisoned in San Quentin for a year on charges of sedition. That didn't keep her from experiencing the pleasures of life and romance, including a bit of a fling with colleague Margaret Sanger.

Dr. Marie Equi met and fell in love with Harriet Speckart, heiress to the Olympia brewing fortune. Totgerher they adopted a baby, Mary. As she grew, little Mary called Harriet "Ma" and Equi "Da." All others just referred to Marie as "Doc."

The Mercury’s Things to Do Pride Week Mega Calendar
Pride Waterfront Mainstage Schedule
The Feeling is Multiplied
The Heroes Inside
Once Upon a Time in Queer Oregon
W3 THR33
Wuvable Oaf: Comic and Paperdoll