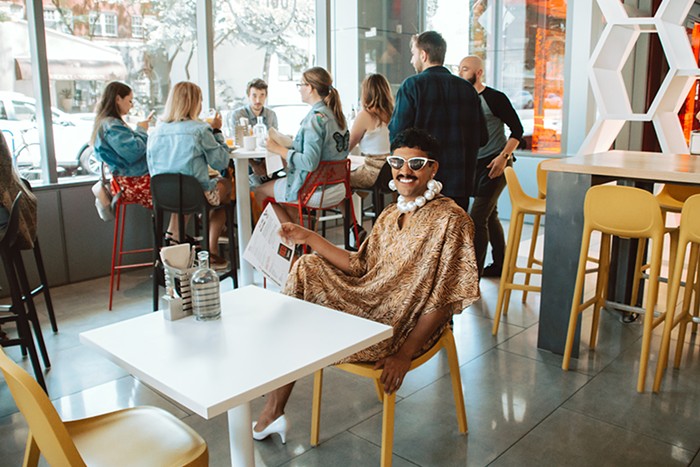 Profiles in Queer Excellence and Resilience

Genderqueer Artist Maarquii Could Be Portland’s Next Rap Star

Black & Brown Stripes: Catching Up with Some of Portland’s Most Interesting Queer People of Color

An Overview of Portland’s LGBTQ+ Nightlife for the Newcomer

I love brunch and I love queens. I demand the former and desperately desire the approval of the latter. (Please, I brought you all these dollar bills.) Portland has a long, lovely history with drag brunches, and while some of the original weekly shows (like those at the Mission Theater and CC Slaughters) have fallen to the wayside, others (Recovery at the RED) are just getting started or, like Night Light Lounge’s recently added Saturday shows, have had to expand to accommodate growing crowds. Whether you’re a longtime fan or a newbie, there’s a drag brunch in Portland for you.

Drag brunch at the Night Light Lounge is what most Portlanders think of when they’re looking for fun, community-focused drag. Though the Southeast Portland saloon has only been offering a drag brunch since March of last year, the shows have a reputation for jaw-dropping charm, outfits, and moves. I’ve seen Caravan of Glam star Jayla Rose Sullivan land a cartwheel down the restaurant’s middle aisle, which means Night Light gets a “10” for athletics.

Nae Nae also brings a lot of heart to the show. During a recent performance, she caught herself teasing an attractive straight couple and approached them to apologize, explaining that she’s trying to cut some of the traditional cattiness out of her banter because women competing and tearing each other down is too toxic to be funny anymore. Night Light is also one of those places where you can tell the staff really likes working there. They have the lounge’s L-shaped floor plan down and snake around each other—chilaquiles overhead, Jell-O shot concessionaires underfoot—with care. (Saturdays & Sundays, 11 am, Night Light Lounge, 2100 SE Clinton, $25-45)

Recovery at the RED

Katya’s Recovery at the RED is based on a brunch attended in Minneapolis, which takes place in a glass-enclosed, rooftop restaurant called Union. Radisson RED’s floor-to-ceiling windows were a big part of Katya’s vision: there’s a feeling of being outside, no matter what the weather is like. Through a Minneapolis connection, Katya met the Radisson RED’s General Manager, Luca Merino, and he—having also been to Union—immediately understood the feeling Katya wanted to create.

In addition to letting in all of the daylight, the Radisson RED’s windows allow for the show to be seen by passersby, showcasing queerness for anyone walking around downtown. “The queer community often feels confined,” Katya says. “We can express ourselves at nightclubs or dance parties, but there’s something wonderful about being really queer and yourself in the daylight.” Indeed, during a recent Recovery performance, two children from a curious family of four smooshed their faces to the glass and to their delight, the lip-syncing queen gave them a show.

Recovery has a low-key vibe, compared to other drag brunches in town, with a crowd that feels like a mix of first-timers and cute, sleepy queers meeting up with friends. (The Recovery name is a tongue-in-cheek play on both recovering from partying the night before and Katya’s sobriety.)

I was also pleasantly surprised to see lots of drag operating outside the traditional “female impersonation” category. The show included two drag kings (Phallus Johnson and Javier Miguel) and a few visiting Seattle performers who switched up the typical vamp-for-cash approach: Michete performed in a pillowcase-like dress without sleeves so she couldn’t even take tips, while Arson Nicki rode a hobby horse for the first half of her song before her set morphed into a hilarious drug nightmare. When Valerie DeVille descended the Radisson RED’s staircase in a full-on Game of Thrones Cersei Lannister battle gown (lip syncing to “Power Is Power”), I just about died from happiness. (Sundays, 11:30 am & 1 pm, Radisson RED, 1455 SW Broadway, $5 to reserve a table, $10 mimosa pitcher, $3 Bloody Marys and other drink specials)

What you’ve got going on at Stag is a rotating cast of MCs (Angelica D’Vil, Poison Waters, with co-hosts Kimberly Westwood, Shima B. Valentine, and Godiva DeVyne), each taking on a week of the month to add their own special spin to an already spun-up drag brunch in a gay men’s strip bar. There’s no stripping during brunch itself, but it’s bawdy and very old-school drag. I’m not saying that other drag shows don’t have big wigs, but these wigs are the biggest. Stag is simultaneously the spot most likely to scandalize my mom, but also what she’s most expecting. (Sundays, 12:30 pm, Stag, 317 NW Broadway, no cover, $15 brunch buffet, $5 Bloody Marys and other drink specials)