Classic character actor Abe Vigoda—star of TV's hilarious Barney Miller, and Sal Tessio in The Godfather—has passed away at the age of 94. His family says he died simply of "old age," and he will certainly be missed. If you've never seen him in action, check out this clip where his silence is golden.

All that being said, here's a related second tragedy: This idiotic headline and lead from ABC News (written by the AP).

Character actor Abe Vigoda, whose leathery, sunken-eyed face made him ideal for playing the over-the-hill detective Phil Fish in the 1970s TV series "Barney Miller" and the doomed Mafia soldier in "The Godfather," died Tuesday at age 94.

That's your lede? Reducing someone with a career as legendary as Abe Vigoda to "leathery, and sunken-eyed" is nothing less than fucking insulting to his memory and his grieving family. The story has a picture of Vigoda right there at the top—so why was it necessary to include such an ignorant opinion in the headline?

There was also this little note at the bottom:

Biographical material in this story was written by The Associated Press' late Hollywood correspondent Bob Thomas.

In other words, they've had this story sitting around for god knows how long, waiting for Vigoda to die. GHOULS. In fairness, ABC News wasn't the only one to run this loathsome headline. 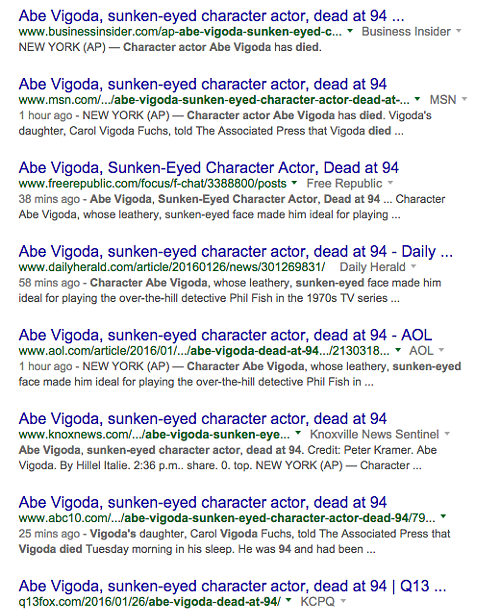