Ivana Müller's We Are Still Watching: Who Needs Actors? 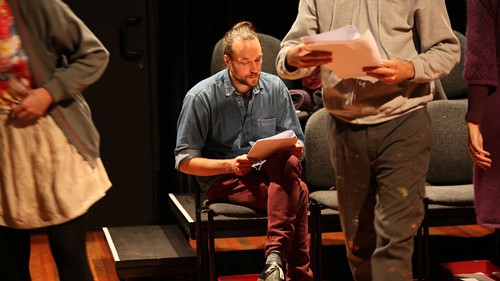 Yesterday I sat in a theater full of people I'd never met before, having a conversation. We were supposed to be seeing a play called We Are Still Watching, by the Croation-born, Paris-based artist Ivana Müller. Instead, we walked into a theater without a stage, sat in our assigned seats, and waited.

It was impossible not to notice that the pile of papers under my seat was enormous. I knew from the description of this piece that it would feature heavy audience participation, which I'd been kind of dreading. Now, apparently, one of the larger parts might go to me, just because of the seat I was assigned.

My worries turned out to be unwarranted. While the play was actually entirely audience participation, it was a surprisingly warm, easygoing experience. The script is clever—it's about the situation the audience is actually in: sitting, waiting for a play to start, slowly realizing that they are the play now. It's infinitely self-referential, as the audience members read scripted lines wondering why they're reading scripted lines, voicing hopes for the outcome of the performance, trying to relate to each other, or trying not to.

It's confusing, honestly, to realize that you are starting to think these people are who they are pretending to be. Nobody was really "acting," just reading the lines. And in fact, not even reading consistent lines, as the audience is regularly asked to pass the script to someone else.

The script sometimes made us suspicious ("Are there cameras recording this?" "Could some of us be planted here by the producers?"), flirtatious ("Maybe we'll all end up naked." "Maybe we'll make babies."), or turned us into the artists ("We should just write our own script!" "What if we are being recorded, and later the video will be projected on the wall?").

But it also pokes little holes in its own system, in order to poke holes in bigger, less obvious systems. There's a tiny part of the script that deals with voting: Are we truly together with people we vote similarly to? Is a vote actually our voice, or just part of the script we're reading?

The script constantly asks if we, the audience, are really together. And of course, the script is what brought us together, but it's also the thing keeping us from being together, by putting words in our mouths that aren't our own.

I walked out of the CoHo Theater wondering how I would ever talk to anyone again. Müller's lines had been so natural and credible that I had not only started to believe these other people were speaking honestly, I recalled my own lines as evidence of how I felt about the experience. I honestly still don't know if I was against this experience because I was against it, or because my "character" was. All I know is, I couldn't talk to another human being without a dose of suspicion for two hours. I wandered around in a daze, second-guessing everything, especially my own voice.

Tags: TBA Performance Thomas Ross Blogs
If you enjoy articles like this, please help the Mercury continue our mission of providing up-to-the-minute information, progressive journalism, and fun things to do in Portland by making a small recurring monthly contribution. Never forget: Your help is essential and very much appreciated!
CONTRIBUTE NOW