Monday night at the Works, dancer/choreographer Mike Barber's Ten Tiny Dances proved once again to be a crowd favorite. The performance series has been around since 2002 (with its first appearance at TBA in 2003—the very first year of TBA itself—and appearing at most TBA Festivals since then). I feel like this performance really took it to a new level, with people integrating video and installation in exciting and expansive ways.

If you’re unfamiliar with it: Ten Tiny Dances consists of 10 dances (duh) created for a four-by-four foot stage. The structure of the show, five-eight-minute performances with quick breaks in between, is a welcome punctuation for a 10-day arts festival like TBA (which, over time, can be mentally taxing, like running a conceptual art marathon). Ten Tiny Dances' Barber consistently does a great job of booking variety. There are serious performances and more goofy performances; there are group performers and individual performers, and some generally unforgettable stuff.

Last night, the show started with Beyoncé (always a good place to start). "Run the World (Girls)" played over the loudspeaker, while three people covered like ghosts in a gold sequined fabric took to the stage, hoisting a young girl into the air. The young performer then proceeded to do laybacks and mesmerize the audience with hypnotic hand gestures. This performance was thanks to Keith Hennessy (who has been to TBA a few years now, and has performed at Ten Tiny Dances previously).

Another standout from Monday night, working in a different, more verbal and wacky style, came from Michelle Ellsworth, whose “Clytigation: A Primer” was comprised of “dance, video, text, web design, and performance installation.” Ellsworth took to the stage with a nervous energy, and explained her connection to the ancient Greek story of Clytemnestra, and her attempts to avoid modern-day surveillance, which involves avoiding the internet and creating her own version of the internet, and impersonating her friends and carrying on conversations with herself as her friends. There was a lot of fast-talking and gesturing wildly with her hands. There was also an interactive installation component, which included a blue box where you could ride a stationery bike. Ellsworth performs through Thursday, as part of her Preparation for the Obsolescence of the Y Chromosome project.

On a more serious note, James Healy took the stage midway through the evening with something like an introverted ode to Yves Klein’s Blue. Looking very pasty, and with the utmost body control, Healy spun around on the stage, below a post-minimalist mirrored cube hanging in the air from a rope. The cube dripped an ultramarine blue liquid all over him. It was one of the more visually striking pieces of the night, with lots of people grabbing their cell phones and snapping pictures. 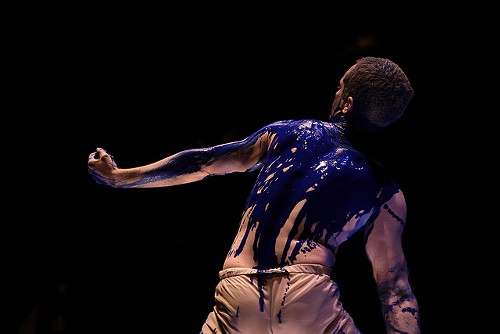 Vincent Michael Lopez’s performance came later, and was performed with the same kind of intense body control, although more balletic. The piece was called “Season in Dhaka."

Rounding out the night was Jen Hackworth, who offered a whole range of emotions. She took to the stage with swaggering bravado, running in with music blasting, then taking the stage and quivering to this tender music ("Lullaby for Liquid Pig" by Lisa Germano), which served as a super fragile stark contrast: lovely, but also comical. At the end of her performance, her arms were again high in the air, in victory pose, finishing it off with high fives from the audience.

In a contemporary world where art can be absolutely anything, sometimes limitations and obstructions help to reign it in, and actually make something that’s more engaging and exciting. That's definitely the case with Ten Tiny Dances. My fingers are crossed for its return to TBA next year.

Tags: TBA Blogs
If you enjoy articles like this, please help the Mercury continue our mission of providing up-to-the-minute information, progressive journalism, and fun things to do in Portland by making a small recurring monthly contribution. Never forget: Your help is essential and very much appreciated!
CONTRIBUTE NOW