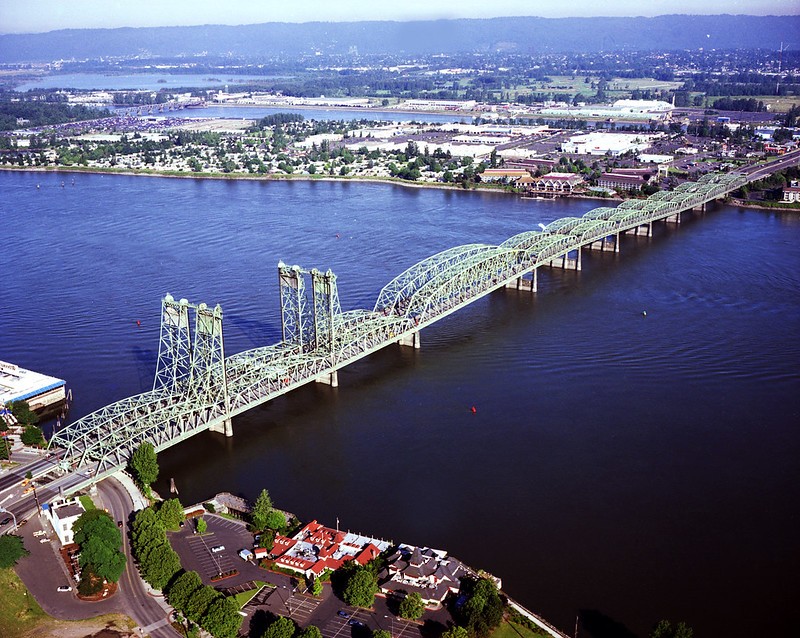 The long-planned replacement of the Interstate 5 bridge connecting Portland and Vancouver is expected to cost between $5 billion and $7.5 billion, new project estimates show. The new estimate—developed by Oregon and Washington’s joint project taskforce, the Interstate Bridge Replacement Program (IBR)—is approximately a 56 percent increase over the 2020 cost estimate, which pegged the project at $3.2 billion to $4.8 billion based on a previous iteration of the project. How Oregon and Washington will finance the bulk of the project cost is still unknown, though the project team has identified possible revenue streams that could cover the cost.

“We are confident that the program will land within the projected cost estimate range, and we are actively working to secure funding and manage cost escalation risks,” said IBR program administrator Greg Johnson in a press release Friday.

Replacing the I-5 bridge spanning the Columbia River has been labeled a priority by both Oregon and Washington leaders for well over a decade. Studies indicate that the bridge is seismic vulnerable and could fall into the river during a magnitude 9 earthquake. State leaders also want to reduce congestion on the I-5 bridge, which is a major freight route—an estimated $71 million in freight deliveries crossed the bridge daily in 2017. A previous attempt to replace the bridge, a project called the Columbia River Crossing (CRC), failed in 2014 after Oregon and Washington were unable to develop a joint funding plan.

Oregon Governor Kate Brown and Washington Governor Jay Inslee resurrected the project in 2019 and gave it a new name: the Interstate Bridge Replacement (IBR). As the project has rumbled forward, the cost estimate has still been based on the former CRC project, adjusted for inflation.

The new cost estimate, released Friday, takes into account the latest bridge design—eight travel lanes with high-capacity light rail—, the reconfigurations of multiple interchanges on both sides of the river, and the impact of rising material costs. The cost range also factors in a possible worker shortage and room for additional escalating costs.

According to Johnson, the toll revenue estimates are based on pre-existing estimates from the CRC project. Johnson did not address the Mercury’s question of what toll price the estimate was based on. The Oregon Department of Transportation (ODOT) is currently developing a tolling plan for a portion of Interstate 205, which proposes a $2 toll per bridge a driver passes at peak hours. For some daily commuters, that would equate to $8 per day, or about $2,000 per year in tolls. It’s unclear if the tolls implemented on the I-5 bridge would be comparable to the I-205 tolls.

State Representative Khanh Pham, a member of the joint Oregon and Washington legislative committee overseeing the IBR project, told the Mercury that the increase in the IBR project’s expected cost is not surprising, but still a serious concern for Oregon lawmakers who are balancing many other requests for transportation investments.

"Our job as legislators is to make sure Oregonians are getting the best deal, and that we ensure that transportation investments bring down costs of living for Oregonians, reduce climate pollution in line with our policy goals, and make our commutes safer and more enjoyable,” Pham said. “I think lawmakers are right to be raising questions [about rising costs].”

Pham sees the updated cost estimate as a way to ground the IBR bridge design in reality. When transportation leaders from Portland and Vancouver were determining the updated bridge design earlier this year, they were endorsing design elements without knowing the price tags. Now, with a more accurate understanding of what the project design will cost, it’s legislators' job to fit the project into a reasonable budget.

Some design elements of the bridge have already been subject to significant criticism. The US Coast Guard found that the current bridge design is too low for some ships to pass under. The IBR team, which needs the Coast Guard’s approval to build the bridge, believes it can convince the agency to sign off on the low bridge anyways. Some local politicians in Portland and Metro have raised concerns that the IBR project area stretches far past the bridge, including rebuilding and expanding multiple highway interchanges in Vancouver. A forensic analysis of the bridge design and original cost estimate by an independent accountant indicated that the cost of strictly replacing the bridge is less than 30 percent of the total project cost. Economist—and longtime critic of both the CRC and IBR projects—Joe Cortright characterized the project as buying a new car and calling it a tire replacement.

The increased cost estimate also drew skepticism from the Just Crossing Alliance, a group of 32 environmental and transportation organizations on both sides of the river.

“The Just Crossing Alliance supports a seismically resilient crossing for Interstate 5, but ODOT is once again demonstrating they do not have this highway expansion project under financial control, which could jeopardize the potential of replacing the bridge and adding needed public transit options,” the organization said in a press release.

“As we're contemplating billions of dollars in freeway expansion spending in the Portland area,” Pham said, “I want to make sure that we are not going to drag Oregon into debt that then leaves us empty handed when it comes to funding basic road maintenance in other parts of the state and also safety improvements that are a life or death issue for our community.”