Worst. Night. Ever.: A Brainwashed Liberal from a Pinko Commie Rag Checks Out the Gun and Knife Show 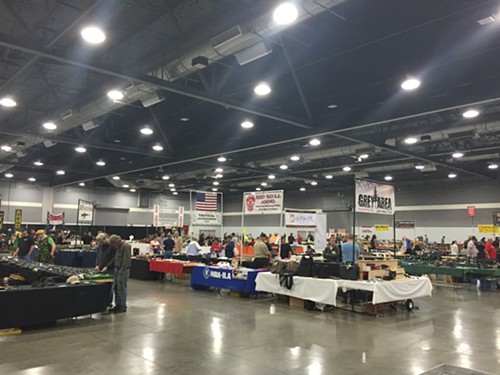 What did you do for Father’s Day? Oh, that sounds nice! I went to the Collectors West Gun and Knife Show, which stops through the Portland Expo Center six times a year. No, I didn’t go with my dad. (Last place in the world he would want to go, bless his pacifist-coward heart.) I went for my annual spin on the Worst Night Ever wheel of destiny (go here for Shelby's!), after a nail-biting voting process in which Blogtown readers submitted their votes to send me to what they deemed the most uncomfortable situation for me. Remember? Remember that, guys? Remember when you all voted to send me to the gun and knife show? (No? Well, maybe you remember sending me to this last year. Do you still feel bad about that? Good.)

As you might have guessed from the first paragraph, I didn’t grow up around guns. I don’t have any affection for or interest in guns. I don’t own or use guns. I never have fired a real one. I doubt I ever will. I don’t say this to proselytize, but rather to provide a frame of reference. I am not a person even casually interested in guns in real life, so therefore I was a suitable candidate to attend the gun show for the purposes of this blog series.

(Sidebar: Actually, I think guns in books and movies are cool. I really like movies that have lots of shootouts in them, ones in which characters are habitually packing—from westerns to James Bond flicks to detective-noir cop stuff. I like pretend guns that kill fictitious people in imaginary worlds. That’s fun! I am delighted by books about spies and gangsters. I will happily watch a full weekend’s worth of movies with guns in them and be thrilled by each and every bang. Bang bang bang! But if you bring a real gun into the room? No thanks.) 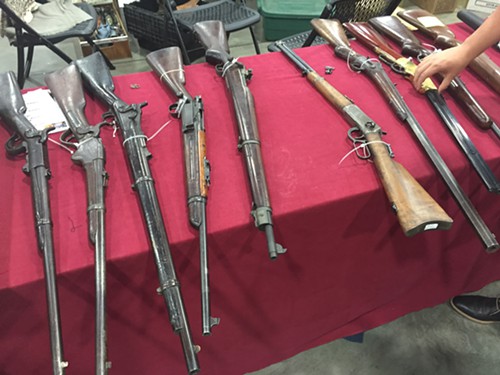 There are a few converging elements at the Collectors West Gun and Knife Show—as suggested by the event’s title, there are the collectors, who deal in antiques. This stuff is actually kind of cool. I saw some old-timey rifles, all of which were cheaper than I would have expected, which makes me think the collectors market in antique guns in the Northwest is pretty soft. Lot of Winchesters and the like. Some of them probably killed buffalo! I mean bison. And surely two or three of them shot a wolf. Maybe one of those guns even killed a man. You don’t know. You just don’t know. 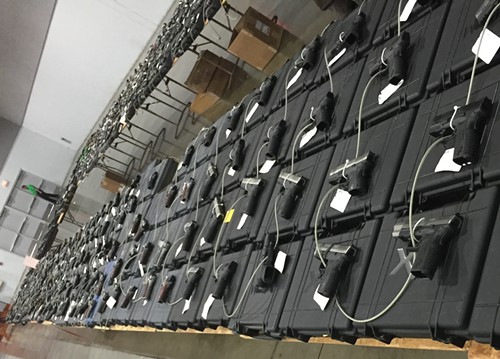 Then there are the handguns, which are the third shittiest invention mankind has ever produced. (Assault rifles are the first shittiest, and there were some of these at the show, too; Keurigs are the second shittiest.) Unlike rifles, which are used to kill edible game and, like, bears and stuff, handguns are meant only to kill other people. They’re intended to be concealed away invisibly in your pocket, to be pulled out in situations in which another human being is intended to die. Ever see someone hunt a deer with a handgun? No, you haven’t. Ever see someone pop a quail out of the sky with a pistol? You lie. Follow-up question: What percentage of people killed by guns in the US this year were killed by handguns? The overwhelming majority, right? 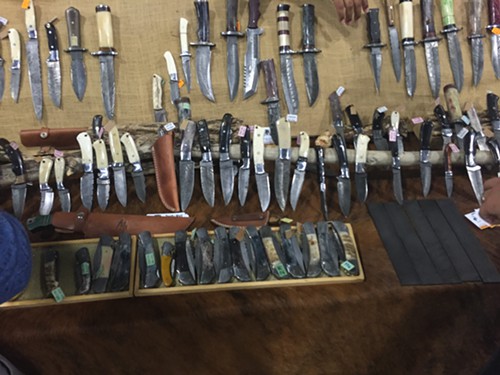 Then there are the knives. Knives are badass. I have no quarrel with you, knives. I will go see a knife show any day of the week. Stuff’s gotta get cut somehow, amirite? Strings, and… meat… and, um… vines and stuff. Go knives! 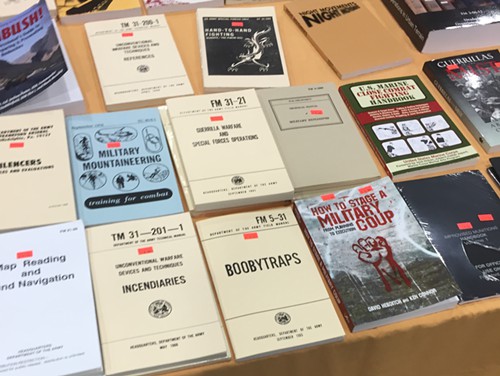 THEN there are the survivalists. The SHTF crowd. The "preppers." The doomsday-sayers. The “get off my land” dudes (they’re all dudes). This was the weirdest, most interesting, scariest/funniest part of the gun show. SHTF, if you don’t know, stands for “Shit Hits the Fan,” and there is a robust sub-sect of grown white men who deeply and truly believe that—in our lifetime—the government will collapse, society will crumble, and all preceding traces of human evolution, interaction, and development will be instantaneously eradicated, and that every surviving person will become a rabid, murderous psychopath, out to trespass upon the homesteads and gorge upon the stockpiles of good, honest, hard-working SHTFers. As everybody else knows, SHTFers are completely crazy, so it must be nice for them to get out of their bunkers six times a year and mingle with each other at the Collectors West Gun and Knife Show.

One man was handing out pieces of paper that contained a personal essay he'd written. “Give this to your liberal friends,” he instructed me, so that is what I am doing. Here you go! His essay’s called “'I’ll Come to Your Place When SHTF'—No You Won’t” and the gist of it is that you are not welcome at his house when the world ends. Because you are just going to infringe upon his stores of Nutter Butters and potable water! Do your own prepping, you lazy good-for-nothings. The piece also suggests that his time-consuming hobby of SHTFing has put a surprising strain on his marriage. Here’s a link to the essay, which has garnered 625 online comments so far, meaning that this author is exponentially more widely read than I, or anyone at this commie rag, will ever be. (I also recommend seeking out his website, which includes other eye-opening works like “Your Wife Never Got Raped by a Garden” and “Why I Would Trade 1.7 Million Hipsters for One Mildly Retarded Man."

This author was my favorite thing at the gun and knife show.

The whole place was pretty sleepy at the time I visited, which was during the final hours of a three-day stint. One of the vendors commented to me that the weekend had been quiet overall. The large, echoing exhibition hall felt eerily silent; some of the vendors were even packing up their booths before the show ended. The remaining vendors were attentive and friendly—the NRA recruitment guy really wanted to talk—but there was a sense of business-as-usual, that all these people had been to numerous shows before and that this one was nothing special.

I didn’t walk out of there with a gun, but I guess I could have. Or I can just go back this weekend—there’s another Collectors West Gun and Knife Show happening at the Expo Center this Friday through Sunday! God bless America.

Also, there was jerky! 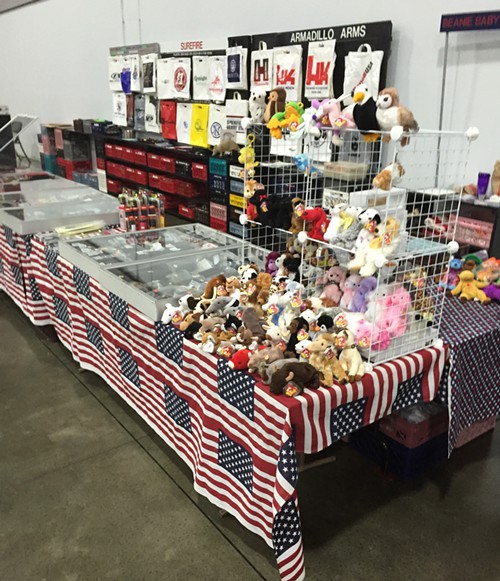 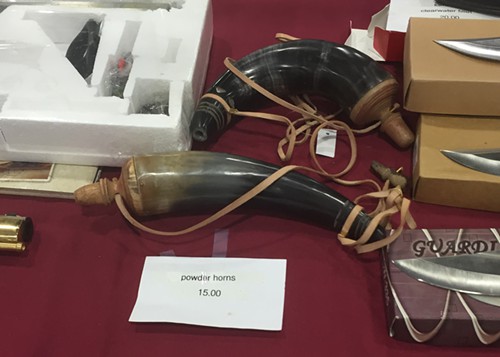 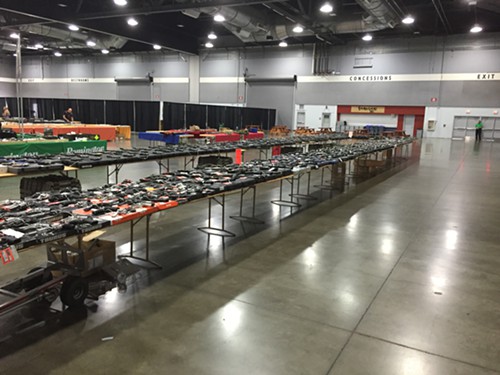