Welcome to the Blogtown series we like to call Worst. Night. Ever.

Every Wednesday during our weekly "My, What a Busy Week!" pitch meetings, someone suggests an event which is the equivalent of shooting burning acid into our eyes—but we also realize a more enlightened person might love it! Hence, these "risky" events are often unfairly pushed aside. WELL, NO MORE. Instead of allowing these events to vanish forever, once a year—and only for Worst. Night. Ever.—we attend them. We write about them. We share with you, dear readers, our Worst. Nights. Ever.

Each member of the Mercury's editorial staff will be presented with events that do not match their personality or interests... like, AT ALL. Afterward, he or she will review it right here on the blog! NOTE: Everyone's taste is different, right? So while attending a "weird sex ecstatic dance naked thing" might make Ned absolutely miserable, Dirk would probably love it! As ever, competitors must stay for at least two hours (or until the event is over, whichever comes first) and are not allowed to get drunk, or use any substances (drugs) or distractions (phone/reading material) to dull the pain they may experience.

Next up: Marjorie "competes" in a "kiteboarding" "contest":

I've seen much, much worse when it comes to WNE. There was the time I risked my safety and sanity to spend the night in the pouring rain with a bunch of drugged hippies, or the time I had to spend an entire weekend wearing humiliating footwear, for instance. So driving out to beautiful Hood River to try kiteboarding for the first time hardly seemed like the "worst" thing that could happen to me this year. Even if I had to Google what exactly kiteboarding entails, and even if my first time trying it would be as a contestant in a kiteboarding race. 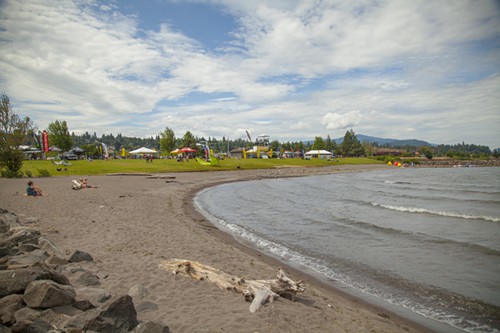 Have I mentioned that I broke my leg?

Oh no no, I didn't break my leg kiteboarding for W.N.E. I broke it early this past spring (freak jogging accident) and had to have a titanium plate screwed into the bone, and spent two months commuting to work in a wheelchair. Spending time off your feet like that definitely gives you a new appreciation for physical activity, and I still think it's pretty neat-o that I can walk, drive, do yoga, attend gym classes, and make pathetic and painful attempts at running again.

So, I was actually kind of psyched for this. While not at all my scene, I figured I might learn something and get some exercise. Plus the race I was to enter was specifically geared to people who had never kiteboarded before, so it seemed like an even playing field. The race itself was something of a footnote to a larger event, "Kiteboarding for Cancer," in which sponsored people who actually know what they're doing complete a much longer course through the Gorge. When I arrived on the scene it seemed like most people were just hanging out in between those departures and arrivals, sitting in the sun and patronizing a small clutch of food vendors. 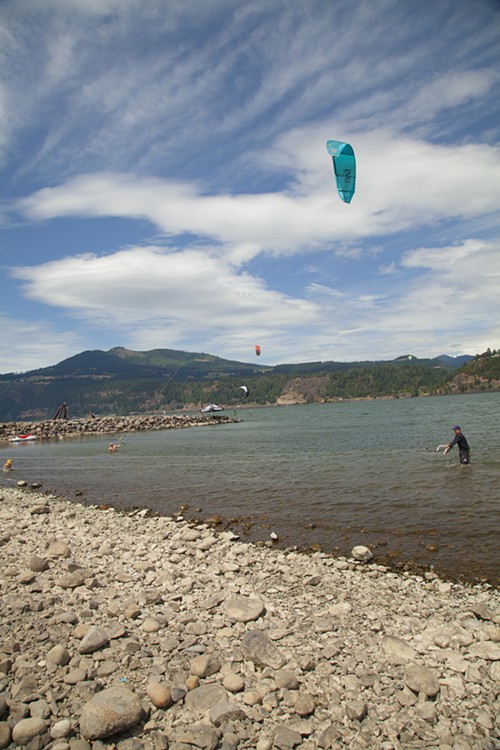 As it turned out, the organizers had never tried a "never-before kiteboarded" race before either, so now everyone knows: They're a total shit show.

To back up a bit, all I knew going into it was that us noobs would be given some instruction (and use of some equipment), and then we'd have to complete a course. I assumed it would be easy and safe, and I wasn't wrong about that—it was just far more embarrassing than I hoped. For one thing, the experienced kiteboarders were recruited just before the race—people with loudspeakers basically guilted the pros who were hanging out into it—while us "never-befores" waited humbly on the grass. The 'boarder I was eventually paired with was named Andrew, and while he was very kind, I don't think he know what he was getting into either.

Here's how it went: Never minding that it's called kiteboarding, each mentor donated use of their own kite—sans board—beginning with it all rolled up and put away. Our mentors were to only give us verbal instruction—no touching—while we set it up. They would then move into the water while we launched the kite from the shore, and then we were supposed to run into the water (over a giant patch of rocks) and... well, just kind of hang onto them for dear life while they did what's called a "body drag" (appropriately named since you basically let the kite drag your ass through the water) around a buoy. Then, when we reached the shore on the other side, we—again, with no help other than verbal—had to pack the kite back up and run, carrying it to the finish line.

I have to admit that while this sounded less dangerous than what I'd imagined, it also sounded like having to do the chore-y parts of pitching and taking down a camping tent, but without all the actual fun camping parts in between. I also knew the whole "running back to the finish line" thing wasn't gonna happen for me. No problem: I'd just get my setup and takedown chores done super fast to make up for it.

Suuuuuuure. Well, it turns out that getting a kiteboarding kite set up takes a ton of space, and it's a touchy process! You have to lay out not only the kite itself but the very long strings that keep you attached to said kite. And those strings have to be knotted into these tiny loop things that are hidden on different parts of the giant kite. Oh, and Andrew apologized because his kite has more tiny hidden knot loops on it than most people's, but the good news is that means it's "safer." PHEW. 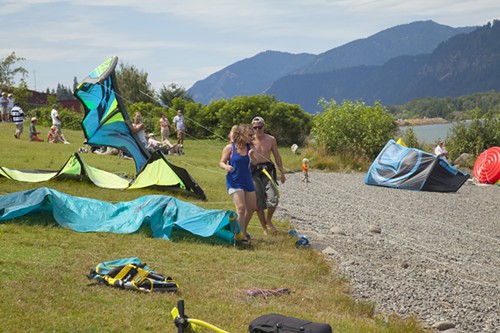 When there are people all around you who also don't know what's going on, and you're all laying out super long strings all over the waterfront next to each other, sometimes your strings and their strings might touch or cross over each other and stuff, which is fine... EXCEPT FOR WHEN IT'S NOT!! Those times mean you have to start over. :(

When the strings were finally draped scientifically all over the rocks, it was time to put some air into the kite. I was pretty good at this part, because I already knew how a bike pump works. However! What I did not anticipate was, when I went to close up the connection to the kite, how much air would escape! I don't know what I did wrong, and Andrew had no time to explain. The announcer had just mentioned that the first team was already in the water! He wondered momentarily if I should put some more air in, but looked around and saw that now somehow almost everyone else was getting into the water too and said something like "fuck it." 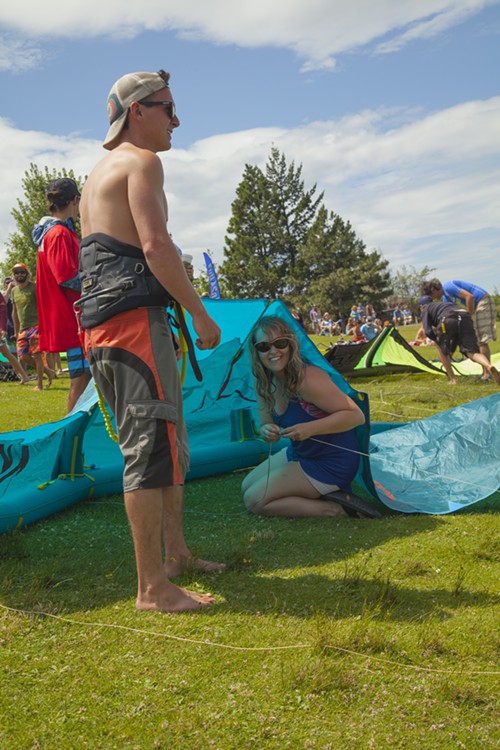 He ran over to the strings end, and had me lift the kite in the air and let g—NO, WAIT!!! It was upside down! The kite's wingspan was like four or five times the length of my entire body, so flipping it around and preventing it from flying off willy-nilly took me... just a minute here... oops, I just clipped some bystanders, and... got it! Success! We had kite launch. Now I just had to get back down to Andrew through the giant field of sharp rocks lining the shore in bare feet! 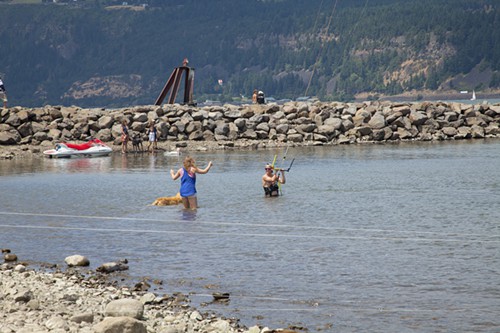 I made it to the water! Nope—more rocks in there. Slippery! Hang on... almost there. Aaaaaaaaand there.

This was the easy part: Just hang on to this complete stranger's bare torso while the force of the wind dragged us. All I had to do was try to keep my head out of the water and my shorts from falling off. It was fun for a second! Then our kite kind of... lost its wind. It touched the water. For a minute I thought we were going to have to swim, then I realized that we were only in water that was like four fucking feet deep. I waved Andrew off to go collect his kite while I minced to shore over the damn rocks again.

Then it was untie the knots, fold up the kite... and, sorry but, walk to the finish line. Not that it mattered. We were so far behind there wasn't even another contestant making their way to the finish line at the same time I was.

IMPORTANT NOTE: We were not dead last, at least that's what Andrew told me. I don't know—I never looked back. I just went to the closest microbrewery and thought about how much I hate knots, and how another great thing about running is that you don't need a kite for it. Congratulations! While this was in no way the worst of the Worst Nights I've ever had, it was super annoying and made me feel totally incompetent!

And I still don't know how to kiteboard!

Tags: Worst. Night. Ever. Blogs
If you enjoy articles like this, please help the Mercury continue our mission of providing up-to-the-minute information, progressive journalism, and fun things to do in Portland by making a small recurring monthly contribution. Never forget: Your help is essential and very much appreciated!
CONTRIBUTE NOW