There's no way to really explain my Worst. Night. Ever. without first mentioning Mondor.

Mondor is a wizard. He's a wizard who seems to have crippling impotence where magic is concerned, because when you first meet him, Mondor is hysterical. A halfling species called Grumpkins is in peril at the hands of some faceless evil, but Mondor's not doing a god damn thing about it. He's just standing there, gesticulating woodenly, ordering you to save them.

You've got a laser gun and a magic cart. Also, you're at Enchanted Forest, that mega-weird, mega-charming amusement park just south of Salem where I must urge you not to order the nacho cheese fries in a fit of hubris.

The Challenge of Mondor is incontrovertibly Enchanted Forest's best feature. It's a ride-arcade game hybrid that ushers you through a dark cave glittering with peril and blue targets. Hit the targets with your laser gun and you get points. The person with the current highest daily score gets a medal like the one I'm looking at on my desk right now. 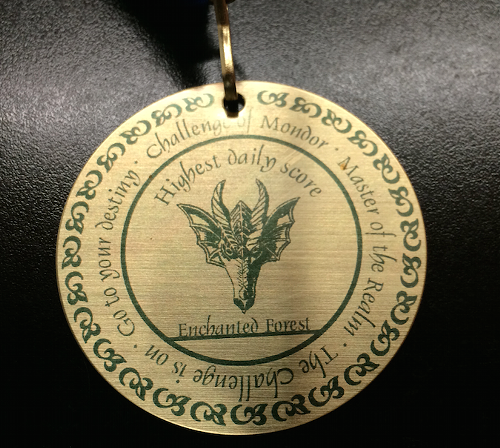 It turns out I'm a Mondor prodigy, a fact that caught Merc Senior Editor Erik Henriksen completely off guard. Weeks and weeks before we headed down I-5, Erik learned I had never been to Enchanted Forest before and, perhaps believing he sensed weakness, challenged me to battle him in the Cave of Mondor—a Mon-duel, if you will.

I accepted, and it became very clear early on that August morning that I possessed a special talent.

Erik and I went through the ride three times, and each time he lost handily. On the third expedition, I cracked 3,000 points, qualifying me as a "Master of the Realm" by the game's standards, while Erik limped lamely behind.

All that hot-dogging on my part turned a lot of heads, including that of the guy running the Challenge of Mondor that day, who ended up making us a quiet offer: He'd allow us to go through the ride one at a time rather than in a group, thereby limiting competition for targets and giving us a real shot at the high score and glory. We accepted.

Erik went through first, and failed miserably. Grumpkins were slaughtered and tortured, and Mondor the Wizard died of shame.

I followed, emerging from the cavern with 4,110 points, thereby smashing the existing high score set by a woman named Bobbi!

The guy running the ride announced my name to the waiting throngs, while a girl who worked for Enchanted Forest placed the medal around my neck as if knighting me (I sort of made her do this). I erased Bobbi's name and previous high score from a dry-erase board, and wrote mine in.

Five minutes later, after buying a celebratory popcorn, my medal glinting along the midway, I heard a kid whisper urgently: "Mommy, he's the champion of that game!" It was a fine time to be alive.

But not for Erik, thin-lipped and petulant. He went instantly pekid, and marched back into the now-long line to give it another try, forcing confused children to wait while he insisted on riding in the four-person cart alone.

And when Erik was done? He'd beaten my score by exactly one shot.

I was ecstatic! Confident in my record (4-0 when Erik and I went head-to-head) and happy the underdog got a medal for a change, I even asked Merc Editor-in-Chief Wm. Steven Humphrey to snap this photo. 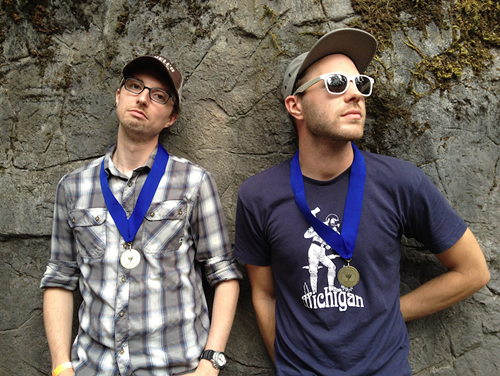 It was, as I say, a fine time to be alive... until things turned dark.

Erik—evidently forgetting his many defeats at my hand—became what I'd be tempted to call "power drunk" if I thought you could derive power from winning a carnie's trinket. He started boasting endlessly about his "victory" on social media, and even began a weird campaign to get me "banished from Mondor," which I'll remind you is a wizard, not a realm (though, as you'll see from what follows, he baited me into this shorthand). Here is an actual conversation: 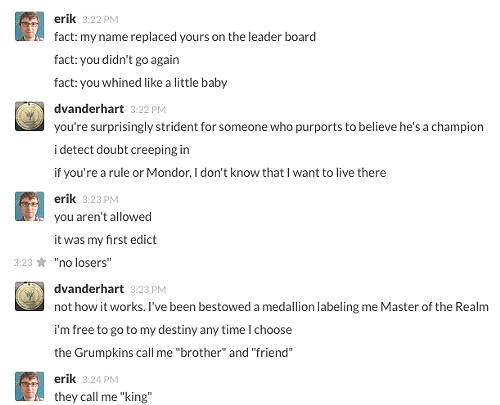 I recount this all not to make light of Erik's descent into madness, but because it has direct bearing on my Worst. Night. Ever.

See, shortly before the "Mondor Incident," I'd accepted another challenge of Erik's: To buy him Star Wars toys.

It was mid August, and Erik had recently become obsessed with "Force Friday" the Disney cash bacchanalia in which thousands of Star Wars fans around the country would queue up outside their favorite retailers prior to midnight on September 4, then rush for the newly released tchotchkes and doo-dads from the forthcoming The Force Awakens. (Notice the trend here? Trinkets loom absurdly large in Erik's world.)

Here's some solid background from Merc Calendar Editor Bobby Roberts, whom, as CNN reports, the "force is strong with."

The conceit, when I accepted this Worst. Night., was simple. I'd brave some of America's shabbier capitalist tendencies, maybe risk getting trampled if things went really well, and learn something about the nature of fandom and manipulation in the process.

But after Mondor and all of Erik's "king" talk, the whole mission took on a leering and sinister hue. His every gesture in my direction—to say nothing of his peacocking about the office wearing his Mondor medal—made one thing abundantly clear: He viewed me as his thrall, and believed it was my duty to buy him Star Wars toys.

I've been belittled by Scientologists and forced to choke down hot dogs while at the Mercury, but this is the stuff true Worst. Nights .Ever. are made of.

Here's Erik's shopping list. His expectation was that I purchase him three toys:

• Anything Poe Dameron-related, but particularly Poe Dameron's Black Squadron X-wing, because that shit is awesome (NOTE: this item, as with the First Order Special Forces TIE Fighter, can count as three toys, because I am not made of money and these will be more expensive than the action figures)
• Captain Phasma action figure
• B'offo Denots action figure
• Finn (Starkiller Base) action figure

I won't lie, I considered welshing—and not only because of the bafflingly regal affect Henriksen had begun to put on. Last year, I concocted what I believed was a perfect Worst. Night. for Erik, and Blogtown readers agreed. It was simple, really. He had to attend a doll and teddy bear show, and haggle with five people for their dolls. Here's the exact phrasing that YOU voted on.

We think it would be amusing if Erik assumed the air of an avid doll enthusiast, perusing the booths for hidden treasures and criticizing wares in order to get a bargain price. For this Worst. Night., he'll need to critique some aspect of a doll or Teddy's condition (say, commenting on its sloppy bisque restoration or suggesting it's got a "harlot's sneer") then, immediately afterward, pull out his wallet and offer to purchase it for a dollar. Five times.

Conceiving of this mission is probably still my greatest contribution to this paper, but Erik didn't do it! He just went to the show and walked around like a jerk. So I toyed with the idea of doing the same. It didn't go well. 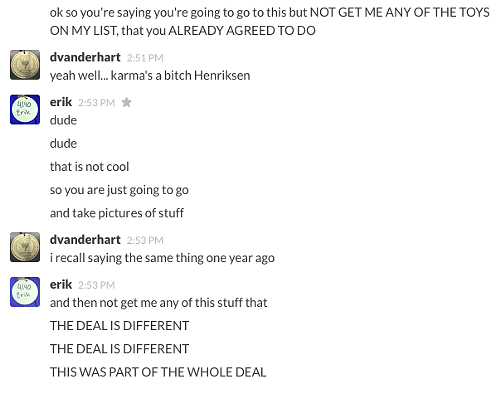 I set out for Jantzen Beach at 10:45 pm on September 3, figuring I'd wait outside the Target there for an hour and make my miserable walk to the toy section at midnight. Erik had assured me that "people will turn the fuck up to buy shit at the Jantzen Beach Target." Here's what I found on arrival: 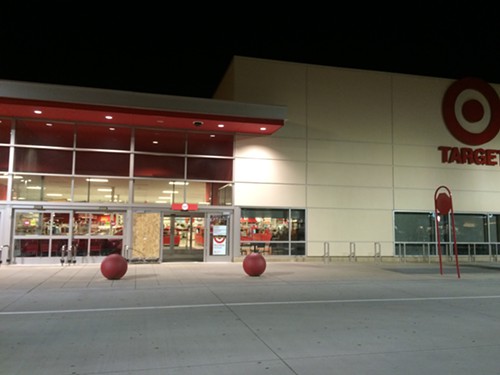 Nothing. A young bespectacled woman was locking the place up, and when I asked her about Force Friday informed me (not even a little patronizingly) "we're not one of those stores." Then she faded back into the darkening Target. A lone SUV that had been idling in the parking lot pulled away. I was alone.

But I pressed on. There's a Toys 'R' Us right across the parking lot from Target, so I tooled over that way and found this. 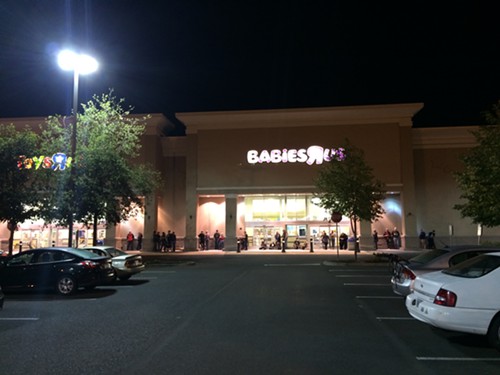 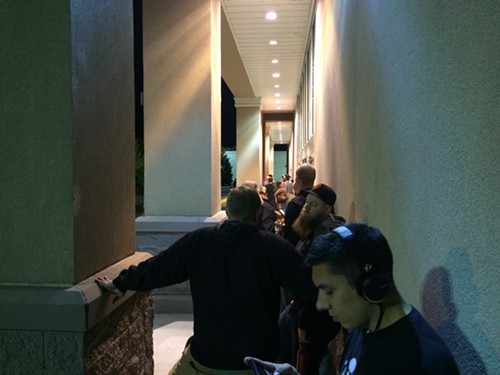 Camaraderie! Shared interests! A good 25 to 40 people waiting in line—like me—with their hearts set on meaningless plastic, and more were showing up all the time!

Look at that picture up above. See the guy with the headphones? He'd been drinking since 5 pm, and had his heart set on the $150 BB-8 remote control toy. He repeated again and again that he mainly wanted it so he could "scare the shit" out of his cat and dog. He figured everyone else in line had the same idea, and that he'd be out of luck by the time he got back to the toy section. I told him not to give up hope, and he said "A New Hope," and laughed (ruefully, I thought). "How new is your hope?" Then he put his headphones back on and started listening to heavy metal.

I was pretty sure the whole "scare the shit" out of pets thing was a facade, that the guy was trying to put up a weird masculine front for wanting an overpriced R/C car, but it turns out basically everyone wants to scare puppies with the BB-8.

On the other side of me, two bro-ish dudes rolled up and immediately began talking about drinking Four Lokos or going on a run for forties (which I encouraged). I asked what toys they wanted, and neither had any real idea. I assumed they were interlopers who'd come to try to purchase toys and flip them on the Internet, but then one of them made reference to obscure Jedi knight Kit Fisto, prompting me to re-evaluate.

Then the other one of them decided to get on Tindr on his phone, and found a woman who was 300 feet away, meaning probably in the line somewhere (or in the store?).

"She got a big-ass face," one of the Star Wars bros said.

"You ain't never lie," the other replied.

I stopped talking to them.

The rest of the people in line were pleasant. We talked about Jar-Jar Binks and Brienne of Tarth. At one point a guy from the front of the line came back to us and asked if anybody remembered Homestar Runner. No one did but me. The guy was impressed.

Erik, throughout all this, had begun to envision himself as a Ben Kenobi-like figure, doling out advice and encouragement from the afterlife (or text message, in Erik's case). "Shit's gonna get like Lord of the Flies," he wrote. "Don't be Piggy."

Then it was midnight, time to trample or be trampled. I laced up my shoes and tightened my belt a notch, preparing to fend off ceaseless 'bows... and we all just walked calmly, quietly, a little solemnly, back to the toy section.

But not without first shaking hands with the man himself.

There's nothing interesting to say here, honestly. I walked back to a specific aisle in a toy store, said "excuse me" a couple of times, and promptly found three of the action figures Erik had requested. It was chill as hell—partly because Erik has a peasant's tastes in Star Wars and no one wanted what he did. 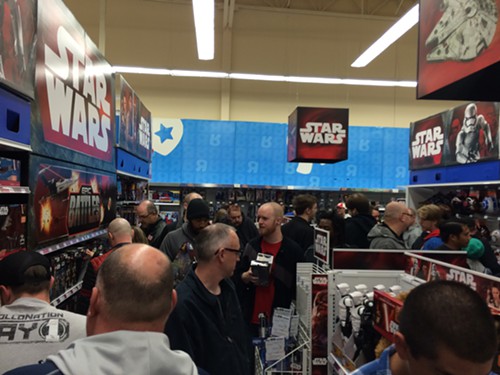 We say this all the time at Worst. Night. Ever., but it wound up not being so bad. Sure, Erik was condescending and loathsome for weeks on end, but it was only through those antics that I began to grasp the true meaning of the Force: Sometimes, it's okay to let Erik think he won.

"Good job, Dirk," he wrote me after I'd purchased his toys. "You truly are a hero of the Rebellion, and I will bring you $24 tomorrow."

Here are the toys I got Erik, and how they look at his desk. 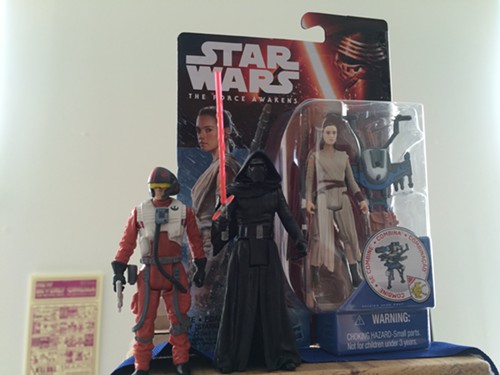 Comments 6
Tags: Worst. Night. Ever. Blogs
If you enjoy articles like this, please help the Mercury continue our mission of providing up-to-the-minute information, progressive journalism, and fun things to do in Portland by making a small recurring monthly contribution. Never forget: Your help is essential and very much appreciated!
CONTRIBUTE NOW