With the impending financial collapse of the anti-Bush tchotchke market, bumperstickered Subaru owners and political punsters everywhere are going to be wondering: what's next? Luckily, this guy right around the corner from the Mercury office has a lawn full of ideas. Check out his house on 19th and Irving: 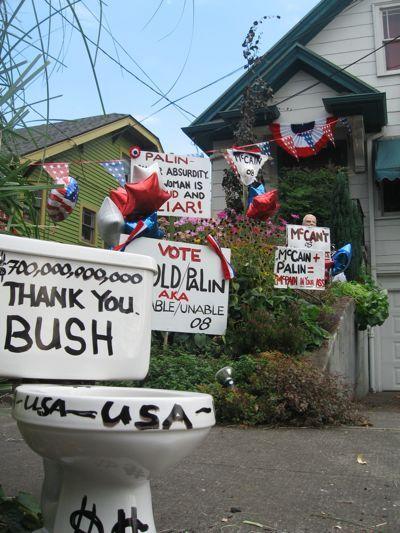 That's a John McCain flag made from a Depends and - who's that in the wheelchair at the back? 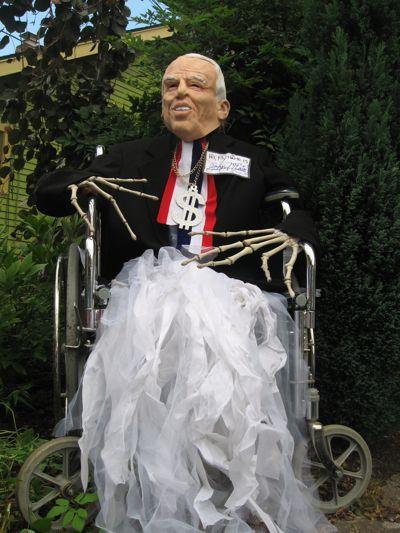 The war hero himself! It's those kind of elaborate props that win homeowner Michael de Lapp the award for Most Enthusiastic Liberal Yard Decorator. De Lapp, a freelance designer and event planner, explained that the signs, toilet and skeletal McCain are leftovers from a crazy Obama fundraising party he held over the weekend. Aided by the presence of a full bar, party-goers willingly donated $20 to "ride the McCain express" (a wheelchair) around the block and $3 each to throw darts at a life-size cardboard cutout of Sarah Palin. All in all, de Lapp netted $2,200 for Obama and at the end of the night he buckled a strap-on to the Palin effigy, hot glued fireworks to her back and blew her up. All that was left after the inferno was a melted strap-on and a pile of ash.

Alarming violence-toward-women, witch-burning imagery aside, I'm glad we've learned how Palin can fire up the Democratic voter base. ha HA!

Seriously frightening close-up of de Lapp's cardboard Palin as a lipstick-smeared pig below the cut. 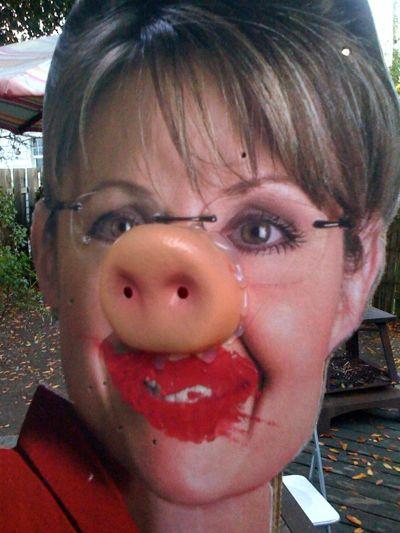