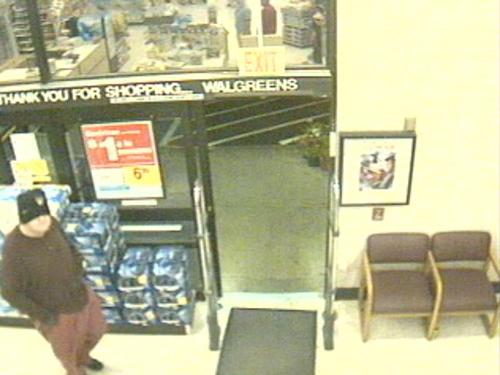 So, this is a bit odd. Onetime drummer for Poison Idea (and Final Warning, among other local punk acts), Steve "Thee Slayer Hippie" Hanford was arrested for allegedly being involved in a series of pharmacy robberies this summer. Police arrested Hanford, following a tip from Crime Stoppers, for allegedly robbing a series of Walgreens' pharmacies at knife point. According to the Oregonian's report "a man with a knife demanded prescription drugs" during the robberies.

The Portland Police Bureau, in cooperation with Crime Stoppers, is asking for your help in finding an armed robbery suspect. On Wednesday, August 20, 2008, at 3:24 a.m. a lone male armed with a knife, entered the Walgreen's pharmacy, located at 940 SE 39th Avenue, demanding opiate drugs. After receiving several hundred Oxycontin pills, the suspect walked out the door onto SE Belmont Street. On Monday, September 8, 2008, at 9:32 p.m. the same suspect entered the Walgreen's located at 3909 SE Holgate Boulevard, armed with a knife and a demand note. The suspect approached an employee and was told that their pharmacy had already closed. The suspect left the store. At approximately, 9:50 p.m., the suspect walked into the Walgreen's at 940 SE 39th Avenue, approached the pharmacy counter, armed with a knife, and demanded prescription drugs. The suspect is described as a white male, late 30's, 6'0" tall, 200 pounds, with gray hair and brown eyes. The suspect walks "hunched" over and appears to be wearing a wig with a long ponytail.

Hansford will appear in court again next Wednesday.