If you had told me a month ago that my next food obsession would be based on corn, I'd have argued with you. Corn's not my thing, I'd have stubbornly said, regaling you with stories of my corn-overloaded past. Sweet corn was the only fresh veggie to grace my Midwestern family's plates in the summer; canned corn stepped in the rest of the year. My great grandparents ran an industrialized corn farm. My first job was at a restaurant, and one of my summertime duties was to shuck dozens of crates of corn. I've had enough corn in my life, thank you very much.

Then I met Dove Vivi's corn-topped pizza. Not only is the crust itself made with crunchy cornmeal (as is all of Dove Vivi's dough), but this deep dish pie in particular is loaded with kernels of fresh, sweet corn—and I can't get enough of it. The first time I visited Dove Vivi, I'm ashamed to say that I snubbed this combo (which marries corn with tangy balsamic roasted red onions, two kinds of mozzarella, and fresh chives). But once I'd tried a few of the other inspired pizzas on their regular menu—like the one with house-made sausage and marinated green peppers, or the baked eggplant and blue cheese with fresh tomatoes—I knew I could trust the talented (and hospitable) crew at this new inner-Northeast joint to put corn on my plate.

Dove Vivi—the name means "where you live," which is exceedingly accurate, given the number of regulars the cozy pizza shop has already wooed, despite its poor signage and nondescript location next to a dry cleaner—builds pizzas that are a hybrid of Chicago's deep-dish crust style, but with Portland's penchant for fresh, seasonal ingredients. The crust is buttery and rich, and the cheeses and toppings are layered right on the crust, with the chunky sauce adorning the top.

But this is Portland, so you'll find seasonal items like broccoli rabe, fennel, kale, leek, and fig pizzas on the rotating specials board, alongside the standbys like pepperoni or four cheese—and, of course, a vegan pie crammed with eggplant, mushrooms, onions, and peppers. (All whole pies are $20, and everything's available by the slice for $3.75. That may seem pricey for a slice of pizza from a 12-inch pie, but these are hearty—two slices make for a solid meal.) It's the same quality ingredients you'll find at Portland's other gourmet pizzerias, like Ken's and Apizza Scholls, but the new-to-Portland crust—and the more casual, homey décor, with mason jars standing in as water pitchers—sets Dove Vivi apart.

Pizza's not the only thing on the simple menu. Salads are generously sized, though the vinaigrette dressing on the mixed greens or beet salad could use more vinegar to balance out the fruity olive oil. There's a lone dessert on the menu, but it's strong enough to stand on its own (and feed two)—creamy and airy chocolate mouse is layered with crushed biscotti, and enveloped in a ladyfinger crust.

Also on the menu are roasted chicken and calzones. I haven't tried those yet, but if the quality of the pizzas are any indication, they'll be knockouts. I'm just not ready to end my newfound love affair with corn pizza.

This Week in Portland Event News: Florence + The Machine, ODESZA, and More 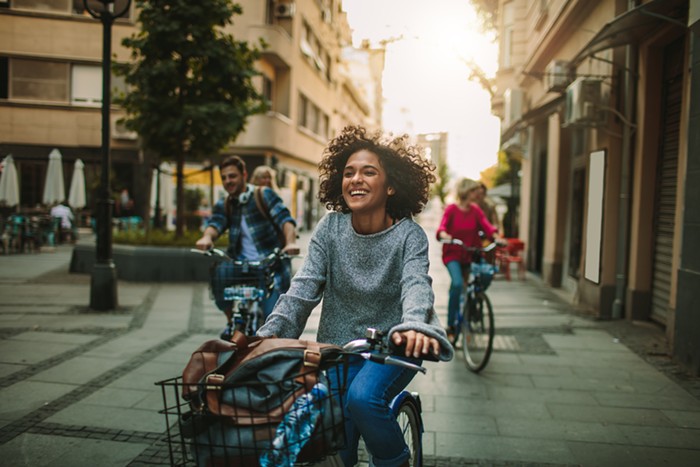