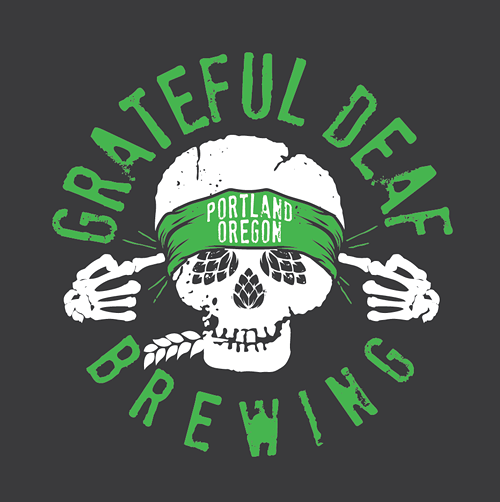 Fred Eckhardt, the local beer writer/national beer treasure who passed away last year, was fond of saying, “Listen to your beer.” What he meant by that was that beer can and should be enjoyed not just by taste, but by all your senses.

Deaf though Fisher may be—and has been since birth (though with partial hearing in his right ear hence why you can understand him when he speaks)—he’s no less a beer vivant. Fisher, 63, took up homebrewing in 1988, and he cops, “My first batch... a brown ale fermented in the closet... got thrown out. Skunked.” Prior to becoming a hophead, though, he was a Deadhead. That’s the long story short behind his new venture, Grateful Deaf Beer.

For years, Fisher had been something of a gypsy brewer—the name applied to people who don’t have their own commercial brewing facility but make beer wherever the wind takes them. He’s brewed across the Netherlands, Italy, and England as well as the Western US, including Oregon breweries such as Deschutes, Rogue, Fort George, and, for cask ale lovers, Brewers Union Local 180 in Oakridge. Fisher is a cask ale lover.

But one thing Grateful Deaf has never been is a commercial enterprise. Enter Brian Bearden. In Bearden’s words, “Ken was making somebody money making beer, just not himself.” Bearden is a deaf entrepreneur. He’s been deaf since the age of three and was bit by the entrepreneurial bug back in college—he successfully pitched a show to MTV about deaf spring break—while attending Gallaudet University for the deaf and hard-of-hearing in Washington, DC.

(Fun fact: Gallaudet’s football team, for which Bearden played, invented the modern-day huddle. Their QB realized that his teammates weren't the only ones reading his sign language. The players on other deaf teams could as well, so Gallaudet gathered in a huddle to prevent opponents from literally their reading plays.)

Fisher and Bearden make for great drinking buddies. Bearden has a Cochlear implant whereas Fisher, in addition to always wearing tie-dye, wears a hearing aid, so he needs to be able to read lips, too. For Bearden’s part, one thing he loves about being in the beer business is drinking at bars. He says bartenders will ask, “Are you drunk or deaf?” That tends to lead to a keg sale!

Among Bearden’s other companies in “the deaf space” is DeafVibe, a nonprofit that helps deaf kids go to college. He says his goal for Grateful Deaf is to hire at least 60 percent deaf employees. The company’s first release is Fisher’s most popular creation, his rye IPA. The name is Read My Lips IPA (6.8 percent ABV, 100 IBU). Bearden says he wants the next one to be Deaf and Dumb Blonde. I can’t help myself from spitballing names.

Helen Kellerweiss. Hearing Impai Red Ale. Beethoven And Bock. I also tell Bearden that Read My Lips for a RyePA is better than Rye’d My Lips for obvious reasons.

Another obvious name is Braille Ale, but Bearden already has designs to put braille on every bottle (once they start bottling).

For now, Grateful Deaf Rye IPA is about to be tapped at two Portland bars on Saturday: The Rambler in the Boise neighborhood (4205 N Mississippi) and the Leaky Roof in Goose Hollow (1538 SW Jefferson). The Rambler's executive chef Russell Jorgensen, Bearden tells me, is a CODA. That’s the term in the deaf community for child of deaf adult. Expect the Rambler to be wall-to-wall hearing aids since, as Bearden puts it, “We can flood a whole establishment with deaf people.” There are reportedly 28 million deaf people across the country (half of which are seniors who have gradually lost their hearing). Bearden speculates there are about 30,000 in Portland’s deaf community. Between them and the non-hearing-impaired hopheads, the kegs—initially brewed at Seven Brides Brewing in Silverton under license of Awesome Ales of Portland—should kick quickly.

Tags: Beer Blogs
If you enjoy articles like this, please help the Mercury continue our mission of providing up-to-the-minute information, progressive journalism, and fun things to do in Portland by making a small recurring monthly contribution. Never forget: Your help is essential and very much appreciated!
CONTRIBUTE NOW