The Proud Boys Came to Portland and Are Threatening to Return. Now What? 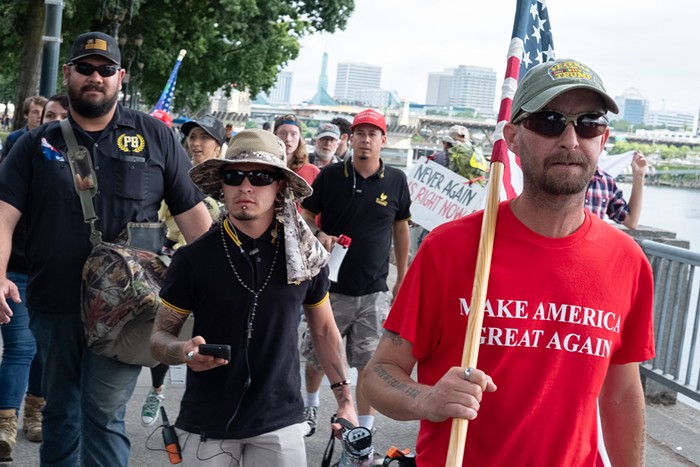 In the hours following the highly-anticipated protest, Portland leaders, law enforcement, and the public let out a collective sigh of relief.

But the conflict that’s made Portland a playing field for bigoted extremists isn’t over.

Those behind the initial protest—the Proud Boys, a national far-right organization with white supremacist ties—have threatened to return to Portland unless the city takes an authoritarian stand against its liberal residents. The city's growing community that identifies as anti-fascists, meanwhile, are calling on law enforcement to do more to protect Portlanders from alt-right interlopers. Some are taking legal steps to make that happen.

As the dust settles from Saturday’s expansive demonstrations, Portlanders want to know: Now what?

Around 200 Proud Boys descended on Portland Saturday to decry protesters who identify as anti-fascist—colloquially called “antifa.” Joe Biggs, the Florida-based Proud Boy who arranged the protest, seems to believe that antifa has turned Portland into a lawless, progressive “anarcho state,” and calls them “domestic terrorists.”

Saturday’s counter-protest was orchestrated by an activist group called Popular Mobilization, or PopMob. PopMob encouraged participants to dress in colorful costumes, play instruments, and generally emulate what it means to “keep Portland weird” to counter the Proud Boys’ hateful rhetoric.

The Proud Boys briefly met at Tom McCall Waterfront Park around 11 am, encircled by hundreds of armored law enforcement officers. On the other side of the police line, nearly one thousand counter-protesters—some dressed in silly costumes, others in all black—gathered to condemn the presence of an identified hate group in their city.

“Instead of hiding in fear alone in our homes, we chose a joyful display of community resilience — a reminder of the power we have when we come together,” wrote PopMob spokesperson Effie Baum in a Sunday press release.

After a half hour, the Portland Police Bureau (PPB) allowed the Proud Boys to march over the Hawthorne Bridge to the east side of the Willamette River, where many had parked their vehicles. Until that point, PPB had closed the bridge to any vehicle or pedestrian traffic. According to PPB, this decision was made to keep counter-protesters safe and expedite the Proud Boys’ departure.

But for anyone who watched the swarm of men—wearing “Make America Great Again” hats and shirts advocating for violence against LGBTQ+ people and Muslims—cheering as they took the Hawthorne Bridge completely unopposed, PPB’s decision felt more like an endorsement.

Most of the Proud Boys retreated to Vancouver after posing for a group photo on the Eastbank Esplanade. But some of the group’s far-right allies remained near the city center. Many of them appeared to seek out confrontation and fist fights with members of the public, regardless of whether or not they were part of the counter-protest.

In PopMob’s press release, Baum condemned the PPB for “jeopardizing the safety of our city” by granting the Proud Boys access to the Hawthorne Bridge.

“It is outrageous that the Portland Police Bureau bends over backwards to accommodate violent, out of town extremists like the Proud Boys again and again, while leaving Portlanders vulnerable to attack,” Baum said.

By 3 pm, the Proud Boys had claimed victory in a press release.

“The gathering was never about bringing carnage or violence to the City of Portland, it was about financially crippling the progressive hotbed until they take action against antifa,” read the release, which was emailed to elected city officials and reporters. Since the city claimed to have spent millions on preparing for and staffing the protest, the Proud Boys said, the visit was a success.

And then, a threat: According the press release, the Proud Boys will return to march in Portland every month until Mayor Ted Wheeler “removes” anti-fascists from the city.

“The path forward for Mayor Wheeler is simple, free your city from the grip of antifa, take direct and meaningful action,” said Biggs in the press release. “Otherwise, the citizens will grow weary of you wasting tax dollars and the time of first-responders with your ridiculous political posturing.”

In a press conference later in the evening, Wheeler further confirmed the Proud Boys’ financial impact.

“These kinds of demonstrations cost millions of dollars,” Wheeler said. “They are misusing public taxpayer resources, and I hope they think about that.”

In total, Wheeler estimated the protest cost the city $2 million.

It’s not just public funds that were hurt by the Proud Boys’ visit. According to the Portland Business Alliance, downtown businesses have estimated the protest cost them nearly $3 million in lost revenue.

On Monday, the Mercury asked Wheeler’s office how the city will keep the Proud Boys from draining city funds in the future. In a statement emailed to the Mercury, Wheeler said: “I have one clear message to anyone who says they’re going to continue wasting the city’s resources over and over again: Stop wasting our time. Stop wasting taxpayer dollars. Stop hurting our businesses. We have a city to run and lives to lead.”

It’s still unclear if the city will take further action to keep the Proud Boys at bay.

PopMob has pledged that, if the Proud Boys return next month, they will be greeted by an even larger group of anti-fascists.

“If [Saturday] showed us anything, it’s that when we come together as a strong, united community, we can hold down our public space and keep it safe from fascists,” PopMob’s Baum said. “The state does not protect us, we protect us.”

Attorney Juan Chavez, however, is hoping to use the state’s tools to shield Portland from these future visits.

Chavez, who works for the Oregon Justice Resource Center (OJRC), filed a lawsuit against the Proud Boys’ Biggs and other members of the far-right group on August 17 on behalf of Luis Marquez, a member of Portland’s anti-facist community. According to the lawsuit, Marquez received multiple death threats from people associated with the Proud Boys leading up to the August 17 protest. Marquez’s lawsuit accuses the group of defamation, false light, intentional infliction of emotional distress, and negligence.

Chavez is intending on filing a preliminary injunction this week, which would request a judge bar members of the Proud Boys from convening in Portland with any type of weapon with the intention to inflict violence.

“The Proud Boys are organizing in a manner to commit violence, which is not protected speech. We have laws on unlawful behavior,” Chavez told the Mercury. “We’re simply restricting defendants from organizing a lynch mob.”

But, Chavez noted, he’s not the only one who can use the courts to keep right-wing extremists out of Portland.

“Mr. Marquez is just one person in this town,” says Chavez. “Meanwhile, we have a city government that could also seek an injunction with damages... Will they take action?"

With the threat of ongoing visits from a hate group intent on wasting the city's dollars, the public's waiting for an answer.