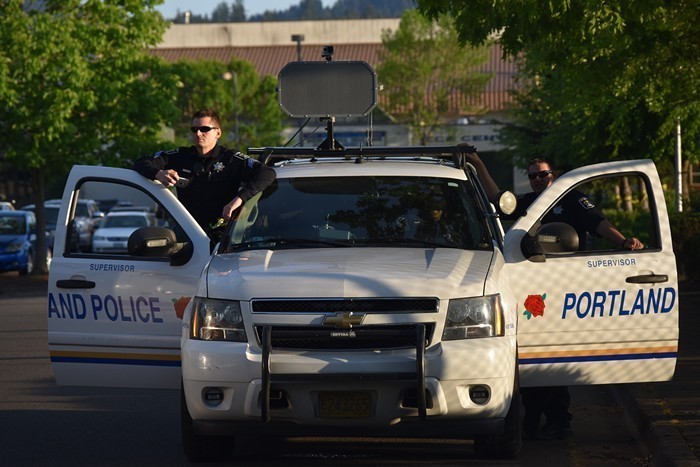 DOUG BROWN
It's official: The Department of Justice has announced that the City of Portland has met all of the 190 requirements of a legal agreement made six years ago over Portland police officers' mistreatment of people with mental illnesses.
Sponsored

"This accomplishment represents the city taking specific, concrete steps to address community concerns about use of force training, management, and accountability," said Mayor Ted Wheeler at an afternoon press conference. Wheeler said the city had just received a letter from the DOJ signaling this compliance.

The DOJ was first drawn to Portland in 2011, after the city witnessed an unprecedented and sustained increase in the number of mentally ill Portlanders dying at the hands of the the police. After conducting an investigation into the Portland Police Bureau (PPB) related to these deaths, the DOJ concluded that the city had violated the constitution by allowing its officers to engage in "a pattern or practice of using excessive force" against people who had (or were perceived to have) some kind of mental illness. The DOJ sued the City of Portland over these claims in September 2012.

It took the city two more years to hammer out a settlement agreement with the feds, one that required the city to create a walk-in emergency mental health medical center, form a Behavioral Health Unit within the PPB, accelerate the process of investigating officer misconduct complaints, expand mental health training for cops, and allow quarterly use-of-force audits within the PPB, among other things.

Every year, the City of Portland has stood before US District Judge Michael H. Simon to deliver a mandatory update on these reforms, slowing checking off boxes. At the latest check-in, which took place in June 2019, Simon said the city had met all but one of the lingering requirements: Forming a successful community-led group that oversaw the city's reforms.

While that group, called the Portland Committee on Community Engaged Policing (PCCEP), had been meeting monthly since November 2018, Simon was hesitant to deem the program a success—especially since he'd watched PCCEP's predecessor unravel a few years earlier.

With its letter of approval, the DOJ has confirmed that PCCEP has provided legitimate community oversight, and deemed Portland's years of federally-tailored police reform a success. The city must remain in compliance with the settlement agreement for one year, however, before the process formally comes to an end. The next court check-in with Judge Simon will be on February 25.

PPB's reforms are viewed a bit differently outside the federal justice system.

At PCCEP's October meeting, where the group discussed the fed's looming stamp of approval, committee members and other attendees struggled to see improvements.

“Forty percent of people killed by police in the last year were having a mental health crisis,” said Elliott Young, a member PCCEP. “How is that compliance?”

The numbers make it hard for some to see how PPB's improved. In 2019, Portland saw the highest number of fatal shootings of people in a mental health crisis since 2010, the year that inspired the DOJ investigation.

“The settlement agreement addresses outputs... but until we know what their outcomes are, how are we even able to assess what’s being done?" asked Lakayana Drury, PCCEP co-chair. "Yeah, there’s new police training, but is it leading to officers using less force?”

PCCEP plans to discuss the DOJ's latest findings at its January 28 meeting.

At today's press conference, Wheeler said that while the DOJ announcement was a "major milestone," the city's work to help people with a mental illness wasn't over.

"We need to collectively provide more services and more support to people experiencing mental illness and we need to continue to explore ways to reduce uses of force," said Wheeler," including deadly force."

"A common misconception is that compliance with the settlement agreement will result in zero officer-involved shootings," said Resch. "Being in compliance means that we have done everything to minimize using force on those experiencing mental illness. We will continue to seek ways to minimize the use of deadly force, particularly against those with mental illness."