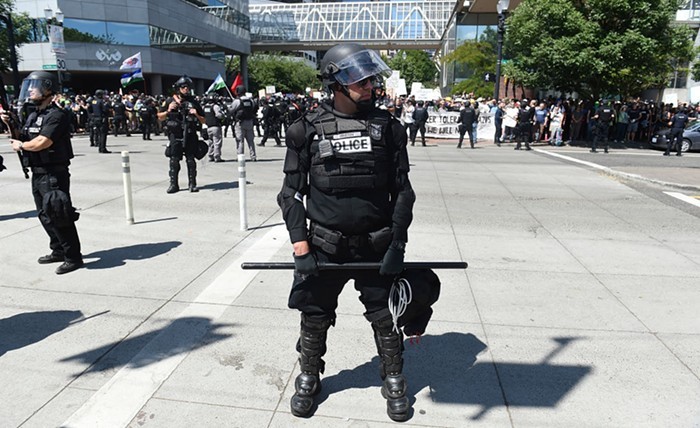 STEVE DYKES/GETTY IMAGES
On August 17, 2019, hundreds of Portlanders took to the streets to protest a rally organized by the Proud Boys, a national right-wing extremist group with white supremacy ties. The idea of the central counter-protest, hosted by activist group Popular Mobilization, was to use silly costumes, dancing, and music to detract from the Proud Boys' event.

Alonna Mitsch, a 26-year-old African American woman, attended the event dressed in a shirt and hat reading "Black Lives Matter." Around 3 pm, she was crossing SW Oak near SW 3rd in downtown Portland when NWA's song "Fuck the Police" came on over a protester's loudspeaker. She paused in the bike lane to briefly dance to the music—or, to be specific, twerked.

That's when several armored police officers tackled her to the ground and arrested her. Mitsch was charged with disorderly conduct for obstructing vehicular traffic.

"It literally blew my mind," Mitsch recalled in a Monday interview with the Mercury. "I was like, 'There's Nazis walking through our city, but I’m shaking my behind in the middle of the street and that’s what you’re worried about?' That can't be right."

A Multnomah County jury confirmed her skepticism last week, when it found Mitsch not guilty and dismissed her misdemeanor charge.

For Mitsch and her attorneys, this didn't come as a surprise. It was the fact Multnomah County District Attorney's (MCDA) office pushed the small charge all the way to a jury trial, however, that did strike them as unusual.

District attorneys have the ability to dismiss low-level charges after an arrest. In Portland, it's not uncommon for this to happen after county prosecutors review arrests made during a protest. But that wasn't the case for several August 17 arrests.

Mitsch is one of several Portlanders arrested that afternoon for a low-level misdemeanor whose case wasn't dismissed by MCDA. The district attorney's office is still pushing disorderly conduct charges against Teagan Winkler, a woman who revved the engine of her parked motorcycle to drown out the shouts of the Proud Boys, and Hannah Ahern, a woman who spit on the pavement a few feet from a cluster of cops while she was crossing the street. On February 13, the three women sent a joint letter to the Multnomah County Circuit Court, requesting that their cases be dismissed.

“We’re asking the court to consider what really serves the public interest,” said Maya Rinta, an attorney representing Mitsch who was quoted in the letter. “We believe that the importance of protecting the right to free speech and assembly greatly outweighs the dubious need to clamp down on unauthorized dancing in the street.”

In the letter, the women warned that they're "planning to pursue civil claims against the City of Portland and the police officers involved."

Mitsch believes it was this threat of a lawsuit that encouraged the MCDA's office to continue pursuing her case. (If the MCDA had dismissed the charges, it could be seen as an admittance of guilt and used against the city in a future lawsuit).

"It was clear to me that the DA just wanted to protect its cops," said Mitsch. "But the jury knew better."

Discovering that taxpayer dollars go towards fighting cases like hers came as a disappointment to Mitsch, who'd never faced criminal charges before.

"I don't think the public would agree that this is the best way to be spending our tax dollars," she said. Her legal team agrees.

“I think the district attorney’s office charges these cases as a way to protect police officers from lawsuits for excessive force, and not because these cases raise public safety concerns to the people of Portland," said Viktoria Safarian, another attorney representing Mitsch.

As tense protests between right-wing and progressive, anti-fascist activists have become increasingly routine in Portland, many have accused Portland police of showing bias against left-wing demonstrators—a perception supported by disproportionate use-of-force against anti-fascist activists and text message records showing a friendly, supportive relationship between right-wing organizations and Portland police officers. In court documents, Mitsch's lawyers pointed to a similar imbalance that took place during their client's arrest.

"Notably," they write in a January 10 request to dismiss Mitsch's case, "while Portland Police arrested Ms. Mitsch as she protested against the Proud Boys, white supremacy, and fascism, the police escorted the Proud Boys and their associates across the Hawthorne Bridge to the exclusion of the counter-protestors."

Mitsch said her acquittal has given her hope, since it shows that members of the public support Portlanders' right to protest and won't blindly side with officers. She's uncertain if she'll still pursue a lawsuit against the City of Portland.

The saga hasn't deterred her from participating in protests in the future.

"At the end of the day, we still have fascists come to Portland, so my work is not done," she said. "I’m a Black woman; my daughter is a Black woman. It's my responsibility to keep fighting."