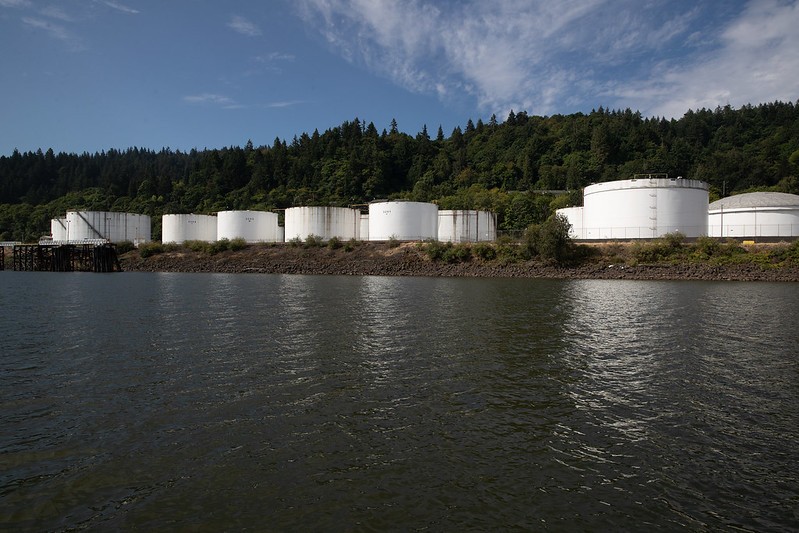 Eager to see progress on Portland’s climate goals, environmental advocates are urging Portland’s Charter Review Commission to propose a charter amendment that would oppose the expansion of fossil fuel infrastructure in the city. Advocates believe the ongoing charter review process is an opportunity to strengthen Portland’s commitment to reducing its carbon footprint and advance its climate goals.

“This is not a radical shift, and it's not banning all fossil fuel use tomorrow, but rather something that we've been calling for as scientists and activists for quite a long time,” said Ben Stevenson, a member of environmental group Sunrise PDX . “If we’re going to address climate change, this is something we need to have.”

Every 10 years, a group of 20 volunteers selected by Portland City Council members are tasked with reviewing the city charter and suggesting amendments. The latest charter commission, which convened in 2020, is halfway through its current review—its first proposed package of charter amendments to alter the city’s form of government passed in last week’s general election.

The charter commission is now in the second phase of the process, reviewing the charter with a new focus on environmental justice, voting rights, and amendments proposed by city bureaus. The commission has until early December to decide what proposed charter amendments, if any, should go before voters in the May or November 2024 election. A majority of the commission can also vote to recommend the proposed amendments to city council, which would then determine what amendments should go to voters during an election of their choosing.

Environmental advocates see this second phase of work as an opportunity to advance Portland’s climate goals by editing the charter to mandate the city to restrict the expansion of fossil fuel infrastructure and actively phase out the use of fossil fuels overall. Portland has committed to reducing its emissions by 50 percent below 1990 levels by 2030 and reaching net-zero carbon emissions by 2050. The city must make significant and dramatic changes in the next eight years to achieve those goals.

Earlier this year, Portland officials banned new fossil fuel infrastructure in the city for the third time after previous attempts were challenged in court by the fossil fuel industry and the Portland Business Alliance for six years. While courts sided in the city’s favor, they also determined the city needed to provide additional evidence to prove it had the authority to block the expansion of fossil fuels based on existing city code. A similar legal determination was made in the city's favor when oil transporter Zenith Energy challenged Portland’s denial of a land use permit in 2021; that case ended with a compromise allowing Zenith to continue operating as long as they switch to transporting renewable fuels in the next five years.

Specific language restricting fossil fuels in Portland’s charter could be what the city needs to defend its attempts to limit the city’s emissions and reduce the region’s reliance on fossil fuels.

The charter commission is currently proposing an amendment that will require the city to “actively manage the decline of fossil fuel use within its boundaries, consistent with environmental justice, public health, seismic resiliency, and the best available science,” along with a commitment to add environmental justice as a “core city value” (Read the full amendment text here, under Proposal #12).

Climate advocates are pushing for a stronger amendment that would require the city to “prevent expansion of fossil fuel infrastructure” and “actively undertake the decline to net zero” fossil fuel usage in the city. The proposed amendment language would also explicitly permit infrastructure that would help the city transition to 100 percent renewable electricity.

Stevenson with Sunrise PDX said that this language is pulled from previous or existing ordinances and city policies. By baking Portland’s existing climate efforts and values into the city charter, the city could have a stronger foundation to fight legal challengers and a binding commitment to act on climate change, Stevenson argued.

“This is not a new idea,” Stevenson said. “Having something that prevents [the expansion of] fossil fuel infrastructure and phasing out fossil fuels in the charter would coalesce to have a binding commitment that would lead to some stronger action.”

According to Indi Namkoong of environmental group 350PDX, a lot of city and climate activist energy in Portland goes toward preventing the city from “backsliding.” For example, several environmental organizations are calling for the city to rescind its deal with Zenith that allows the oil transporter to continue operating in the city as long as it switches to renewable fuels within five years, arguing that the oil transporter cannot be trusted to operate in Portland due to a history of misleading city officials about its operations. Activists have called for the city to put more of its budget toward climate change mitigation efforts in alignment with its stated goals—Mayor Ted Wheeler dedicated $2.4 million to explicit climate change mitigation efforts in the most recent budget cycle, less than one percent of the total budget.

“We don't want [the city] to have to keep going back to the drawing board,” Namkoong said. “This is an opportunity to make sure the work isn’t subverted the second that it passes through [city council] and align the city government’s efforts with the community and scientists.”

“The low hanging fruit is gone,” Oliveira told city council in August. “The next policy decisions and initiatives we take as a city are not going to be easy.”

BPS and Oliveira have indicated general support for committing the city to reducing its reliance on fossil fuels through a charter amendment.

“We are supportive of any effort to reduce dependence on fossil fuels,” BPS spokesperson Magan Reed told the Mercury.

During an October meeting on climate related charter amendments, the charter review commission members said that while they are currently moving forward with amendment language that does not restrict the expansion of fossil fuel infrastructure, they want to hear community feedback on whether stricter language should be used in the amendment. The charter commission is holding public input sessions on November 17 and November 19 to solicit feedback on all of the 14 proposed charter amendments.