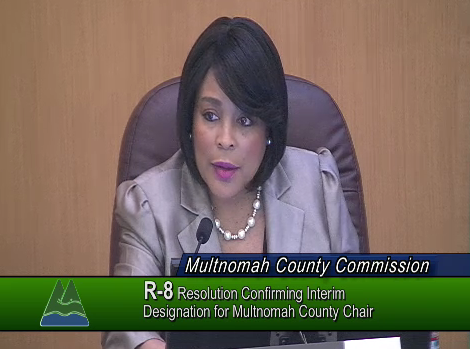 
The tension began over a relatively routine matter: Kafoury was asking the commission to enshrine someone to serve in her stead in case she leaves office unexpectedly or is otherwise unable to serve. Kafoury's last alternate, former County Chair Bev Stein, recently moved out of the county. Her new pick for alternate? County Chief Operating Officer Marissa Madrigal.

Madrigal would seem to be a sensible choice. She served as alternate (and chief of staff) to former County Chair Jeff Cogen, and so served as chair when Cogen left office under a cloud in 2013. She also knows the ins and outs of the county.

But the appointment didn't sit right with County Commissioner Loretta Smith. In an exchange that brought out long-simmering tensions on the county board, Smith said she was wary of Madrigal being explicitly aligned with Kafoury.

"My concern is: Will she be able to be impartial?" said Smith, who's repeatedly clashed with Kafoury. "The transparency issue assumes that she is always going to be aligned with you, and that’s my concern."

"What happens when the institutional racism is coming from the chair’s office?" Smith said. "Aligning the top two people in this organization.. the COO and CEO, there is lots of room for institutional and infrastructural racism."

County Commissioner Jessica Vega Pederson tried to point out that Kafoury already has the power to fire Madrigal at any time, and so Madrigal would presumably try to stay in her good graces anyway. Smith paid no heed.

As back-and-forth continued, Kafoury abruptly gaveled the meeting to a close before a vote could occur, and the video of the hearing ends directly afterward. But both Smith's county and campaign staffs (she's running for Portland City Council) say more occurred.

"Instead of allowing my concerns to be heard and my questions answered the Chair interrupted and spoke over me several times," Smith said in a statement issued this afternoon. "After she gavelled out, over my objections, she took this overtly hostile behavior to another level. Calling me a 'bitch' in the public sphere is unbecoming of the office she holds. This term is offensive not only because it was uttered in Council Chamber, but also because it is racially charged."

We've reached out to the county for a response from Kafoury. The interaction (sans any salty language) begins around the 1-hour 27-minute mark.

Update, 4:07 pm: Kafoury has released a statement on the incident, apologizing for "a regrettable comment," but saying she "felt the responsibility to defend the County's staff." Here's the statement:

Today, Commissioner Loretta Smith attacked the ethics and integrity of the COO of Multnomah County, who was also the former Chair of this Board. I have watched Commissioner Smith attack staff across Multnomah County, and today, I was deeply offended by her egregious accusations which led to a regrettable comment. For that, I sincerely apologize. It was unprofessional and unbecoming for me to express my feelings in the way and manner I did. At that moment, faced with her behavior, I felt the responsibility to defend the County’s staff.

Comments 12
Tags: News
If you enjoy articles like this, please help the Mercury continue our mission of providing up-to-the-minute information, progressive journalism, and fun things to do in Portland by making a small recurring monthly contribution. Never forget: Your help is essential and very much appreciated!
CONTRIBUTE NOW