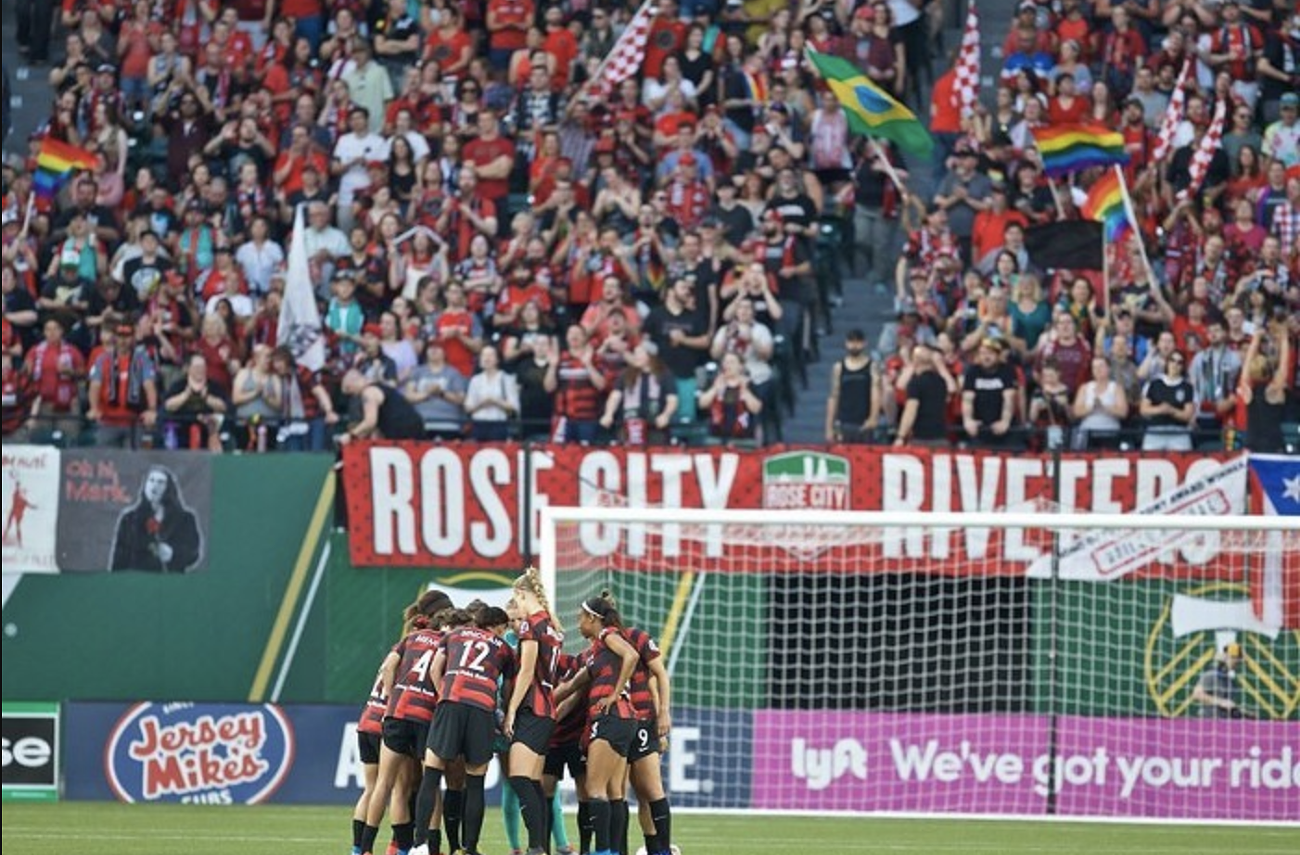 When Tina Ettlin, a member of the Rose City Riveters steering committee, began reading the report on US Soccer’s independent investigation of abuse in the National Women's Soccer League (NWSL) on Monday, she was horrified.

“It was devastating,” Ettlin, who is a survivor of sexual assault, said. “I had to take a good chunk of the day to step away.”

Ettlin and fellow members of the Rose City Riveters, the Timbers Army, and the two groups’ umbrella organization the 107 Independent Supporters Trust (107IST), spent Monday evening in conversation about how to respond to the investigation’s findings. The statement they ultimately crafted, released just after midnight, was unequivocal.

“The time for waiting has passed,” the statement reads. “The toxic culture that allowed these behaviors to exist and continue in our clubs’ organizations runs too long, too deep, and too high. [President of Business] Mike Golub and Gavin Wilkinson have no place in the Timbers and Thorns organization, or in Soccer City, USA; and Merritt Paulson and Peregrine Sports need to sell the teams.”

The statement, in which the groups also announced they are “suspending relations” with the front office while Paulson, Wilkinson, and Golub remain with the club, comes after months of the 107IST meeting with representatives from the club’s front office in an attempt to move forward cooperatively.

The group did not sever communications after The Athletic published a story on Riley’s alleged abuse of former Thorns midfielders Mana Shim and Sinead Farrelly in September of 2021, even after the club’s management abruptly stopped meeting with them in the resulting fallout. The 107IST board then agreed to resume meeting with the front office this year even after subsequent reporting revealed more and more about the club’s poor treatment of women.

The group maintained its relatively conciliatory position even as a survey conducted in September found that nearly 81 percent of respondents wanted the organization to push harder than it had been pushing for accountability and change.

The board’s leaders, at that point, were still willing to give Paulson the benefit of the doubt. At a September 19 meeting, Paulson reportedly told 107IST board members that the club could begin to speak more openly about its handling of Riley and repair its relationship with supporters following the release of the US Soccer report—all while he knew that the club had been impeding the progress of that investigation by attempting to deny investigators access to critical documents and witnesses.

It seems that Paulson either somehow believed that the report released on Monday would paint him and his organization in a relatively positive light or was simply misleading the board in an attempt to buy himself and his top two executives time before more of the truth came to light.

“As a leadership group, we were lied to,” the 107IST statement read. “Although we remained cautiously optimistic at each meeting and in each interaction with [Portland Thorns/Timbers FC] leadership, reading the report highlighted the multiple bold-faced lies we were told, both in meetings and in town halls.”

This deception and dishonesty from the front office appears to date back to last October and the immediate aftermath of the publication of The Athletic article.

In an open letter to supporters written days after the publication of the article, Paulson promised that the club would “fully cooperate with the related investigations by FIFA, US Soccer and the U.S. Center for SafeSport.” That did not happen. Instead, investigators wrote that the Thorns “interfered with our access to relevant witnesses and raised specious legal arguments in an attempt to impede our use of relevant documents.”

Ettlin said that the dishonesty extended to the 107IST’s private meetings with the club as well. She said that the front office led 107IST members to believe, for instance, that Shim’s 2015 complaint was the first time that the club’s top officials had been made aware of any alleged misconduct by Riley—but the report released Monday found that Paulson first learned of abuse allegations against Riley made by U.S. national team players the year before and took no action.

After leaving Portland, Riley was hired to manage the Western New York Flash. Ettlin said that 107IST members were told that, when Wilkinson was asked by Flash officials about Riley’s tenure in Portland, he was advised by counsel to limit his comments to the manager’s on-field performance. But the investigation found that Wilkinson allegedly told Flash executive Aaran Lines that “Paul ‘was put in a bad position by the player’” in regards to Shim’s complaint.

Now, in a statement released on Tuesday, Paulson is promising that the club is fully cooperating with a separate joint investigation by the NWSL and the NWSL Players Association (NWSLPA). Ettlin said that it’s unclear why anyone would believe him.

“He’s completely broken our trust,” she said. “That’s where it got to that breaking point with us in the statement we put out—there’s too many instances of him lying directly to us and then having the facts come out and say otherwise.”

While the 107IST and the club’s front office have clashed bitterly in the past, including during a battle over supporters’ right to display anti-fascist imagery at Providence Park in 2019, the severing of ties is an unprecedented step with a yet unclear set of consequences.

The club has profited immensely from the supporters’ groups passion, which has raised the national profile of both the Thorns and Timbers, while the supporters have been able to keep seating in the stadium’s north end general admission and create their desired matchday atmosphere.

The Timbers’ season is currently hanging in the balance—they must win or draw next weekend to qualify for the playoffs and might not play another home game in 2022—but the Thorns are preparing to host a playoff match at Providence Park on October 23.

How the 107IST and Rose City Riveters will approach that match remains, for now, an open question. Ettlin said that members of the group’s gameday operations committee will meet in the coming days to consider how best to balance their desire to support the club’s players with the need to protest its leaders.

The notion that Paulson might be forced to sell is perhaps, given his wealth and connections in both the NWSL and MLS, a longshot. But the Major League Soccer (MLS) constitution allows the league to terminate an ownership agreement if two thirds of owners on the league’s board agree that “an operator/investor is determined to have failed to act in the best interests of the league.”

Two years ago, The Athletic and Salt Lake Tribune reported that Real Salt Lake and Real Monarchs owner Dell Loy Hansen had a history of making racist statements. MLS and the NWSL launched investigations; Hansen announced just days later that he would sell both teams.

That kind of pressure and result is what the supporters groups and plenty of others—including Thorns and US national team defender Becky Sauerbrunn—want Paulson subjected to.

“It’s my opinion that every owner and executive and U.S. Soccer official who has repeatedly failed the players and failed to protect the players, who have hidden behind legalities and have not participated in these investigations, should be gone," Sauerbrunn told reporters Tuesday.

Paulson, meanwhile, appears intent on trying to hang on. His Tuesday statement called the release of the report on the US Soccer investigation “the darkest day I have experienced” and said that he was temporarily removing himself, Wilkinson, and Golub from “all Thorns-related decision making” until the results of the NWSL/NWSLPA investigation are released.

All three men will remain involved in running the Timbers and could conceivably return to their roles with the Thorns as soon as next month.

For Sofia Freja, an activist with the group Soccer City Accountability Now and member of the Riveters and Timbers Army, it’s not nearly enough.

“We all want these men out of our club,” she said. “This club was here before them, and it will be here—we will be here—after them. The sooner we can move on from them, the better for everyone.”