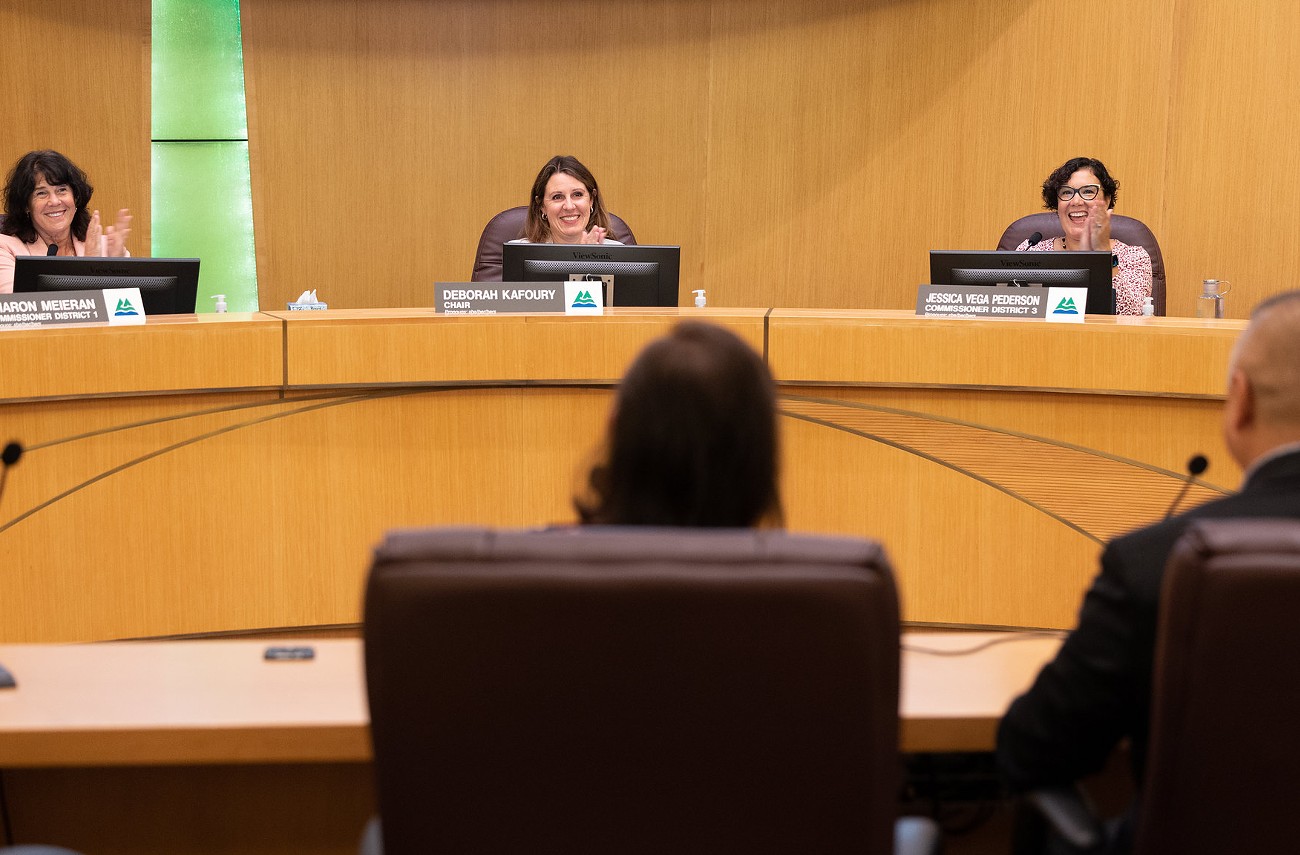 The Multnomah County Commission voted unanimously Thursday to direct $28 million in excess funds toward an array of rental assistance programs, dodging a request from Mayor Ted Wheeler’s office to spend some of those dollars on the city’s mass homeless encampment plan.

Due to an unpredicted influx in revenue collected through the regional homeless services tax in the past fiscal year, the county has more than $28 million in one-time funds available to spend on programs that address homelessness.The Joint Office of Homeless Services (JOHS) sent a proposal to the county board of commissioners recommending that the majority of those dollars go toward rent assistance for people at risk or currently experiencing homelessness.

Specifically, JOHS proposed that $15 million of the funds close a gap in rental assistance dollars that could prevent 3,400 households from eviction by the end of the fiscal year in June 2023. The agency also recommended $1 million of that funding go toward financial assistance—ranging from move-in costs to security deposits—to help get more than 300 people into permanent supportive housing and $120,000 to cover emergency housing vouchers for some 87 households.

JOHS and the county's budget office recommend that the remaining $12 million in excess revenue be placed in a contingency fund to fill future gaps in homeless services. Those dollars can only be accessed through a future county commission vote.

Wheeler’s office has asked the county to put $21 million of those excess funds toward a controversial city proposal to open three large outdoor encampments and force unsheltered people into them. He underscored this demand at a meeting with local business owners on December 8.

"If the commission approves the spending without any funds [for the encampments],” Wheeler told the group, “they are no longer a partner of ours."

Last week, Wheeler’s office urged County Chair Deborah Kafoury to delay the commission’s vote until 2023, when Kafoury will no longer be in office. Several members of the public echoed his request at the Thursday county board meeting.

“I’m asking you, outgoing Chair Kafoury… to give up a little bit of power,” said a woman named Brittany Andrus. “Allow the incoming chair and commission to reassess the JOHS budget in light of the city of Portland's recent request.”

On January 1, current County Commissioner Jessica Vega Pederson will be sworn in as the newest chair, with her seat being temporarily filled by former state senator Diane Rosenbaum. Yet Vega Pederson said she was in direct alignment with the county’s investment Thursday, suggesting that a delay wouldn’t have changed the vote’s outcome.

“I want to clearly state I am strongly supportive of the investments we’re making today with these dollars,” said Vega Pederson, before voting to approve the funding package. “I am glad we are meeting the critical needs of this moment.”

Vega Pederson added that the “collaboration, graciousness and commitment” of Kafoury is something she admires and hopes to emulate as chair in the new year.

Commissioner Sharon Meieran was the sole commissioner who mentioned the benefits of delaying the vote, yet ultimately voted to pass the funding package.

Several commissioners directly addressed the way in which Wheeler and others at Portland City Hall have pushed forward the encampment plan.

“I am deeply disappointed by the misinformation, ultimatums, and threats that have been coming from some of the leadership within the city of Portland,” said Commissioner Lori Stegmann. “In my experience, this approach has never served as a solid foundation for a healthy partnership. I want to offer the city of Portland an olive branch in the hope we can reset this relationship. It does not mean we are going to agree all the time. It does mean that we treat one another with respect, dignity, and kindness.”

Stegmann also pointed out her disappointment with Portland City Council’s recent decision to withhold $8 million in funding previously promised to JOHS that will instead be used to build the homeless encampments. That unexpected cut to the JOHS budget has forced the development of a county-run women’s homeless shelter to be placed on hold, said Stegmann.

Thursday's vote at the county commission kept the city from making additional cuts to JOHS' budget. In November, Portland City Council passed a budget amendment that promised to withhold $7 million promised to JOHS if the county didn't commit $15 million to rental assistance—which Thursday's budget vote does.

“Partnership is essential,” said Jayapal. “But partnership requires working collaboratively to construct a plan, not a five minute phone call to announce a plan that has been created. And partnership is most definitely not threats and ultimatums. That’s the kind of partnership and leadership our constituents expect and deserve.”

Both commissioners and the public underscored the need to use the excess finding to slow the alarming rate of evictions in Multnomah County. In 2019, Multnomah County courts saw an average of 500 eviction cases a month. In October, that number soared to 820. And, according to data compiled by Portland State University, more than 90 percent of those evictions were due to non-payment of rent.

“We need rent assistance, it’s clear,” said Molly Hogan, the director of affordable housing advocacy nonprofit Welcome Home Coalition, during the meeting’s public testimony segment. “We know you’re currently being pressured by the city of Portland to fund the mass encampment and camping ban plan that city is pushing forward. We ask that you… continue to meet with and listen to people most impacted by this plan who overwhelmingly say they do not want it.”

Wheeler and Ryan responded to the vote in a joint statement Thursday.

"We are disappointed that the Multnomah County board failed to fully fund our budget request for an initiative that has received overwhelming public support—though our work continues," the statement reads. "This is the right strategy for Portland and we will continue working toward compassionate solutions."

The majority of testimony offered by the public Thursday supported JOHS’ budget recommendation. Kafoury thanked the speakers before delivering her closing remarks.

“All of these interventions take real, intentional, and sustained work to build up,” Kafoury said. “Today's vote won't address every need right now. The circumstances we are wrestling with today did not spring up overnight and it will take time and diligence and courage to come to the other side of it. But I'm thankful for the chance to move these critical investments forward."