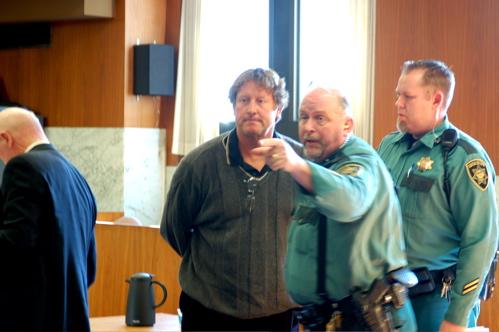 Yep, that's Bill Sizemore being hauled off by Multnomah County Deputy Sheriffs, after Judge Janice Wilson read a lengthy opinion finding the initiative king in contempt of a 2003 judgment barring certain campaign activities (like collecting nearly a million bucks for his personal use, in connection with his political activities). Fortunately, Matt Davis was at the courthouse for an unrelated case, so he snapped the pic.

He could be out in just a few hours, as Judge Wilson ordered "him jailed until he purges himself of contempt by signing the required forms and reports and filing them," or until June 1, 2009, whichever comes first. Sizemore's attorney indicated the papers would be signed and filed later today. Judge Wilson said something along the lines of believing it when she sees it, and until then, he's in jail. (And here's his booking page.)

"He holds the keys to that lock," noted Richard Schwarz, of AFT-Oregon, one of the plaintiffs in the case.

Judge Wilson also ordered Sizemore to repay the money he's collected, with the amount to be determined in a future hearing. More details to follow. 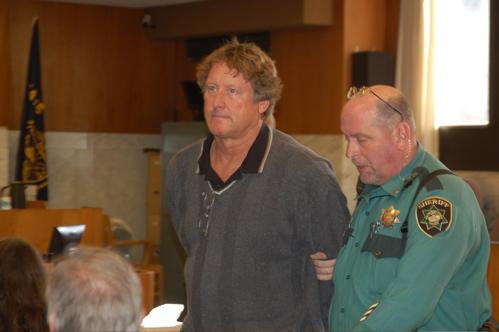 Comments 9
Tags: Politics Blogs
If you enjoy articles like this, please help the Mercury continue our mission of providing up-to-the-minute information, progressive journalism, and fun things to do in Portland by making a small recurring monthly contribution. Never forget: Your help is essential and very much appreciated!
CONTRIBUTE NOW