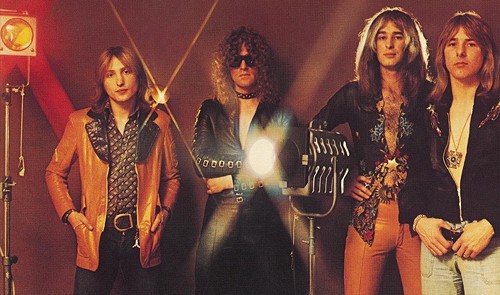 It's been a tough time for glam rock. Following David Bowie's death last week, which saw an outpouring of grieving fans across the globe, the BBC reported today that Mott the Hoople drummer Dale "Buffin" Griffin passed away yesterday in his sleep at age 67.

The timing of Buffin's passing is a little eerie, coming so quickly on the heels of Bowie's death. Mott the Hoople are best known for their song "All the Young Dudes," which Bowie wrote and presented to the band in 1972 as they were on the verge of breaking up. Bowie urged the band to reform and produced Mott's All the Young Dudes album, just as his own career and the Ziggy Stardust album were exploding—a prime example of Bowie's artistic generosity. He even offered them "Suffragette City" (they turned it down).

But Mott the Hoople were much, MUCH more than Bowie acolytes. They'd had a fitful career long before Bowie came into the picture, with four albums of lumbering, unhinged rock that married Bob Dylan's literate qualities with the Rolling Stones' rocks-off bacchanalia. And they possessed, in Ian Hunter, a songwriter every bit Bowie's equal—indeed, Hunter is one of the greatest (and most undersung) songwriters of all time. (Check out my 2012 interview with Hunter here.)

With Buffin steadfastly remaining behind the kit and driving the band from the backseat, Hunter and Mott the Hoople carved a remarkable second act, building on their "All the Young Dudes" breakthrough with two further albums of splendid rock 'n' roll. 1973's Mott remains their high point, a perfect album with thunderous power chords, platform-booted glam, and a pair of shiveringly good acoustic songs from Hunter. Here's the album's centerpiece, the heartbreaking "The Ballad of Mott the Hoople (26th March 1972, Zürich)," which was written by the entire band, one of Buffin's few songwriting credits on a Mott album. In the lyrics, Hunter namechecks Buffin along with his other bandmates—bassist Pete "Overend" Watts, guitarist Mick Ralphs, and organist Verdon Allen—in a song that documents how the band almost called it a day before "All the Young Dudes" came along.

Dale Griffin remained Mott the Hoople's strongest champion after original band broke up in 1975, forming the splinter groups Mott and British Lions in the following years, and remaining keeper of the keys to the band's historic archives. He also found a second career in record production, producing albums for bands like the Cult and Hanoi Rocks, along with countless session for radio DJ John Peel. He was diagnosed with Alzheimer's in 2007 and was prevented from drumming the full set with Mott the Hoople during their 2009 and 2013 reunion shows (although he did participate in the encores for the 2009 sets).

The greatest part of Griffin's remarkable legacy, however, remains those eight classic Mott the Hoople albums, from 1969's self-titled affair to their final live album from 1974. The band's roughshod energy is evident on works like Brain Capers, which at times feels like a car driving off a cliff, but Buffin always managed to keep the group in check with his soulful, powerful drumming.

Ian Hunter already wrote the perfect epitaph for Mott the Hoople with their farewell 1974 single "Saturday Kids," which remains one of the most affecting and moving songs about playing music ever written. It's a perfect encapsulation of Mott the Hoople's story and, now, serves as a tribute to Griffin's life and work. I'd definitely recommend listening to the song below, but you should also seek out the fantastic 2011 documentary about the band, The Ballad of Mott the Hoople—you can read a little more about it here. Rest in peace, Buffin.