Skip the dumpster... the latest celebrity and local garbage is right here in THE TRASH REPORT. 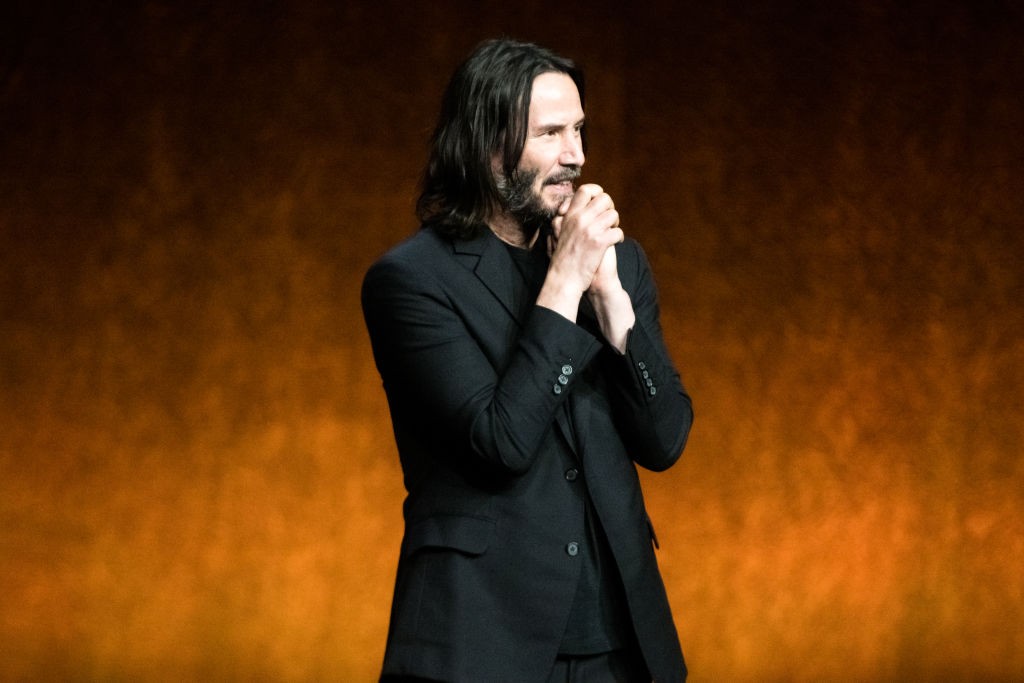 “I am begging you to keep me out of whatever is happening.” Greg Doherty

Helloooooooo, trash pandas! It's me, Elinor Jones, coming at you from the bottom of the dumpster. Happy Halloween! My costume this year is "woman who isn't losing it." Is it working? Let's see! I've worked extra hard on this week's column because things out there are bleak and I need it as much as you do. Come with me if you want to live watch me work through some stuff!

Twitter has been trash for a long time, but now it's officially trashier since the takeover by failed children's submarine engineer Elon Musk has gone through. This had the effect of immediately empowering a bunch of trolls to tweet the N word, and Musk also appears to have reactivated the account of the rapper formerly known as Kanye West, which had been deactivated for his horrific antisemitic tweets. Wow, I hate this! Twitter is my favorite place to go on the internet. Nowhere else can you totally roll the dice on whether the feed will be the most delightful rush of dopamine ever (the night Trump had COVID) or so depressing you want to walk into the sea (now, I guess.) Like, that high of discovering a charming emu, and then the low of learning said emu's farmer is racist. Nothing else like it! The only way that kind of Russian roulette exists IRL is actual Russian roulette, and I'm not quite there yet, but let's see where this goes.

I have nothing but support for the many, many smart people who have left the platform. But I'm probably gonna stay for a while. I was on tumblr when Yahoo! bought it for over one billion dollars and then tumblr users (myself included) produced content so stupid and pointless that the site lost virtually 100% of its value. That was a fun ride! So, I would like to be on Twitter for the collapse. Whether that's the collapse of the site or the collapse of civilization as we know it is TBD, I guess!

Speaking of twitter: Non-affiliated Oregon gubernatorial candidate Betsy Johnson has been zigzagging all over the state, recently stopping in my hometown of Hood River. She tweeted the following: 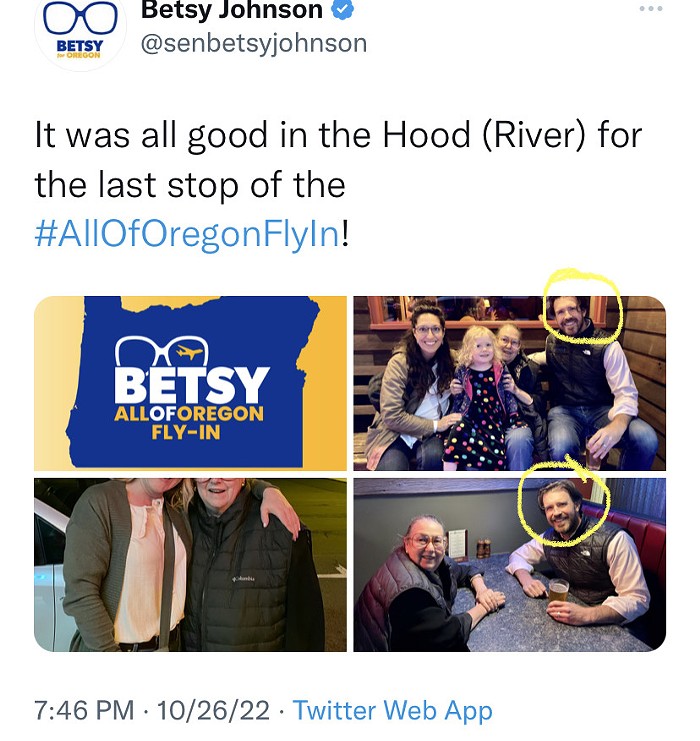 Lady, are we not supposed to notice that two of these pictures are of the same dude?? Does she actually only have three adult supporters in the town?! LOL! Way to *not* show up, HR. Keep reserving that right to deny service to someone who's owned by the gun lobby and might be responsible for Oregon electing the anti-abortion, pro-Trump Republican Christine Drazan instead of the completely reasonable Tina Kotek.

BY THE WAY: HAVE YOU VOTED YET?! Let us tell you how!

Senators, Abortions, and You!

Speaking of elections, the senate race in PA between shorts-wearing stroke survivor John Fetterman and Oprah's greatest mistake Dr. Oz has gone from hot like a Philly cheesesteak to hot like diarrhea on day three of a tea cleanse you purchased from a snake oil salesman like Dr. Oz. Right-wing news orgs are trying to get voters to focus on Fetterman's speaking style instead of the reality which is that Dr. Oz said with his own mouth that abortion decisions are best left to "women, doctors, [and] local political leaders." Whooooooooa what? No crudites for you, Mehmet!

Down in Georgia, the senate race between Herschel Walker and Raphael Warnock has also been heavy on abortion, but instead of talking about what abortions a person can have, it's more on what abortions a candidate has paid for, as another woman came forward to share that Walker paid for her to have an abortion. Walker denied the claim, which was probably hard for him to do, because it could invalidate that punch on his punch card, and he is so close to a free sub.

Football top guy Tom Brady and supermodel Gisele Bundchen have filed for divorce after months of speculation. The couple put out statements saying that they'd grown apart, but if you've seen any pictures of them together from the last five years or so you'd see that the problem was that they had in fact completely grown together.

Like, how is this not the same person in different wigs??

This is like when a fertilized zygote splits and you end up with identical twins. Anyway, I took the liberty of simplifying all future Portland Mercury coverage of this pair by creating a catch-all image: 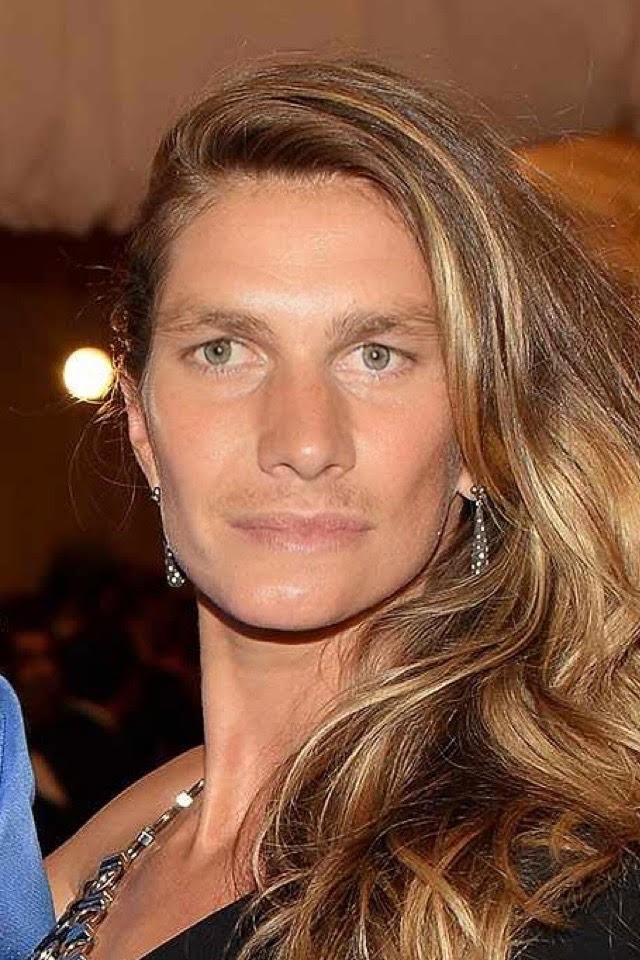 In other unholy combinations: Friends star Matthew Perry found himself in hot coffee served in a charmingly oversized mug for dissing beloved kindness king Keanu Reeves. The gaffe came during Perry's press for his upcoming addiction memoir Friends, Lovers, and the Big Terrible Thing, in which he discusses having gone to rehab over a dozen times in the last 20 years. The full text of Perry's jab was "Why is it that the original thinkers like River Phoenix and Heath Ledger die, but Keanu Reeves still walks among us?" Very bad! But, surprisingly, I will be at Perry's defense here, because this is exactly the type of joke that a person who's spent the last 25 years on drugs or in rehab would say! This joke would have killed in 1997! Perry has had too much shit going on to possibly know that Keanu is untouchable now. As clear evidence of his current sobriety, Perry has since apologized. He was like: "Could I be any more sorry I went after absolutely the wrong guy?"

The sale of the historic Beatrice Morrow Cannady house in NE Portland recently closed for a cool $1,135,000. The house is historically important to Portland's Black community for a variety of reasons that I encourage you to learn more about, and was the subject of community fundraising by artist Intisar Abioto, who sought to carry on Cannady's legacy of using the home as a space for community activism and art. Alas, an as-yet-undisclosed buyer won out. I hope that the buyer will be a good steward for the property!

If you also have over a mil to spend on a home and want something of significant cultural importance, might I recommend this beautiful home in Washougal, Washington, that is modeled to look like a guest home in Jurassic Park?

When Jurassic park is life 🦖🦕

The house is listed for a cool $1.3 million and boasts 3 bedrooms, 2 bathrooms, a jacuzzi, and several animatronic dinosaurs. The listing doesn't say if one of those animatronic dinosaurs is a T. Rex that perches over a toilet and leans over to chomp your body while you're dumping out? I assume yes! And do we think it includes a feature that drops Samuel L. Jackson's severed arm onto your shoulder at random times? Who wants to request a tour with me to ask these hard questions??

Okay, I, like many other chronically online people, will be spending the rest of this week trying to figure out if the bad man with hair plugs will break our preferred venue for crying for help, so please take this special day to appreciate one of the greatest gifts it's given us:

Tbt to Halloween when I dressed as the babadook but my friend's house had more of a grown ups drinking wine vibe pic.twitter.com/PoGKUFeLLw

Be safe out there!