The changes could ramp up frequent service and expand transit access to underserved areas. 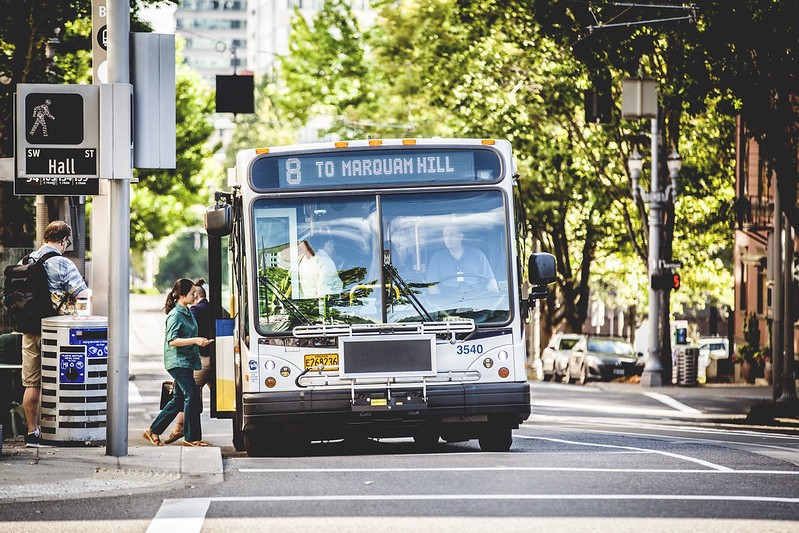 Following dramatic changes in ridership during the COVID-19 pandemic, TriMet is drafting a plan to overhaul its bus service and increase ridership in an equitable way. The plan, dubbed “Forward Together,” would add bus routes in low-income neighborhoods while cutting routes in more affluent areas, strengthen connections with Portland suburbs, and expand weekend service. The agency is now seeking feedback on the possible service changes.

“This whole concept is a question rather than a statement,” said Jarrett Walker, a transit consultant with Jarrett Walker and Associates who helped develop the plan. “Here is a thing we could do, here is a degree to which we could turn the dial toward equity. Maybe we turned it too far, maybe we’ve turned it not far enough—what do you think?”

TriMet’s ridership plummeted by over 60 percent in April 2020 as offices and businesses deemed nonessential closed during the beginning of the pandemic. TriMet currently serves about 50 percent of its pre-pandemic ridership and while riders have slowly been returning to public transit, the way they travel has changed significantly. For example, rush hour commuters are no longer a significant bulk TriMet’s ridership now that more businesses have adopted a hybrid work model. TriMet last conducted a major service plan evaluation in 2018 using data from 2011 to 2016. Given the growth of the region since the previous evaluation and the emerging changes to how people use public transportation following the pandemic, the agency decided to reevaluate how TriMet can meet riders’ needs more effectively through the Forward Together plan.

The changes are vast and detailed in the Forward Together plan and TriMet’s line-by-line breakdown of the possible updates. Generally, the changes focus on expanding riders’ “access to opportunity,” which is defined by what businesses, jobs, services, and other opportunities a rider can access within a 45-minute bus ride from their home. For example, if a rider was starting at NE 148th and NE Halsey, they could reach 45 percent more job opportunities and four more grocery stores in 45 minutes using the Forward Together service plan compared to TriMet’s existing bus network.

The Forward Together plan also aims to strengthen TriMet’s grid pattern of service in East Multnomah County and Washington County by adding over a dozen new bus lines to fill in service gaps, as well as offer more weekend service. Additionally, the plan cuts some bus service in high-income, low-ridership areas of the city like the Southwest Hills in favor of creating more frequent service in low-income, high-ridership areas of the city.

While the complete cost of implementing the plan is unclear, Walker and TriMet staff say that the plan was developed within the constraints of TriMet’s budget and additional funding for public transit from Oregon House Bill 2017, a major state transportation package passed in 2017.

According to TriMet, the service concept could change significantly based on feedback. TriMet officials plan on incorporating the public’s feedback into a new plan and presenting it to the board of directors in December. If approved by the board, the service changes could be implemented as soon as 2023, but any increases in service through the Forward Together plan hinge on TriMet first addressing its driver shortage.

“Full implementation of “Forward Together” is dependent upon ending our operator shortage,” said TriMet spokesperson Tia York. “While TriMet is making progress, we are unable to predict when that might happen.”

Ultimately, the agency hopes to implement the service changes within the next five years.