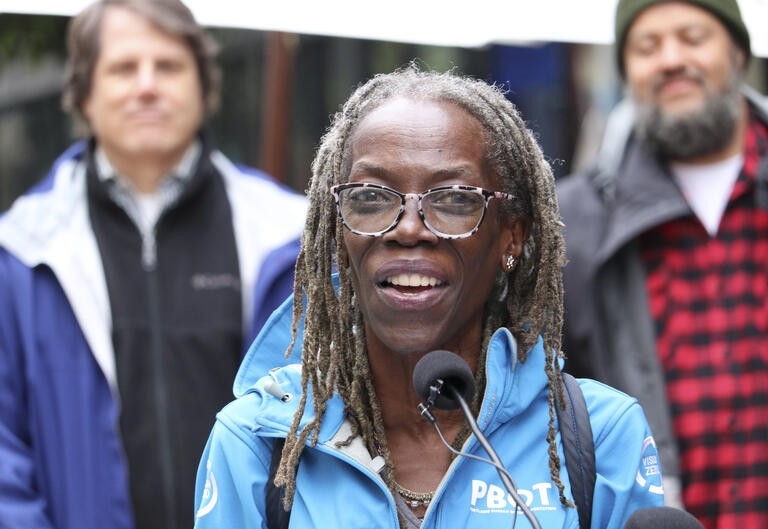 Outgoing City Commissioner Jo Ann Hardesty has represented the Portland Bureau of Transportation (PBOT) since January 2021, when Mayor Ted Wheeler assigned her the bureau despite her campaigning to oversee the Portland police.

Hardesty, who was edged out of city hall by political newcomer Rene Gonzalez in the November 8 election, took the assignment in stride, using her experience as a pedestrian in East Portland to advocate for more equitable investments in transportation solutions in that region of the city. The commissioner was also responsible for getting Portland to rejoin the Interstate 5 Rose Quarter project, and has represented the city in the revived effort to replace the I-5 bridge over the Columbia River.

In her final days as a commissioner, Hardesty talked with the Mercury about transportation projects she is most proud of, ongoing revenue struggles, and her hopes for the next PBOT commissioner.

This conversation has been edited for clarity and length.

MERCURY: In your time as PBOT Commissioner, you placed an emphasis on public gathering spaces like creating the healthy business permit program to create street seating for restaurants and the expansion of public plazas, like the Mt. Scott-Arleta Triangle project. Both of those programs have momentum and funding going forward. What future do you see for those programs?

HARDESTY: The healthy business [street seating] has saved thousands of restaurants from closing down during COVID. One of the things I loved and was honored by being the commissioner of transportation was the creativity of my team at PBOT. We tried things that we didn't know were going to work or not. We asked, ‘What if we actually expanded into the parking lot? What if we expand into the public right-of-way?’ We didn't know whether it would work, but what we did was not charge [businesses] any money to test it out.

It was highly successful and businesses loved it—they loved it so much that I was able to get the city council to make that permanent. I want these all over the city of Portland, not just in some select areas of town. [Street seating] is all over the city and we do have some plaza spaces in different parts of the city as well. It's my hope that PBOT—with the support of the community—will continue to expand those open spaces. One of the things that I learned, especially with the Mt. Scott-Arleta Triangle project, was that if you are thoughtful about how you do transportation improvements, you can also create a safer community. You can actually reduce gun violence and other sorts of violence if you slow traffic down and create places where community members can gather, not necessarily to spend money but just to be. I hope that because of the success [of those projects] the community will continue to put pressure on the city to add more and add more.

Do you think it is in the hands of community members to push the city for more public spaces? The city and PBOT won’t do that on their own?

It certainly will not happen on its own. Of course two years from now we'll have three people representing these Portlanders who will be elected specifically to advocate for their neighborhoods. [Eds: In 2024, Portland City Council will expand to 12 members, with three commissioners each representing a quadrant of the city.] But between now and then, without the community’s help, I don't see that expansion happening, especially with PBOT’s $4 billion maintenance backlog and the city's focus on temporary shelter expansions for hundreds of people.

You’ve brought up PBOT’s $4 billion maintenance backlog a lot during your time as PBOT commissioner.

I continue to remind people that that deficit started under [previous Portland Mayor] Vera Katz, and I am the very first commissioner since Vera Katz who's done anything to try to bring down that backlog. I was the one who got $450,000 from the city to actually make those investments, especially in the high-crash corridor areas.

You previously said that you wanted PBOT to come up with ideas to start to address revenue issues and that backlog. There were some ideas thrown around, like charging utility companies for the space they use under city streets. Has there been any headway on that effort?

The Pricing Options for Equitable Mobility (POEM) Task Force developed a plan [to price transportation-related costs to stabilize PBOT revenue and disincentivize driving], and we’ve actually implemented some of it. We did raise the price [of metered parking] and give PBOT the ability to raise the parking meter fee as needed, instead of having to come to the City Council every time we want to raise parking fees [Eds: While city council has indicated general support for giving PBOT the authority to raise parking rates, no official authority has been given and the bureau must still request approval from city council.] That's a huge change that will give PBOT some independence around how that process works.

The way that the new contracts with utility companies are structured will give us the ability as we start renewing those contracts to actually add a fee for maintenance and PBOT is well on the way to make that happen. But of course, you have to wait until the contract is up before you can make that happen. So we figured out how to add that service costs to make sure that the public isn’t left paying the maintenance bills when utility companies make a small fortune off of using our right-of-ways.

Can you shed some light on why the $4 billion maintenance backlog has been such a longstanding problem for PBOT?

Well, the city does a really poor job of maintaining anything that we actually own. We like shiny new things so that we can go to ribbon cuttings where we can smile and take pictures. But the reality is, three times in my time as a city commissioner when we had the ability to invest in our maintenance backlog, the mayor decided to do something different. We have a city ordinance that says anytime we have additional revenue, half of it goes towards maintenance backlog. In reality, there should be an asterisk that says ‘except if the mayor has different plans for it.’ If we followed our own rules, we would be much further along. But in my short time here, three times we have actually not followed our own rules and I'm actually a bit appalled with all the one-time money [Portland received in the past couple years] we didn't make significantly more investments in infrastructure. But, I was just one of five votes and the mayor had already made his decision and I could not change his mind, or get my other colleagues to change his mind.

You’ve represented Portland in conversations about the Interstate Bridge Replacement (IBR). In regional meetings, you and Metro President Lynn Peterson have frequently pushed the project team for more detail and questioned data presented. As that project moves forward—with a rising price tag—how do you feel about it?

Metro President Lynn Peterson, Mayor Anne McEnerny-Ogle from Vancouver, and I had made a really strong team about making sure that equity was a core component of the I-5 bridge project. I am thrilled that I was able to work with my regional partners to get us to a place where we had a locally preferred alternative [bridge design]. However, I was not surprised that the cost doubled because we'd been asking for at least the last year and a half for new cost projections because we knew the numbers we were working with were from 10 years ago.

What I want to make sure is that the ask stays the same for both states—$1 billion from Washington and $1 billion from Oregon—and that we have a plan for how we're going to get additional federal dollars to make sure that we are covering the full cost of the bridge. The big sticky wicket in this whole thing is the Oregon Transportation Commission, because until they decide what the cost sharing mechanism percentage [for the tolls on the bridge] is going to be, I am reluctant and I think the IBR team is reluctant to allow ODOT to go out and bond anything because we know once that first bond is sold and we tell that bond holder they’re going to be paid back with toll revenue, then we are stuck with tolls only paying for freeways.

If you were in the state legislature in this upcoming session and you're getting asked to vote to commit $1 billion to the IBR, how would you vote?

I would vote yes, because we made Washington state put their money where their mouth was first and now we have an obligation to keep our commitment and put our money where our mouth is. I keep reminding people that if we don't replace the bridge, it will fall at the first major earthquake, so the bottom line is we have to replace the bridge. Since we're going to replace it, let’s make sure that we're replacing it in a way that lives up to our values of climate mitigation and multimodal transit options. If it was a Portland bridge, it'd be radically different, but it's a regional bridge and I believe that this is the best proposal that we could have actually negotiated and it puts us in very good stead with our regional partners. Portland is known for being obstructionist on these kinds of projects, and I'm happy to say that the region is very grateful that I was able to help unstick this project.

What would you like to see the next PBOT commissioner prioritize?

Well, honestly I would just hope that the next PBOT commissioner doesn't screw up the good work I’ve done. *Laughs*