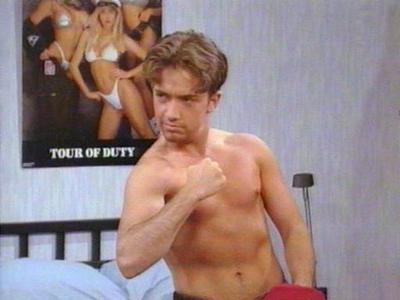 Move over Jay-Z, looks like Bud Bundy has gotten into the rap impresario game! Bud Bundy (played by actor David Faustino) is hosting the mixtape release party of one of his acts, local hiphop artist Patience Price, right here in Portland, at Dante's on Thursday, April 21. Hit us with your best shot, press release!

David Faustino and Old Scratch Artists bring you Patience Price. He will be performing at his mixtape release party, Thursday April 21st at Dantes in Downtown Portland. Patience Price, born and raised in Portland Oregon has spent the last few years in Dallas Texas developing his musical style. He recently moved to Los Angeles where he was discovered by David Faustino, the child star of Fox’s hit TV show, Married…with Children. David has a legendary eye for spotting hip hop talent. In the 90’s David operated the first hip hop club on the Sunset Strip and helped create a showcase for local artists like Will I Am, that helped him be discovered and signed by Eazy-E.

The press release goes onto say that Patience Price's debut mixtape Adrenaline & Vodka includes "drops" from Fred Durst, Cypress Hill, and Tom Green. If Bud Bundy's legendary eye for hiphop talent is any indication (he discovered Black Eyed Peas!), we can expect Patience Price to be playing the Super Bowl halftime show in 2013.

End Hits: Sorry, but we get all our hiphop from that blonde kid on Who's the Boss.