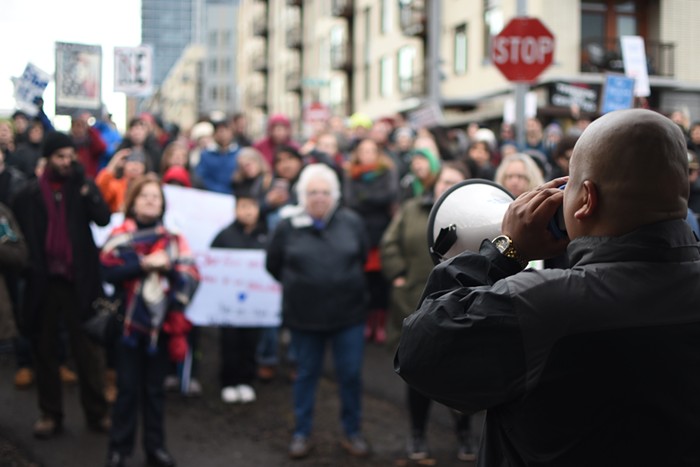 President Donald Trump and his administration are continuing their reign of racist authoritarianism today, adding to the ballooning heap of nonsensical and cruel policies implemented since this conscienceless disgrace was elected.

The Trump administration, through Attorney General Jeff Sessions, announced today that they are ending the Obama-era program known as DACA—Deferred Action for Childhood Arrivivals—that protected young undocumented immigrants who were brought here as young children from deportation. It has allowed nearly 800,000 people who came to the country as children to get work permits and live without the fear of deportation if they met certain requirements, like not having a felony or serious misdemeanor conviction.

"We must also have heart and compassion for unemployed, struggling, and forgotten Americans," explains a statement attributed to Donald Trump (it was surely written by someone else—it has multiple polysyllabic words in it) about why it's necessary to boot Brown people from the only home they've ever really known.

Here, locally, One Oregon, Causa Oregon, and the Oregon DACA coalition organized a large press conference and rally on the Portland State campus this morning.

At 5 p.m., Voz Hispana Cambio Comunitario and Milenio.org are organizing a rally at Terry Schrunk Plaza outside of the of the federal building at 900 SW 5th Ave. downtown. More than 1,300 people said they're going on Facebook.

***Update***
Here are some statements from people and organizations relevant to Oregon politics.

Five years ago, the federal government made a deal with immigrant youth: As long as you pass a criminal background check you can live, study, and work here. Hundreds of thousands of young people came out of the shadows and accepted the government’s offer in good faith and worked hard to build their lives here.

Today, the government and President Trump went back on their word, threw the lives and futures of 800,000 Dreamers and their families into disarray, and injected chaos and uncertainty into thousands of workplaces and communities across America.

In Oregon alone, over 11,000 of our neighbors used their DACA status to give back to our country in innumerable ways: they are our doctors, soldiers, and students. Our neighbors, family, and friends.

Now, the fate of 800,000 young adults, who call this country their home, lies in the hands of Congress. Lawmakers such as Representative Greg Walden must decide if they are on the side of Dreamers and our country’s foundation or on the side of the ugly forces that helped to end DACA.

While this is a hard day for the immigrant community and America as a whole, we will continue to fight. Years of courage, sacrifices, and organizing won the DACA program in 2012. Nothing will deter these Americans and our allies in Oregon and across the country from continuing to fight on behalf of their futures and holding those responsible accountable.

President Trump’s move to go back on our promise to DREAMers is not only heartless, it’s shortsighted. Since DACA was implemented five years ago, 11,000 Oregonian DREAMers have strengthened our local economies and the fabric of our communities. These are young Americans who came here through no fault of their own as children, and know no other home. DREAMers are productive and contributing members of our society, and ending this program would be not only a heartless betrayal, but also a devastating $460 billion blow to America’s economy.

America is a nation that keeps its word – but President Trump fundamentally betrayed that promise today. This is not ‘law and order’; this is tearing families apart and shaking the foundations of our local economies.

We cannot turn our back on nearly 800,000 courageous young leaders. These are our friends and our neighbors. I won’t stand idly by as President Trump tries to recklessly and heartlessly remove them from this great nation. I’m going to fight vehemently to ensure that they can keep contributing to the nation that they love.

This move is cruel and heartless, and there are 800,000 reasons why. DREAMers call the United States home. They are our neighbors, friends, colleagues, and classmates—and they put their faith in the U.S. government by coming forward and registering for this program.

Trump may try to break our commitment to them, but Americans overwhelmingly stand with DREAMers and want a path forward for them here in the United States. Republican leadership must heed this call. Words are not enough. We need an immediate vote on legislation to permanently protect DREAMers.

Deporting people brought to this country as children is heartless, doesn’t improve national safety, and will have a detrimental effect on our economy. America is better than this; we don’t – and shouldn’t – penalize children for the actions of their parents. The Trump Administration’s decision to end the Deferred Action for Childhood Arrivals (DACA) program sends a message to the rest of the world that our country has lost its humanitarian spirit and inclusive values. I’ve met many ‘Dreamers,’ hard-working young adults whose parents brought them to the United States as young children, searching for a better life and working toward the American dream. Today these Dreamers are scared of what the future holds and worried about the prospect of being deported to a country they do not know. But they are also eager to give back and contribute to the communities that are their homes.

“The Dreamers deserve a chance to succeed. I stand ready, willing, and able to work with my colleagues on both sides of the aisle to pass legislation that will protect the promise that these young people can continue living their lives in the only country they’ve ever known. If Congressional leadership is willing, we can make this part of much-needed comprehensive immigration reform.

As Governor, I hear from Oregonians across the state working hard to provide for their families and prepare their children for success. I hear their hopes and aspirations, and I also hear their fears over an uncertain future as the White House takes action to terminate the DACA program.

Here in Oregon, Dreamers are an integral part of our workforce and contribute over $6 million to our state’s economy. Dreamers embody the ideals of the American Dream, and for so many, the United States is the only home they know.

I am deeply troubled by federal orders that seek to tear apart otherwise law-abiding families and undermine Oregon’s economy. I call on Congress to step up and push back against the White House’s reckless immigration policies. We need to take a thoughtful approach to immigration reform and must work to empower families and children with the tools they need to reach their greatest potential.

President Trump's decision to end the Deferred Action for Childhood Arrival Program (DACA) is a disgrace and a betrayal of America's most fundamental values. We are a better nation than one that targets hard-working young people who trusted us to help them pursue the American Dream. I urge Congress to reaffirm DACA and keep our promise. I will stand in solidarity with Oregon's DREAMERS and our immigrant communities as we work together to make Oregon a welcoming place for everyone.

I join my colleagues on the City Council in condemning today's misguided and cruel action.

800,000 young people living in America—who proudly call our country home—will be impacted by this decision.

So will their families, their friends, their communities, their employers—all of us.

Fear and uncertainty are daily realities for DACA recipients, and today's announcement only heightens those anxieties.

Today, the President violated basic American principles of fairness—that we honor hard work and opportunity for all.

That may be why over two-thirds of Americans oppose this action, and why Fortune 500 companies are speaking out forcefully.

As your City Commissioner, I stand with each of you.

As an employer, I proudly stand with Mariana Garcia Medina, a Dreamer with a very bright future in our community.

This is a moral test. We call upon the Congress to stand up for our shared values and to provide a bridge for all Dreamers seeking a life in America.

Ending the Deferred Action for Childhood Arrivals (DACA) program is nothing less than cruel and heartless. Taking away DACA undermines our nation’s economy and unravels the fabric which holds us together. This decision from President Donald Trump will hurt families seeking refuge, puts the future of thousands of young people into jeopardy, and will potentially destroy millions of families by mass and senseless deportations.

In Oregon, this decision impacts over 11,000 people. They are our co-workers, our classmates, our friends and our family. They deserve respect. They deserve compassion. They do not deserve to be attacked, intimidated and shamed for being a vital part of our country, states, and communities.

We, as a nation, can and must do better than this. The unions of the Oregon AFL-CIO will stand with these brave young workers and will continue to fight for legislation so that the contributions they make are celebrated, rather than assaulted.