The mood was tense as Mayor Sam Adams waded out into the crowd of neighbors, urban planners and Winterhawks fans with a microphone, searching for questions. There were a lot. A crowd of about 250 packed Leftbank tonight wanting answers about the proposed Rose Quarter redevelopment plan, which involves tearing down Memorial Coliseum to make room for the Beavers AAA ballpark. Adams announced the plan last week and Council votes on the ballpark siting April 22nd.

"How can we spend money on this when there are so many other services and what happens if Paulson walks away from us?" said Adams, repeating a citizen's brief oration about cuts to homeless funding, "Okay, good question."

Several members of the audience echoed the Little Dubai sentiment, asking why the plan to revitalize the Rose Quarter with 235,000 square feet of retail, a 2,500 seat theater and the new stadium was moving on such a fast timeline.

Some citizens did not parse their words, given the face-to-face opportunity with the mayor. "It's like tearing down a Rothko and putting up a Dumpster!" said one designer. "I think there's a lot of ego and greed involved in this. There's no way we can 'respectfully' tear down Memorial Coliseum!" said an aging lady, forcefully. 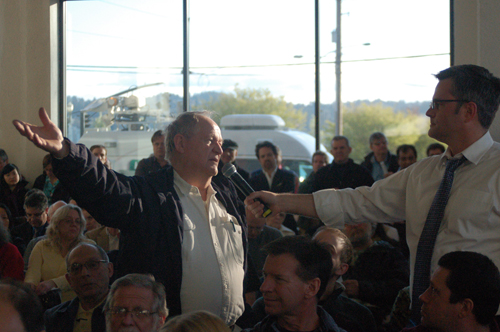 One aspect of the plan that raised particular ire was the city is prioritizing saving two parking garages at the north edge of the Rose Quarter rather than saving the Coliseum. The Major League Soccer deal worked out with Merritt Paulson relies on funds from the spectator fund, which the parking garages pay into.

After collecting 50 questions on 10 large sheets at the front of the room, Adams and his small team presented briefly on the city's current working options for the district and then ripped through the answers, spending between 15 and 30 seconds on each question.

In regards to the fast timeline, Adams stressed that there has been decades of planning for the Rose Quarter, but little action. To his left, a poster listed the nine plans for the area that have been implemented since 1988. "Finally, after decades of planning, we can have a mixed-use ecodistrict in the Rose Quarter," said Adams, noting that the fast timeline is due to both Major League Soccer's deadlines and that the bonds to fund the MLS deal expire in 2013. "We will not use money for this deal that would otherwise be spent on services," Adams promised.

To the passionate arguments against tearing down Memorial Coliseum, Adams said, briefly, "It can be purposed, reused and recycled." Another veterans memorial will be built elsewhere in the city, he promised. "I really appreciated your input tonight," concluded Mayor Adams.

At the end of the evening, there was still an air of discontent among the crowd.
"This is a total joke," said Portland Architecture writer Brian Libby, who is among the locals pushing to get Memorial Coliseum placed on the National Register of Historic Places ASAP. "If they tear down Memorial Coliseum to save a parking garage, it will be one of the single greatest acts of idiocy City Council has ever committed. Why are we even here? We shouldn't have to even have this conversation."

"I think he's trying to defuse public anger," observed Will Macht, a PSU urban planning professor who recently penned the article Coliseum Choices: An Asset too Valuable to Demolish. "The plan is not deliberate, it has not considered all the options in a professional way."

New pictures of the proposed ballpark location, plus a thought about how one creates 10,000 jobs in five years, all below the cut.

Sorry these are blurry, but you get the picture. The first option saves the parking garages at the north end of the district, placing the ballpark a few blocks off Broadway. The red-outlined building to the south of the ballpark is the planned Rose Quarter Live! development. Since this is a highly budget-driven process, it's worth noting that this is cheapest idea. 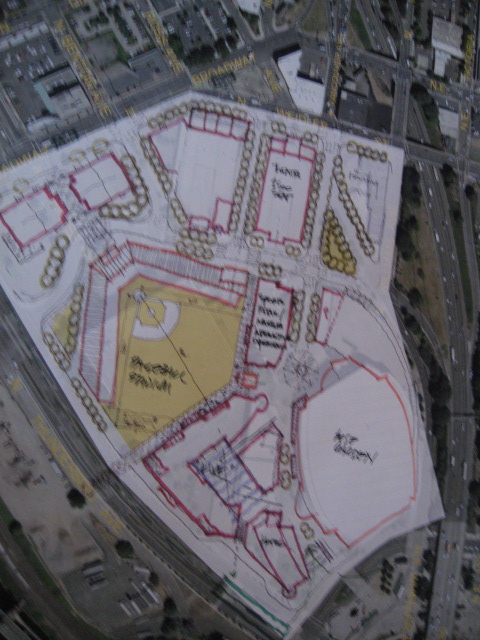 The second option puts the ballpark right on Broadway. 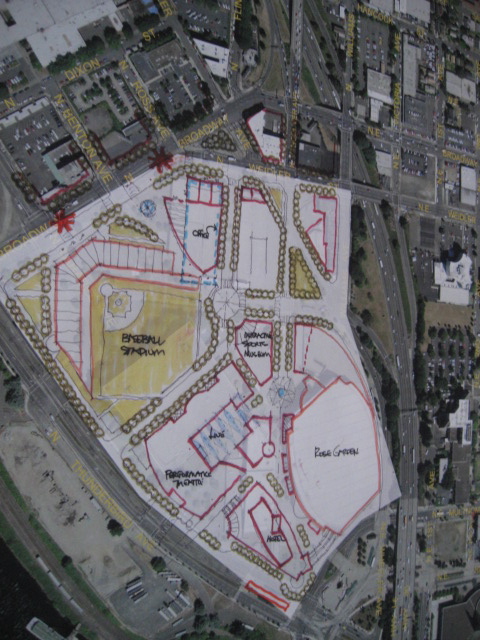 Something we didn't point out in the Little Dubai piece and no one mentioned at the open house, either: while all this tearing down and construction is creating controversy, it's also going to create jobs. When Sam announced his goal to create 10,000 Portland jobs in five years I was skeptical it could realistically happen. But if he keeps pushing big, fast-paced projects like this, the mayor could hit his 10,000 jobs goal on target.

Comments 30
Tags: City Hall Build Out Blogs
If you enjoy articles like this, please help the Mercury continue our mission of providing up-to-the-minute information, progressive journalism, and fun things to do in Portland by making a small recurring monthly contribution. Never forget: Your help is essential and very much appreciated!
CONTRIBUTE NOW