The Daisy Cafe is, according to owners Johnny and Kristina Nunn, a “love letter to old Portland breakfast”—which is to say it’s a bright, friendly café cheerfully slinging the least adventurous, most dialed-in breakfast in the King neighborhood. With a focus on traditional presentations of house-prepared meat (pork sausage, smoked pit ham) and baked goods (biscuits, brioche), expertly cooked eggs, and the crispety-crunchiest fried potatoes the world has ever known, Daisy Cafe is proudly vanilla—or maybe maple. The most out-of-the-box item on the menu, a coffee-cake-crusted French toast, is the kind of subtly ingenious quarter-turn twist on a classic that reminds you that a pretty damn smart chef is poaching eggs in the kitchen. Drinks are equally classic: spritzes, mimosas, and a bevy of Bloodies, making even a weekday morning a party.

(Sidebar: Daisy Cafe hops on the trend of renaming the Bloody Mary dependent on which liquor they sub in for the vodka. This was cute when it started, but if we can’t decide as a culture whether, say, an aquavit Bloody Mary is called a Bloody Magda [as at P’s & Q’s Market] or Bloody Margit [Daisy Cafe], how are we ever supposed to solve health care or pick the best old white guy to run the country? Free idea to any bartender reading this: splash some Kentucky bourbon in a michelada and call it a Mitch McConnellada. Served in an upside-down turtle shell, on the menu but unavailable when a Democrat is president.)

If you like Daisy Cafe’s trend toward traditional American breakfast but want something heavier on the “American”—just literally heavier—wait until you see the glorious excess on display during the new weekend brunch service at Maya Lovelace’s casual fried chicken spot Yonder. The biscuit sandwich, for instance, is not called the Behemoth for nothing: sandwiched six inches high between saucer-sized angel biscuits, it’s got fried chicken, bacon, American and cheddar cheese, and two kinds of sauce. The chicken is also available on a plate with eggs or smothered in gravy with hash browns, and for a non-bird option, there’s also fried catfish and grits. Sweet breakfast isn’t neglected, and while huckleberry biscuits are tempting, the pound cake waffle is not to be missed. Dense but not overly heavy, it comes slathered in whipped cream and fresh fruit, and even edible flowers.

Don’t sleep on the brunch drinks at Yonder, either. Their iced coffee with buttermilk lemon sherbet and cocoa nib rum will wake you up just in time to rock you back to sleep, and the Kudzu Mary is brilliantly made with potlikker, the savory liquid from a pot of collard greens. The most dignified option is the Rubybird, a cocktail of Campari, vermouth, and soda, but with a chicory coffee and vanilla counterweight. It’s as lazily refreshing as a southern summer breeze.

If edible flowers just sound a little too grown-up for your Saturday morning, try Indonesian-Chinese spot Gado Gado’s new brunch, which features a featherweight puffy waffle, pandan-green under cocoa whipped cream, maple, and Crunch Berries. (Yes, the kids’ cereal.) Gado Gado also fries some chicken up for the AM crowd, either on a plate or in bubur ayam, a rice congee with an egg, fried shallots, corn, rousong “pork floss” that’s like cotton candy made of meat, and a big old shrimp chip. It’s not to be missed. Neither, however, is the scrambled egg uni toast. I thought the uni butter was subtle enough, but my urchin-averse brunch buddy still found it overpowering. Maybe we should have added the osetra caviar for $25.

As for drinks, Gado Gado will blend up a frozen coffee with avocado, orange, cardamom, and sweetened condensed milk (the latter being the secret weapon of the entire brunch menu) or mix up various spiced and very healthy sounding juices (turmeric-tamarind-ginger or coconut-lime-pandan). But you’ll feel no worse for ordering a fish-saucy Bloody Mary, or an Immunity Idol—a tasty little tequila operation with tamarind, coconut, and warm spices.

If, however, you like your brunch late and every day of the week—if, say, your first meal is at noon and you prefer to drink most of your calories—North Williams hotspot Eem now has you covered. The weeklong lunch menu takes some favorites from the dinner menu’s shareable small plates and turns them into single-dish meals like a hot fried chicken bowl with rice, greens, and veggies, or the BBQ pork fried rice, which haunts my daydreams. But there are also a few new favorites to be found: salt-and-pepper squid, the previously late-night-only cheeseburger, and a couple of brunchier items, like pork belly and a fried egg, or a version of shrimp and grits that sets barbecued shrimp over rice porridge with roasted carrots, chopped ginger, chili jam, and an egg. It looks simple, and maybe it is, but it’s good enough that I left wondering if Eem might not be even better at lunch than at dinner. The blended piña colada is a delicious nap in a glass, but Eem’s ambitious virgin cocktail program is even more welcome in daylight hours, and there’s something viscerally satisfying about drinking a Thai iced tea called Goth Tears in direct sunlight.

Oh, and since I know you’re worried: No, I didn’t stand in a single line at any of these places. 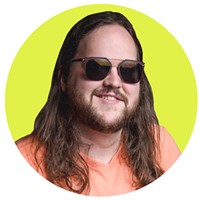