Love boating or cruising for a bruising? designprojects / iStock / Getty Images Plus

Hi everyone, and welcome to another edition of The Trash Report! It's me, Elinor Jones, first and foremost offering my most sincere congratulations on surviving another week. It's...grim.

BREAKING: in a landmark 6-3 decision the Supreme Court has ruled Americans can eat shit and die
— ben wasserman (@benwassertweet) June 30, 2022

While the Supreme Court is dead-set on ruining our summer, and all subsequent summers—because their recent EPA ruling is like giving a high five to the planet becoming uninhabitable—the one bit of good news from the bench is that Ketanji Brown Jackson was sworn in, on THursday June 30, as the first Black woman to serve as a Supreme Court Justice. Imagine starting a new job, and on day one six of your new coworkers were straight up like "we don't want your children to breathe clean air." I know she was sworn in for a lifetime appointment, but nobody would think poorly of her if she immediately gave her two weeks.

Also rocking DC last week was the testimony of Cassidy Hutchinson before the January 6th Committee. Many are fawning over this woman who—lest we forget—voluntarily worked in the Trump White House for spilling the tea under oath. But can we really say she spilled the tea if she was subpoenaed? It’s more like, she safely guarded a cup of tea for a year-and-a-half while evil people walked free and threw ketchup everywhere, and the country descended further into chaos and then Liz Cheney ripped it out of her hands.

This is a gift:

Just Tell Us the Truth, Re: Crackers

This got people quite excited:

Okay but like, what the fuck? I’d never really thought about it too hard, but I guess I always assumed that Cheez-Its were the size that they were due to some engineering or production of the snacks. To know all this time that they could have been bigger but weren’t is honestly a slap in the face. From here on out, I will demand that all crackers be tostada-sized unless I'm presented with clear evidence that they can't be. Just tell the truth!

Just Tell Us the Truth, Re: Violence Against People Experiencing Homelessness

A man experiencing homelessness, known only as Scotty, is in critical condition after being stabbed to near death in downtown Portland last weekend. At least one local news outlet took pains to not identify Scotty as a victim of violence: 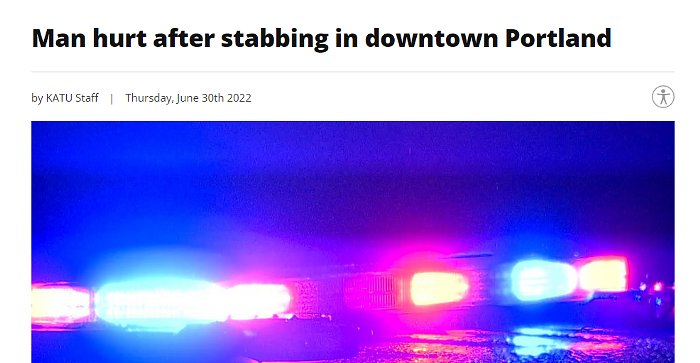 Headline from a KATU article on the stabbing.
To say a man was hurt after a stabbing makes it sound like there was a stabbing, and then later, a man slipped on a banana peel. The reality is that a human being was nearly murdered while sleeping on the sidewalk because his shelter was taken during an Old Town sweep. A man wasn’t hurt after a stabbing. A man was hurt during a stabbing, because he was stabbed. Just tell the truth!

Many celebrated the close of June in pleasant temperatures after the hell of last summer's 116 degree day. But what we lacked in spiking temperatures, Oregon has made up for in spiking COVID cases. The current wave was supposed to have peaked mid-June, but we're keeping Portland weird and by "weird" you mean "a hotbed of disease."

Wow okay, that's about all I can write for now! It's the 4th of July and I have some hot dogs to eat—not to celebrate this hellhole of a country, but to celebrate the continued humiliation of "America's Mayor" Rudy Giuliani:

Be safe out there and—if you must set off fireworks—please use only the quietest of fireworks so as to not alarm my cats, who are very simple.