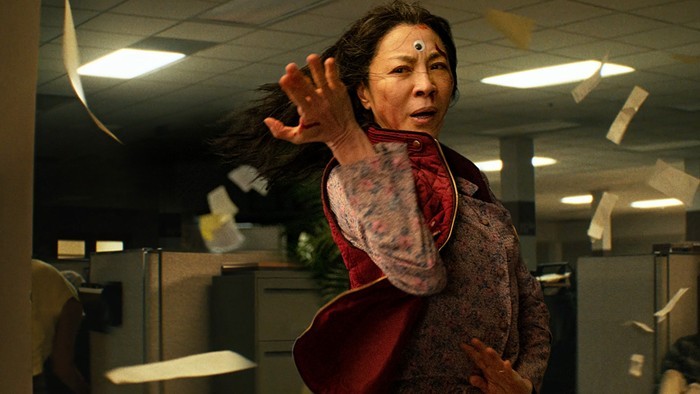 Courtesy A24
Evelyn Wong has come unstuck in the multiverse, and you are invited to join her.

The literally-otherworldly Everything Everywhere All at Once is not merely a film but something like a neurological experiment. Or perhaps the last hundred years of cinema was an experiment leading up to this? You will remember not just where you were when you first saw it, but the excited conversations that you will have in the days that follow.

Living up to its name, the film is a boundlessly inventive experience, a touching family drama, an adventure, a science-fiction voyage, a fashion show, a punny tone poem, a fight, a love story. It is very beautiful and very very funny.

EEAAO opens in disguise, looking convincingly like a Very Important Independent Film You Have Seen A Million Times Before. Evelyn Wang (Michelle Yeoh) owns a struggling laundromat and obligations besiege her: The customers are needy, the machines are temperamental, the IRS demands an audit, her father is ill, her husband feels neglected, a rift with her daughter deepens by the day. Despite trying to do everything everywhere all at once, Evelyn feels as though all she can accomplish is nothing at all.

Then the multiverse breaks.

That is just the first surprise in a film that — in the screening I attended — elicited audible gasps for the entire two-hour running time, constantly delighting the audience with impossible-to-anticipate twists, each one wisely spaced out like a trail of dominoes that get stranger and stranger as they fall. Riding an elevator to what will surely be a catastrophic meeting with an IRS agent, Evelyn’s husband twitches for a moment, and his demeanor transforms. He has now become a vessel for a visitor for another dimension, he tells her, searching for the one chosen-Evelyn who can restore harmony to time and space. (I can hear the pitch now: What if The Matrix’s Neo had been a mother in her late fifties?)

Evelyn doesn’t believe his story, until he proves it — hilariously, terrifyingly, and beautifully, kicking off an exploration of all the branching paths her life could have taken. (What if Sliding Doors was a martial arts movie?)

Universe-hopping, in this film, is facilitated through improbability. The more unlikely your behavior, the easier it becomes to get where you’re trying to go. This provides an excuse for some truly marvelous sight gags, including an extended martial-arts maneuver that reduced an entire theater to screams louder than the film itself.

And yet each bizarre turn is really just scenery in support of the story’s sly soul, a heartfelt multi-generational immigrant story. Evelyn’s universe-hops take her to alternate versions of her family, where she can hash out past mistakes and negotiate the future. This concept could have been awfully confusing (what if Dr. Strange was a character in Antonia’s Line?) or extremely boring (what if Run Lola Run was Talk Lola Talk?) but EEAAO eases the audience gently into the rules, and keeps the pace up with a tireless backbeat of action and humor.

I’ve been referencing a lot of movies in this review in an attempt to illuminate a work of art that is so unique there are few signposts for comparison. It’s clear that the film is made by people who love genres, since it’s a sampler-platter of so many. (Cinema snobs, watch for some references delivered via — of all things — lens choices and manipulation of the aspect ratio.)

But comparison undermines EEAAO’s greatest pleasure, which is its ability to use newness and novelty to drive a story of family estrangement that is deeply familiar and relatable. Maybe the Chinese immigrant story will resonate with you; maybe you’ll identify with the queer romance; or the marriage teetering on divorce; or the pressures of the father; or the youthful optimism for the future or the post-mid-life depression; or the action; or the sci-fi; or the couture. EEAAO delivers even more than the title suggests — more than any viewer can possibly absorb — and invites us to decide what we’re going to do about it.

It is a film that swings with constant risky choices, an un-cynical celebration of the infinite power of getting weird.

Everything Everywhere All at Once opens on April 8 at Cinema 21, Hollywood Theatre, and more.