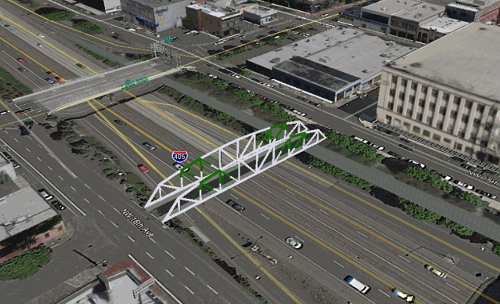 As it casts about for new funding to maintain the city's roads, the Portland Bureau of Transportation's also setting its sights on bridge-building. Not metaphorically, either. PBOT wants to build a new steel bike and pedestrian bridge over I-405.


In a grant application filed with the Oregon Department of Transportation in October, the bureau asked for $3 million to help erect a 24-foot-wide span over the highway at NW Flanders. If the money's approved, PBOT would chip an additional $3 million in transportation funds toward the project, and plan on having a bridge complete by 2019.

The proposed span would be the city's only car-free crossing over I-405. But it also would sit squarely between two other crossings—at NW Everett and NW Glisan—with bike lanes and sidewalks. PBOT, in its application, notes those streets "lack sidewalks on one side and require negotiation on and off ramps for vehicles entering and exiting I-405.

"These high-stress crossings," PBOT argues, "are enough to dissuade large segments of the population from choosing to walk or bike to work or other destinations in the Central City." The "population" PBOT's talking about are the residents of the Northwest District, the state's densest neighborhood, who the city says bike and walk less than people in parts of northeast and southeast Portland.

So needed is the bridge, PBOT says, that 20 years from now the span could see more than 9,000 users a day—about on par with current usage on the Hawthorne Bridge (which sees something like 8,000 bikes a day during the height of summer). 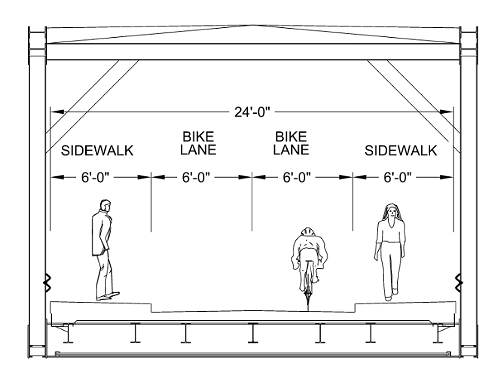 The proposal has a lot of fans. With its application, PBOT submitted letters of support [pdf] from representatives of the Pearl District, Northwest District, and Old Town, along with local employers and advocates for better bicycling and walking facilities. All of the of them speak of a need for a comfortable route over I-405.
"Currently there is no safe East-West route for people to walk and bike from the River to the West Hills," reads a letter from Legacy Good Samaritan Hospital.

The bridge is part of a project that's been an aspiration for years: Transforming NW Flanders into one of Portland's neighborhood greenways, which prioritize biking and walking safety over car access. It's also part of the city's Bike Plan for 2030, which has seen many of its most ambitious proposals languish since passing five years ago.

And PBOT is pitching the span as an "emergency lifeline route" in case an earthquake topples other bridges over the highway. According to Rivera the bridge would feature a 12-foot-wide, two-way bike path that could ferry ambulances and other emergency vehicles across 405.

So where would cash-strapped PBOT find its half of the $6 million price tag? It's planning to use system development charges, fees that developers pay when they're increasing the density of a neighborhood, and will therefore be increasing use on the transportation system. Those aren't available to address most of the maintenance issues Portland has, Rivera says.

The Flanders bridge is one of a laundry list of applications PBOT's lodged with the state as part of its ConnectOregon grant process, which each year awards millions in lottery revenue to projects that don't involved car or truck traffic.

PBOT's also requesting $3.5 million to help buy three used streetcars from the City of Seattle (Portland would add another $1.5 million to that cost), $500,000 to build a better bike/pedestrian crossing at NW Naito near the Steel Bridge (Portland would add $630,000 to that), and $570,000 to build a trail along an old tram line in SW Portland (city would kick in $300,000). Rivera said most of the money for those projects—if not all—is ineligible to pay for streets maintenance.

Of course, just asking isn't going to get Portland the money for these things, This year, ODOT received more than $90 million in requests, with just $45 million to go around. It'll be competitive. (We reported on PBOT's questionable application for ConnectOregon money last year to pay for expansion of a bike share system that didn't exist.)

And if PBOT doesn't get the nod for the bridge money? Rivera says it'll keep trying. "We intend to pursue other funding," he says. "We think it’s got potential to provide transformative bike and pedestrian access in NW Portland."

Comments 12
Tags: News City Hall Transportation Comedy $$$ Blogs
If you enjoy articles like this, please help the Mercury continue our mission of providing up-to-the-minute information, progressive journalism, and fun things to do in Portland by making a small recurring monthly contribution. Never forget: Your help is essential and very much appreciated!
CONTRIBUTE NOW