A portion of the Bullseye Glass facility in SE Portland GOOGLE 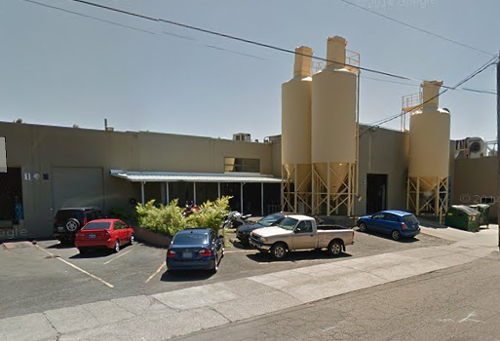 Within days, state officials are slated to release the alarming results of a monitoring program of airborne heavy metals, including arsenic, conducted this past October in inner Southeast Portland, the Mercury has learned.

The state Department of Environmental Quality and the Oregon Health Authority plan to announce that DEQ data indicate a monthly average of 49 times the state air-safety benchmark level for the neurotoxin and carcinogen cadmium, and 159 times DEQ's air-safety goal for the carcinogen arsenic.

Though DEQ is still determining roughly how far these hazardous air pollutants (as they're officially known) have spread, most immediately at risk are two Portland schools—Cleveland High School and Winterhaven K-8— and a 100-child, private day care facility on the nearby Fred Meyer corporate campus that serves children as young as six weeks old.

The likely culprit for all this, say state officials: Bullseye Glass, which has its main factory at 3722 SE 21st. Founded in 1974, Bullseye is a sizable art and architectural glass manufacturer that boasts 140 employees at its Portland headquarters and operates satellite facilities north of Oakland, in Sante Fe, and in a suburb north of New York.

“I can say, yes, we're confident it's Bullseye,” said Sarah Armitage, a DEQ air toxics specialist and the agency's point person on its investigation.

David Monro, DEQ's air quality manager for the Northwest Region said: “Bullseye?—yes, I think it's the source of the cadmium and arsenic we found. It passes the straight-faced test.”

Oddly enough, the way Oregon's environmental regulations are structured, there's not a thing DEQ can do to force Bullseye to alter its manufacturing processes and limit its toxic emissions. That's because the regulations are geared to much larger facilities—think companies that mass produce beer bottles—rather than high-end art glass manufacturers.

Under its state permit, the company is legally allowed to emit 10 tons of any given air pollutant a year, or 25 tons for any combination of two or more toxics spewing from their stacks. Those weights, expressed in tons, apply not to the physical raw material involved, but to the amount of aerosol emissions—the weight of the smoke, or smog, or plume.

According to an April 2011 DEQ “Discharge Permit Review Report,” Bullseye used 6,000 pounds of hazardous raw materials in 2009, which would have made it impossible for its emissions to even approach 10 tons. The company’s totally in the clear as far government limiting its activities—children across the road notwithstanding.

“They're in compliance with their permit,” said Monro. “DEQ can't stop them.”

Armitage put it this way: “We're finding out the regs don't control the risk from glass.”

Keith Dubanevich, an environmental attorney with Portland law firm Stoll Berne, offered this perspective: “Environmental regulations take place in one-size-fits all fashion.” So small firms like Bullseye slip through the cracks. Ultimately this means, he added, “We as a society are willing to tolerate pollution.”

Be that as it may, Stuart Batterman, a professor of both environmental health and environmental engineering at the University of Michigan, said, “That site needs to be brought under control.”

According to that 2011 DEQ Bullseye permit review, “materials used at the facility may include arsenic trioxide, cadmium, selenium, chromium, and lead as coloring agents or to produce trade-mark characteristics in the glass.” DEQ notes that Bullseye used 825 pounds of arsenic in 2009, much of it shoveled into a furnace to be melted along with all the other raw material to give some very nice glass its pretty color. The company website notes that it makes 27 different glass products that contain “more than 0.5% cadmium.”

Bullseye founder and co-owner Daniel Schwoerer was reached by phone Monday afternoon, a short time after Monro left his building.

Shaken by just then learning DEQ's findings, Schwoerer said, “We were not aware of potential emissions. All I can say is we're a good citizen. We're concerned.” He added, “I know we're in compliance with DEQ and other agencies…. We've done everything within the law to work with these materials.”

Schwoerer referred the Mercury to a staffer he said had more technical expertise: Eric Durrin, who minds the company’s finances. Durrin offered little beyond four or five robotic repetitions that “We operate our factory in full compliance with our discharge permit.” Asked what equipment Bullseye had in place to limit fugitive emissions, he stated at least twice, “We handle our raw materials in a safe and professional manner.” But Durrin was unfamiliar with the “baghouse” air pollution control device that DEQ requires his company deploy. (Monro inspected it on Monday and said it was in good shape.)

Durrin pointed to another Bullseye employee, Sam Andreakos, who he said was more involved in production, and would know better. Asked his awareness of cadmium as a neurotoxin that recent research indicates may be thought of as somewhat analogous to lead, Durrin said, “My training is in accounting.”

Andreakos, a “glass chemist” with Bullseye, declined to speak with the Mercury, saying “I don’t feel compelled to talk you.” Neither Bullseye co-owner Schwoerer nor Durrin replied to questions about whether the company would commit to suspending its use of arsenic and cadmium.

Ultimately of course, any decision rests with the private company’s co-owners Schwoerer and business and life partner Lani McGregor, who sits on the Portland Art Museum’s board of trustees.

DEQ establishes safe air goals known as Ambient Benchmark Concentrations (ABCs); for cadmium the figure is 0.6 nanograms per cubic meter (ng/m3) of air; for arsenic, it's 0.2 ng/m3. The monthly average DEQ obtained in 18 samples it collected with the current gold-standard monitor from October 6 to November 2 was 29.4 ng/m3 for cadmium and 31.7 ng/m3 for arsenic according to Armitage.

On some days, depending, apparently, on Bullseye's production schedule, the amount of fugitive cadmium released just minimally exceeded Oregon's ABC safe-air goal of 0.6 ng/m3, Armitage said. But on any given day, the amount of cadmium impacting homes and schools and businesses might have far exceeded the already dire monthly averages mentioned above.

For instance, according to Armitage, the DEQ air monitor that spent the month in a Fred Meyer parking lot cheek-by-jowl with Bullseye obtained a daily cadmium level of 195 ng/m3; another day, the figure was 133 ng/m3. Those levels are 325 and 222-times DEQ's safe-air goal.

The three highest daily readings for arsenic were 101 ng/m3; 97 ng/m3; 93 ng/m3, according to another scientist involved in the monitoring. That's hundreds of times DEQ's safe-air goal for arsenic, based on its potential as a carcinogen, of 0.2 ng/m3.
It's unknown how constant October's dangerous levels have been over Bullseye’s 42 years in business.

Aware of DEQ's findings, the Mercury reached out on Tuesday to the management of the day care facility at Fred Meyer's headquarters, KinderCare Education LLC, and alerted them to the toxic plume that washed regularly over the building—at least this past October.

“We were caught entirely unaware that any testing had even occurred, and are horrified to hear that the testing apparently indicated that potentially harmful chemicals were present in the air at the time….” Kuntz wrote. “Until we know more about the state of the air and soil quality at the center and can assess the risks of exposure present, if any, we will keep children indoors.”

Kuntz says her day care has reached out to the Multnomah County Health Department about the issue and has been told that new filters on its ventilation system will help.

“We are informed by them that proper filtration on an HVAC system should materially protect the air quality in our center,” she wrote. “They did not recommend any additional actions in response to the issue at this time….”

Batterman, the University of Michigan professor, said new-generation HVAC filters “can reduce indoor concentrations of the toxic by two times or three times the levels of the outside, ambient air.” Asked whether that should provide much reassurance to parents of kids exposed to cadmium levels 49 times the state benchmark and arsenic 159 times that level, he said no.

Batterman added that keeping children inside lowers exposure, but does not eliminate it. Asked about DEQ's findings in general, he termed cadmium and arsenic known carcinogens and said, “I'd be very concerned…. There are lots of potential effects.”

Oddly enough, DEQ actually alerted Bullseye this past September that it was about to set up an air monitor close by. The agency informed Bullseye's Durrin.

To their credit, both the DEQ and the OHA have been working at a feverish pace since receiving October's data on January 20th. Once the Mercury independently learned of the unfolding disaster, both Armitage and Oregon Health Authority toxicologist David Farrer granted frank interviews.

In conjunction with the Multnomah County Health Department, both agencies will be informing the public of their findings. The delay is due to the formulation of “risk maps,” which will indicate, to some degree, how far the cadmium and arsenic spread from its source.

That involves crunching the data from the Fred Meyer parking lot along with DEQ's air monitors located in St. Johns, at North Roselawn, and a third location. The maps should be completed this week, and then the public announcement will be made, perhaps Wednesday.

In fact, the agencies have taken tentative steps toward alerting the public. On Tuesday evening, after being questioned by the Mercury, the DEQ briefly posted a press release on its findings, which announced: “Preliminary data showing the existence of high levels of cadmium and arsenic in the air near S.E. 22nd Ave. and Powell Boulevard in Portland are prompting state agencies to investigate potential health risks from exposure to these metals.”

The agency subsequently took the release down, and has since posted a shorter version.

Portlanders can take some small comfort from the fact that there's no Flint-Michigan-drinking-water style cover-up here.

Armitage and her DEQ colleagues have been trying to determine the source of the elevated cadmium that has fouled Portland's air since at least 2004. She said, “We've been hunting for it for three years, and it looks like we found it.”

DEQ was alerted to the likely source by a U.S. Forest Service study of air toxics that show up in moss. Once the initial data hit Armitage's desk two weeks ago, it’s been all hands-on-deck, she says, to generate those risk maps that OHA wants so as not to unduly alarm all of Portland.

Still, any backyard gardeners growing leafy vegetables such as kale, which particularly leach up cadmium from the soil, well might consider eating no more till they get their soil tested.

Stoll Berne's attorney, Keith Dubanevich, said “If you're a homeowner living in the area, the argument can be made that your property value has decreased.”

Comments 71
Tags: News Blogs
If you enjoy articles like this, please help the Mercury continue our mission of providing up-to-the-minute information, progressive journalism, and fun things to do in Portland by making a small recurring monthly contribution. Never forget: Your help is essential and very much appreciated!
CONTRIBUTE NOW