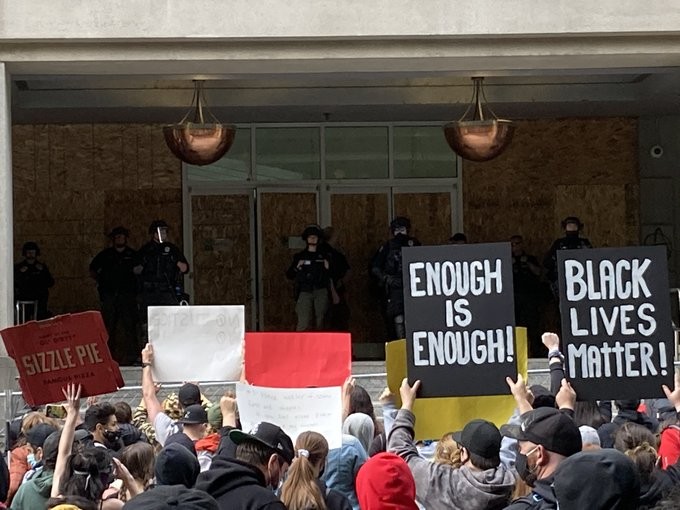 The downtown rallies have scattered and devolved into window-breaking and smaller groups of tired demonstrators. Our reporters are heading home for the night (morning?) so we can continue our coverage tomorrow. Mayor Ted Wheeler has announced another 8 am press conference Monday morning to address Portland's third night of protests. Per his 11 pm press release: "Topics will include the City’s preparations for—and response to—the large presence of protesters on hand Sunday night into Monday morning."

“Don’t do any stupid shit... we’re being peaceful. We are united.” pic.twitter.com/5UgpNBZ7na

After a long standoff, Portland police spray the crowd with a strong cloud of tear gas. Fireworks explode as demonstrators leave the area, wiping their eyes and yelling. Protesters have begun smashing in windows of Portland's World Trade Center.

Police are declaring the protest an unlawful assembly (again), ordering demonstrators to leave the area. Per the PPB's Twitter feed, officers have made two arrests this evening.

After protesters broke several windows of the Mark O. Hatfield US Courthouse, officers shot tear gas and flash bangs back into the crowd. Demonstrators scattered to avoid the munitions, only to regroup and kneel in the street, with hands raised, facing the police.

Near main and third. Protesters kneeling in the street in front of police. pic.twitter.com/hZCQcWbtnZ
— Hannah Ray Lambert (@TheHannahRay) June 1, 2020

Officers are largely staying put, monitoring the continuing demonstration outside of the Justice Center. It seems like the only explosions going off right now are from fireworks coming from rouge members of the public—to the opposition of some others in the crowd telling them to cut it out.

The guys up top were offered a Roman candle. They threw it back to the applause of the crowd. “Don’t fuck it up for the rest of us!” pic.twitter.com/rKlHbyO0Hi
— Wm. Steven Humphrey (@WmSteveHumphrey) June 1, 2020

Some protestors are now taking a knee to show they want a peaceful protest pic.twitter.com/7y7egnzX7F
— Blair Stenvick (@BlairStenvick) June 1, 2020

Demonstrators are continuing to chant, "Take of your rio gear, I don't see no riot here" to the cops along with a more direct: "Go home!"

Steve captured some of the evening's artwork:

“The boisterous sea of liberty is never without a wave.” pic.twitter.com/cM29c9hXzE
— Wm. Steven Humphrey (@WmSteveHumphrey) June 1, 2020

This is as close to First Friday as I’ve seen in months. pic.twitter.com/y4fyLLRxNr
— Wm. Steven Humphrey (@WmSteveHumphrey) June 1, 2020

The collective protest has now returned to rally in front of the Justice Center on SE 3rd and Madison, with stragglers still walking over the Burnside Bridge. Officers stand guard in front of the building's boarded-up front doors and windows (if you recall, these windows were smashed Friday night).

Messages over PPB loudspeakers aren't mentioning the 8 pm curfew violation like they did Saturday night, instead focusing on keeping the crowd peaceful.

The eastsiders have crossed into the west over the Burnside Bridge, and are heading straight to the Justice Center. Verdict's out if riot police will be treating the incoming crowd a little differently now that they've reached the tear gas side of town. Combined, there are easily 2,000 people marching in the streets.

Oh, so it's the actions of the demonstrators not the armed riot police who've spread tear gas across downtown, that are setting the tone. https://t.co/dKTYIU3xJb
— Alex Zielinski (@alex_zee) June 1, 2020

Oh, and did you see the sunset? Beautiful.

Minutes after 8 pm, armored police at the Justice Center put on gas masks and shot flash bang grenades and tear gas into a large crowd of protesters, alleging on Twitter that demonstrators were throwing glass bottles at them.

The Eastside crowd saw a different response, with officers merrily joining the crowd as the march west down Burnside (through pretty, middle-class neighborhoods, mind you).

Portland police right now:”our officers are walking with you in support.” Telling crowd, which is starting to break in different directions, to stay on burnside
— Blair Stenvick (@BlairStenvick) June 1, 2020

We're 15 minutes away from the citywide curfew, and protests seem to only be growing in size and momentum. In Northeast Portland, a groups of several hundred marchers is picking up support along NE Davis and 52 (ish).

Never seen a Portland rally like this so far from downtown city center (this is near e couch and 52nd). pic.twitter.com/ELzFp4ucK0
— Blair Stenvick (@BlairStenvick) June 1, 2020

Protesters who first met in Laurelhurst Park have left to march east down Burnside towards the Multnomah County Sheriff's Office on 47th.

A smaller group is beginning to former at Frazer Park. Meanwhile, thousands of Portlanders are still downtown, dancing and calling out chants outside of the Multnomah County Justice Center—where the city's original protest kicked off several nights ago.

UPDATE 6 PM: A large group of demonstrators are already in downtown Portland at the Multnomah County Justice Center—by some estimations, it's larger than last night's crowd.

Portland Police have said they have no intention on interfering with the downtown march "as long as it remains civil."

Tonight, remember who WE are trying to protect and serve. As we demand that PoCs voices are heard, listen to the PoCs among us. Let them lead! #BlackLivesMatter @Pdx_resistance
— Say No to Fascism (@SayNo2IPV) June 1, 2020

ORIGINAL POST: Today marks the third day of protests nationwide and in the Portland area in response to the death of George Floyd, the Minnesota Black man who died earlier this week at the hands of police. It also marks the second night of curfews instituted by Mayor Ted Wheeler for the entirety of Portland. The first night of protests were marked by fires set in the Multnomah County Justice Center and damage to high-end stores downtown. Last night, Saturday May 30, a game of cat-and-mouse was played between protesters who violated the city-wide curfew and cops, who separated the largest group and chased them to the east side of the river. The rest of the evening police focused on those who Mayor Wheeler called "agitators"—though they were mostly unsuccessful in causing any substantive damage.

Tonight starts with two protest/vigils: The first is a "Demand Justice March" to honor Black Portlanders killed by police at North Portland's Frazer Park at 7 pm, and the other a "rally against police brutality" led by the Pacific Northwest Youth Liberation Front at Laurelhurst Park starting at 6 pm. Our Blair Stenvick and Bob Ham are covering both rallies and will be reporting in regularly. Follow them or the Mercury on Twitter for minute-by-minute coverage, and check back with this post for regular updates and the big picture.