The judge believes there aren't enough commonalities between people hit by tear gas and munitions during the 2020 racial justice protests to place them in a specific class. 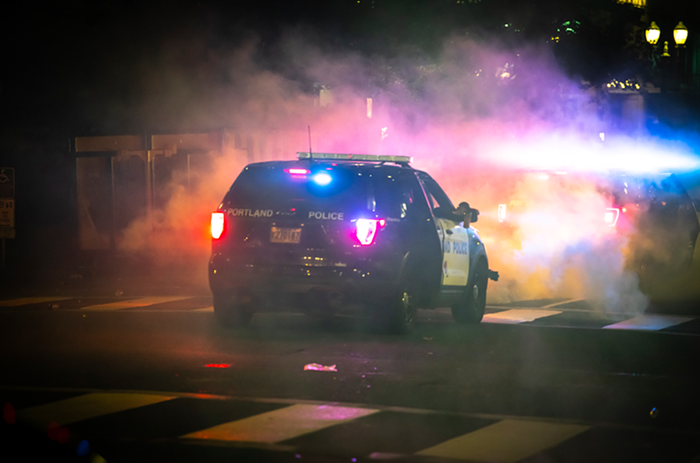 A PPB vehicle shrouded in tear gas during a 2020 protest. Mathieu Lewis-Rolland

A federal judge won’t allow a group of protesters to file a class action lawsuit against the city of Portland for the “indiscriminate use” of tear gas and munitions against the public during the city’s 2020 racial justice protests.

The lawsuit, led by the nonprofit Don’t Shoot Portland, was filed just over two years ago, days after Portland police began responding with tear gas and impact munitions to local demonstrations against the murder of George Floyd by Minneapolis police. Attorneys representing Don’t Shoot Portland and five other individual protesters in the case had petitioned District Judge Marco Hernandez to expand the case to a class action suit, arguing that hundreds of protesting Portlanders had been similarly impacted by PPB’s heavy-handed protest response.

Yet, Hernandez didn’t see it that way. In his Tuesday ruling, Hernandez writes that the proposed class of people impacted by PPB’s actions lack enough “commonality” to be bundled into the same group. He points to the differing intentions of protesters and their disparate damages due to PPB’s actions.

“This case involves the dilemma of what type and amount of force can be used by police against protestors, particularly in situations where protestors have within their ranks individuals that threaten the safety of police officers and others,” writes Hernandez. “It may be difficult to resolve this issue based on the events of a single night, much less over the course of 100 nights of protest, because each night involved a variety of different protests, in different locations, and with different circumstances. When undertaking the analysis in light of the claims at issue here and the significant scope of the classes proposed, it becomes evident that class certification is improper in this case.”

Hernandez notes that, in some cases, it may have been correct for PPB to use force against protesters who attorneys seek to include as plaintiffs in the class action—a determination that would make it impossible to clump all protesters in the same sweeping category.

This ruling is just the latest step in a winding legal challenge.

The initial June 5, 2020 lawsuit led to the approval of a temporary restraining order by Hernandez, which barred officers with the Portland Police Bureau (PPB) from using tear gas and “less-lethal” weapons (like rubber bullets and flash bang grenades) against protesters except in limited circumstances. Hernandez found the city in violation of that restraining order in December 2020, thus deeming the city to be in contempt of court. To move forward, the city had to agree to a number of sanctions, including a training for PPB’s Rapid Response Team, removal of the rule-breaking PPB officer Brent Taylor from crowd control events pending an internal investigation, and a training for all PPB officers on crowd control by the end of 2021.

Hernandez' Tuesday decision means that, while the case can still move forward, the plaintiffs won't be representing hundreds of other Portlanders impacted by police munitions in 2020. Don't Shoot Portland and the other plaintiffs can continue to pursue the case as-is, or they can opt to appeal Hernandez' ruling. It's not yet clear which path they'll take.

Juan Chavez, one of several attorneys representing Don't Shoot Portland and others in this case, said that Hernandez' ruling doesn't rule out the validity of the lawsuit. Chavez pointed to a particular line in the ruling, where Hernandez writes: "In moving for class certification, Plaintiffs have documented significant abuses by the Portland Police Bureau, described a disciplinary and oversight system unable to handle the pressure of the 2020 protests, and uncovered extreme bias and misinformation in PPB’s training. These facts and the events described by protestors are deeply troubling."

"The judge is clearly disturbed by PPB's conduct," Chavez told the Mercury Wednesday. "What we’ve uncovered in this process illustrates the City’s pattern and practice of dismissing the law and telling the public to shut up and take it. If I were advising PPB, I wouldn’t be telling them to pop the champagne. This is more than a flesh wound."