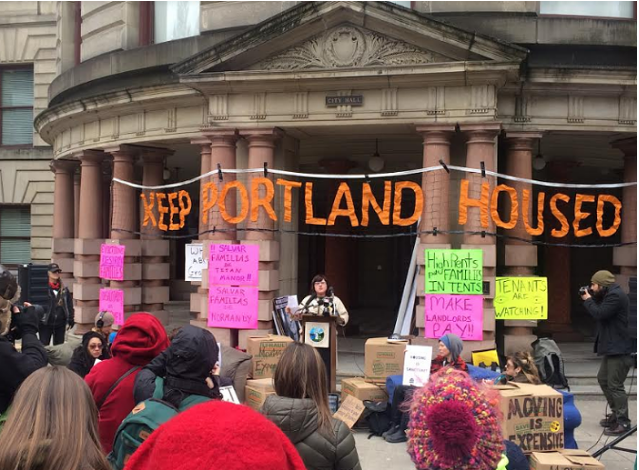 In a decision today, an Oregon tax judge ruled against landlords who'd claimed the new policy violates Oregon law and the state constitution. In a seven page decision, Judge Henry Breithaupt found that wasn't the case, agreeing with the city on four separate challenges to the law.

The decision marks a bit of good news for tenant advocates, who just saw their best hopes for new statewide protections dashed to pieces in the Oregon Senate.

To back up: The relocation law passed by City Council in February requires landlords to pay between $2,900 to $4,500 in relocation fees to tenants when they've a) raised rents by 10 percent or more, or b) issued a no-cause eviction notice.

The law is despised by the landlord lobby. Days after it passed, two landlords, Michael Feves and Phillip Owen—represented by high-profile lawyer John DiLorenzo—challenged the ordinance in court. Their suit argued that the ordinance amounts to rent control (which is preempted by state laws), illegally curbs no-cause evictions (which are allowed), hampers existing contracts, and unlawfully allows tenants to sue when landlords don't pay up. Here's Breithaupt's decision dismantling those claims:

Of all the arguments landlords were making, the claim that relocation payments violated the state preemption on rent control seemed to hold the most promise for landlords. But Breithaupt concluded that the law didn't explicitly prevent landlords from raising rents.

"It is difficult to imagine that the legislature intended something other than proscribing restrictions that would affect all sellers in the market—landlords," the judge wrote. Later he writes: "The Ordinance—while it applies throughout the city—will apply to any individual landlord only if conditions or contingencies are also satisfied as to that individual landlord. The landlord must raise rents by more than a specified amount in a specified period."

City officials cheered the ruling. Jamey Duhamel, the policy director for Commissioner Chloe Eudaly who was instrumental in bringing the law forward, issued a statement saying: "At a time when the legislature has so blatantly turned its backs on tenants in Oregon, it is deeply gratifying to know that the only tool available to us has been upheld in the courts. Relocation assistance helps stabilize families and we intend to make sure as many tenants as possible know about it."

In a letter to officials, Deputy City Attorney Dennis Vannier boasted that Breithaupt "just comprehensively rejected John DiLorenzo’s challenge to the City’s relocation-assistance ordinance enacted earlier this year, and conclusively ruled for the City on every claim..."

The relocation ordinance amounts to the strongest renter protection the city has—especially now that the legislature killed a proposal to open the door for rent control policies in the state. But the law is also maybe finite. [Nope. I'm wrong. It's going to be reconsidered when the city's housing state of emergency declaration is taken up in October, but isn't explicitly tied to it.]

Duhamel tells the Mercury that today's ruling provides firm footing for the city to rejigger the policy, though she won't say whether her office will argue to make it even stronger.

"There’s going to be a whole lot of push back, from the landlord lobby in particular," she says. "I think it would be wise as a council to take this fairly slowly. We know it's legal now. We know it’s been working for a while. What I’d like to see us do is collect some data over the next two months."

Duhamel says the City Attorney's Office has suggested it's unlikely DiLorenzo and his clients will appeal the matter because the ruling was "really solid in our favor."

"We appreciate the time and effort which the court has put into this case but must respectfully disagree with the rationale expressed in the opinion," the attorney wrote in a statement. "Whether we appeal will be dependent, in part, upon whether the City intends to renew the ordinance when it expires on its own accord."

Duhamel plainly doesn't intend for the expiration to go forward, though council will have the ultimate say.

As it happens the council next Thursday will consider tweaks to the ordinance proposed by an advisory body. Those tweaks would give qualifying tenants 45 days to indicate they want to receive relocation payment (and move) following notice of a rent increase, as opposed to two weeks. And they would give tenants six months from the time their rent is hiked to either decide to stay in place—in which case they'd be subject to higher rents and have to pay the relocation money back—or move.