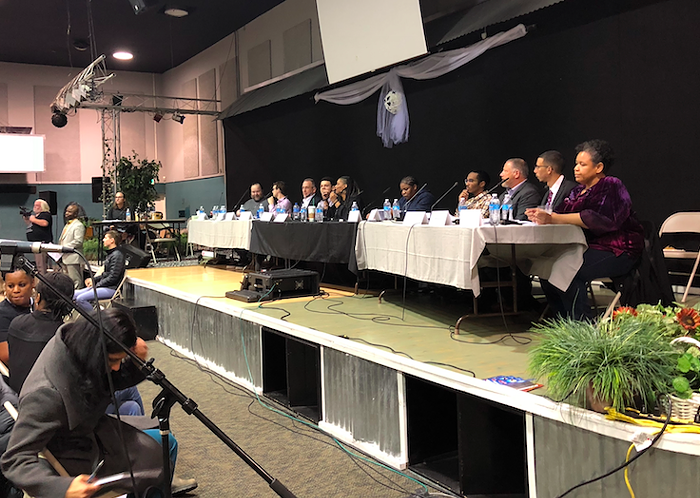 The first meeting of the PCCEP in 2018. Alex Zielinski
Six years ago, Portland's federally-required police oversight committee was in disarray. Now, it appears its replacement has reached a similar point.

Dubbed the Community Oversight Advisory Board (COAB), the 15-person group of volunteers was tasked with overseeing the city's 2014 settlement agreement with the US Department of Justice, a decision meant to repair Portland Police Bureau's damning record of using force against people with mental illnesses. Part of the agreement required a level of community oversight and engagement, a role that COAB was created to fill.

Yet, two years into the group's work, the committee began to unravel: Membership halved, the city had no plan to fill empty seats, monthly discussions turned contentious, and expected city officials stopped showing up to meetings. In hopes of addressing the mounting issues, the city placed COAB on a 60-day "recess," during which city staff would evaluate the group's problems.

When the group reconvened, the city offered few improvements. Three months later, and newly-seated Mayor Ted Wheeler attended a COAB meeting to let the remaining members know he was dissolving the board. Wheeler believed he could repair the board's problems by starting with a clean slate, and formed a new volunteer oversight commission in 2018 called the Portland Commission on Community-Engaged Policing (PCCEP).

In hopes of avoiding COAB's faults, Wheeler made sure that the new group was well-staffed with a reliable plan for replacing commissioners who step down, and even contracted with an outside meeting facilitator to help guide the monthly meetings.

Now, a few years after the 13-person committee first met, most of those safeguards have been removed, and community members fear that PCCEP is teetering toward the same demise as its predecessor.

On Wednesday, Wheeler met with the remaining members of PCCEP (six seats currently sit empty) to suggest PCCEP takes a 60-day break to allow the city to replace staffing positions for PCCEP management, fill empty commission seats, and examine some of the recent complaints raised by PCCEP members about group's structure.

"Considering changes given around staffing, I wonder whether or not it might make sense to take a 60 day break to implement some of the feedback," said Wheeler Wednesday.

He was echoed by mayoral aide Sam Adams, who was mayor when the settlement agreement was reached in 2014.

”We need to take this pause to regroup and come back to do a better job in providing what you need to be successful," said Adams. According to Adams, the city simply does not have the staff hired to run PCCEP's meetings in the interim.

This suggestion of a hiatus appeared to morph into a mandate by the meeting's end, despite PCCCEP members holding a symbolic vote in disagreement with the plan.

"I believe PCCEP is in a crisis right now," said PCCEP member Amy Anderson. "And I think there are a variety of things that contribute to that."

Anderson pointed to the recent restructuring of PCCEP 's steering committee, which shifted from having one chair to being led by a coalition of chairs. PCCEP members said that this decision was pushed by the city's PCCEP manager who has since left the job. Other members said that they didn't receive the training required to participate in PCCEP, questioned the city's commitment to filling vacant positions, and questioned the true independence of the group from the mayor's office.

These concerns felt familiar to Assistant US Attorney Jared Hager, who has represented the Department of Justice in the settlement agreement since the agreement's formation.

"It’s not lost on us... that COAB's failure was due in large part because of the attrition—of the lack of membership—and the failure to appoint new members as well as the failure to have adequate administrative support and those are two issues that are plaguing PCCEP today," Hager told the group Wednesday. "To have those problems repeat, it's a serious concern."

He isn't alone in those worries. Dan Handelman, the founder of Portland Copwatch who's followed police oversight in Portland for decades, said the Wednesday meeting felt eerily similar to the final meetings of COAB.

"It feels exactly the same," Handelman told the Mercury. "These are all the same problems as before. I really don't know if the city is capable of keeping this board running."

Handelman, who in 2016 called the COAB hiatus a "crock," pointed to another similarity between the two groups. Right before COAB was disbanded, the group had submitted a list of recommendations to the city and Police Bureau, which included controversial reforms to PPB's deadly use of force policy. And now, as PCCEP spirals into a hiatus, PCCEP is pushing the mayor's office for clarity around a PPB training presentation made public in January that included a right-wing meme threatening violence on protesters.

"If PCCEP is forced to stop meeting now, it isn't a good look," Handelman said.

An overarching issue, Handelman added, is that PCCEP's city staff haven't given the group the support it needs to fulfill its responsibilities. He said it's incumbent on the city—not the group of volunteers—to keep the commission from fizzling out. These concerns aren't new to the city or the mayor, a point underscored by former PCCEP chair Elliott Young on Wednesday.

"These issues of staffing have been persistent throughout my two years on PCCEP," said Young. "I explained these issues to mayor last summer. It's surprising to me that there wasn't a plan in place from back then to improving staffing. This doesn’t seem like a new thing, this seems like a persistent problem."

The timing of this pause couldn't be less ideal. On April 29, the city is scheduled to appear in federal court to give the judge overseeing the settlement a general update on the agreement. Usually, PCCEP prepares a joint statement to submit to the judge as a way to show that the settlement's community engagement requirements are running smoothly. PCCEP decided to opt out of a statement at this next appearance, which is scheduled to fall in the middle of the expected pause.

On Wednesday, community members questioned whether the proposed pause would push the city further out of compliance with the DOJ agreement. Hager suggested that it could be brought up during the court hearing, which also includes statements from DOJ representatives.

"All options are on the table for us," said Hager. "But we do want to be pragmatic. We want to do what's best to make PCCEP successful. The end goal is good community engagement."

This isn't the only area of the settlement agreement that the city has fallen short on recently. In 2021, the DOJ said that the heavy-handed and poorly documented way police handled 2020's racial justice protests pushed the city out of compliance with the agreement. This news eventually forced the city and DOJ into court mediation, where both sides agreed on measures to remedy these errors.

Some members of PCCEP say they plan on speaking at the April court hearing, not as a member of PCCEP, but as a general member of the public.

Wheeler is expected to make a firm decision on whether or not PCCEP will be placed on hiatus early next week. If he goes with that decision, PCCEP won't meet again until June.

Zeenab Fowlk said that this move by Wheeler shows how little independence PCCEP has over its own group, which Wheeler had stressed is an independent oversight body.

"We are not an independent committee, since the mayor has the final decision," said Fowlk. "I find this really troubling."