School leaders say they are looking for a holistic safety approach as pressure grows to make a decision about School Resource Officers. 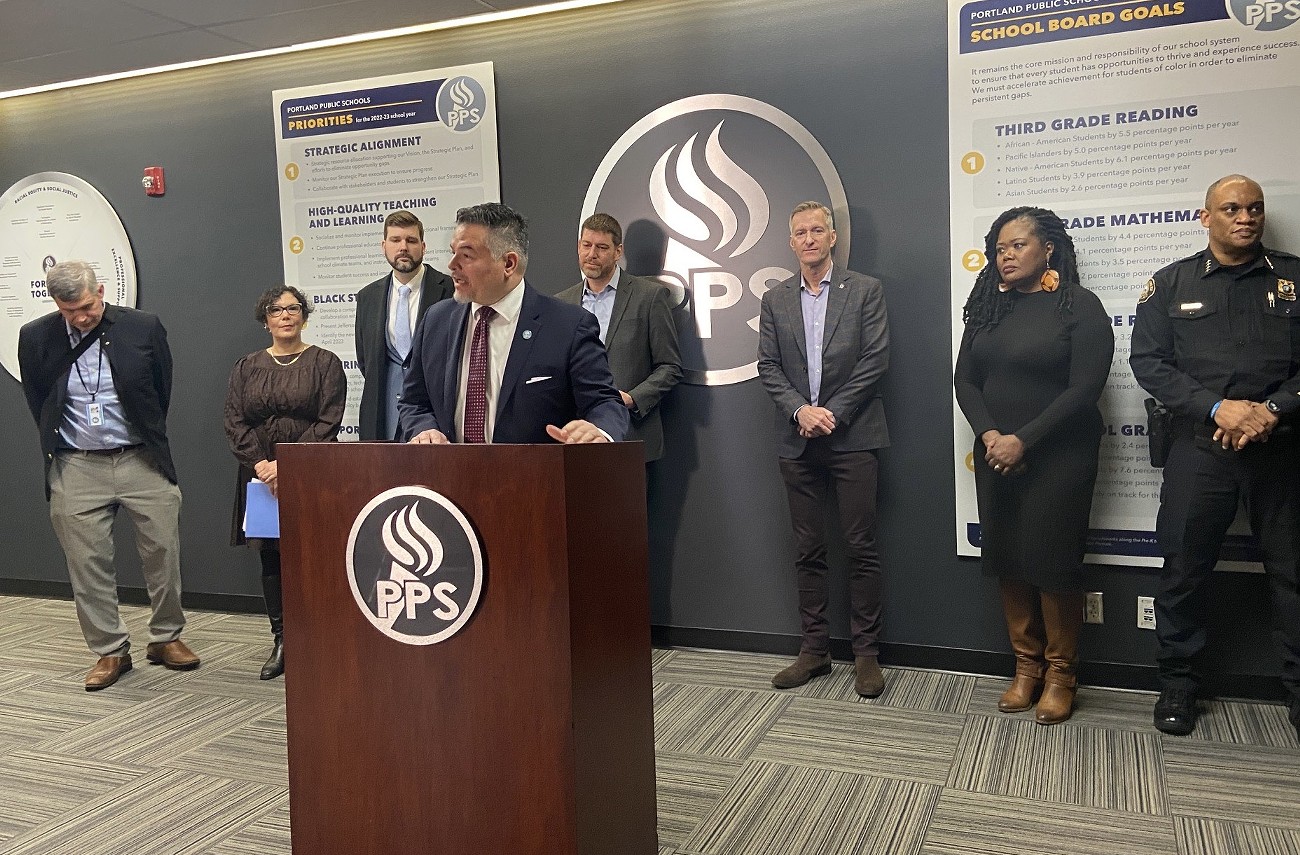 Pushed to take action after a recent spate of gun violence near several Portland schools, leaders from Portland Public Schools (PPS), the Portland Police Bureau (PPB), the city of Portland, Multnomah County, and the Multnomah County District Attorney’s office held a press conference Friday to announce they are talking to each other about possible solutions. While the group of officials said they had found “areas for immediate follow-up,” they declined to give specifics or confirm whether action will be taken before the end of the school year.

“Portland Public Schools stands ready to collaborate on exploring all potential strategies and proactive solutions aimed at addressing this crisis,” said PPS Superintendent Guadalupe Guerrero during the press conference. “As educational leaders, our ability to ensure a safe and positive school community requires a collective approach and coordination with public safety agencies.”

Within the past three months, three Portland high schools have been the sites of four incidents of gun violence, wounding five students and prompting dozens more to scramble for safety while at school.

In the wake of shootings near Jefferson and Cleveland High Schools in late 2022, PPB Chief Chuck Lovell said the bureau was in early conversations with PPS administrators to possibly return School Resources Officers—armed police officers assigned to specific school campuses—to some schools.

PPS previously ended regular police presence at its schools in 2020, days after the police murder of George Floyd and subsequent racial justice demonstrations. At the time, Guerrero announced on Twitter that the district needed “to re-examine our relationship with the PPB.” Mayor Ted Wheeler—who oversees the police bureau—agreed to pull all police officers from PPS schools, tweeting that the city must “disrupt the patterns of racism and injustice.”

A 2021 study of national school data by the University of Albany found that School Resource Officers do not prevent school shootings or gun related incidents, but do increase the number of suspensions, expulsions, and student arrests, particularly among Black students. According to Portland data, more than 50 percent of the students PPB officers arrested on Portland school campuses in the 2017-2018 school year were Black, despite Black students representing about 9 percent of the student population. The majority of those arrests were made by School Resource Officers.

Guerrero did not say Friday whether his position on School Resource Officers had changed, but did note that PPS is currently holding focus groups with student leaders, educators, and families about what safety on school campuses should look like, including whether police presence is included in that vision of safety. Prior to the removal of police from PPS schools in 2020, dozens of students petitioned the district in 2018 and 2019 to walk back an agreement between PPS and PPB to expand the presence of School Resource Officers from three to five days a week.

PPS Board Chair Andrew Scott said the district is open to police officers returning inside schools, but that the conversation around the police’s role at PPS schools is too narrow.

“I’m a little frustrated that the conversation in the community seems to be becoming very binary about whether we are going to have School Resource Officers or not,” Scott said. “In today’s conversation, we covered a whole host of interventions and programs that are really going to help reduce violence.”

Guerrero and Scott spoke generally of connecting students with existing social services and partnering with the city and county to collaboratively manage cases of students who are repeatedly involved in or impacted by gun violence, but did not provide any more detail of what potential interventions and programs may include. On Friday, Mayor Ted Wheeler announced a $5 million investment over two years in “credible interveners,” community members who can provide outreach to people who are involved with gun violence in the city.

In the absence of detail about potential programs and interventions at schools, pro- and anti-School Resource Officer sides have already started forming.

People for Portland, an anonymously funded advocacy group critical of the city’s response to homelessness, launched a letter campaign Thursday, urging Portlanders to send a pre-written letter to local lawmakers asking them to return School Resource Officers to schools due to the “rising violence, shootings, and the sale and use of lethal drugs in and around our schools.”

Earlier this month, the Oregon chapter of the American Civil Liberties Union (ACLU), a nonprofit advocating for civil rights and liberties, sent a letter to the PPS school board and Portland City Council to discourage the return of police to Portland schools, citing the disproportionate impact police in schools have had on students of color.

In the letter, ACLU Oregon Executive Director Sandy Chung emphasized evidence showing School Resource Officers do not prevent gun violence in schools, citing mass school shootings in Parkland, Florida, and Uvalde, Texas, where a lack of intervention by officers has been nationally criticized. Portland police officers were already stationed at Franklin High School to provide security during a basketball game last weekend when someone fired a gun in the school parking lot, injuring one juvenile. A PPB press release noted that the officers’ presence at the game allowed the police to respond to the shooting within three minutes.

As regional leaders discuss the presence of police in schools and collaborative case management for students who are heavily impacted by gun violence, Chung believes there is a notable absence of conversations around the prevalence of and access to guns.

“A lot of people don't lean into [conversations about gun control] because it is a very contentious space,” Chung told the Mercury in a phone interview. “But even if it's contentious, if it is causing all of this harm in our communities, aren’t those exactly the issues that our elected leaders should be leaning into?”

Discussions with PPS students and families about campus safety and the response to gun violence are scheduled to begin next week.