ODOT’s own analysis of the project shows an increased risk in pedestrians being hit by cars. 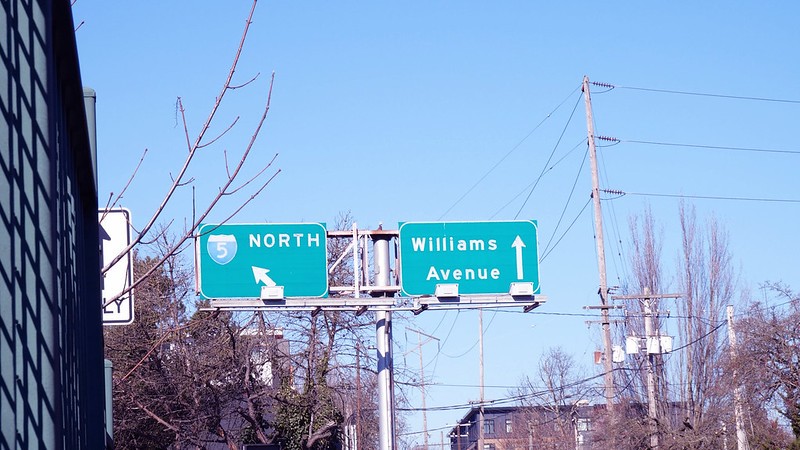 The state transportation department’s billion dollar project aiming to reduce congestion along the Interstate 5 Rose Quarter corridor will increase the risk of cars hitting pedestrians near the I-5 off-ramp by the Moda Center, the department’s project analysis shows. Planners with the Oregon Department of Transportation’s (ODOT) project team say the design is still in the preliminary stages and can be adjusted, while pedestrian advocacy groups argue that this is another example of ODOT prioritizing speedy travel for cars over human life and safety.

“ODOT is planning on spending $1.45 billion to increase the chance that somebody will end up in the hospital or morgue, but they won’t spare a few million dollars to make improvements on our deadly orphan highways, like SE Powell Blvd. or Tualatin Valley Highway,” said Claire Vlach, a member of pedestrian safety advocacy group Oregon Walks, during a rally in opposition to the project Tuesday.

The Rose Quarter I-5 corridor is one of the worst bottlenecks in the state along with one of Oregon’s most used freight routes, leading to approximately 12 hours of congestion every day. Tasked by the Oregon Legislature to address the congestion issue, ODOT decided to add a highway lane in each direction that connects drivers from on-ramp to off-ramp in an attempt to reduce unnecessary merging. The project has also grown to include a freeway cover—a large concrete cover that will dome over the freeway and reconnect the city street grid interrupted by the interstate—as a way to return land to the historically Black neighborhood that was partially razed and bisected by the construction of I-5 in the 1960s. A freeway cover design, which determined how the city street grid will connect to the I-5 on- and off-ramps, was selected in late 2021 following input from representatives of the Albina neighborhood, transportation leaders in the region, and Governor Kate Brown.

The selected design relocates the I-5 southbound off-ramp from N Broadway to N Williams St. Per the project’s website, this relocation “improves the quality of developable land space on the highway cover and provides more space for people walking, biking and rolling through the area.” While pedestrians and cyclists may have more space in this street configuration, the likelihood of them being hit by a car in the area also increases, per ODOT’s analysis.

According to ODOT’s Environmental Assessment—a federally required report that evaluates the impacts of the project design—the reconfiguration of the southbound off-ramp around N Williams St. and N Wheeler Ave. would “reduce safety for northbound cyclists and pedestrians” on N Williams St. and create “increased potential for pedestrian auto conflict.” Bicyclists using N Williams St., a common biking route, would have to cross both the entrance of the I-5 on-ramp and two right turn lanes connected to the off-ramp according to the new design.

“‘Pedestrian auto conflict’ is a sanitized way of saying human bodies—loved ones, friends, and neighbors—will be struck by thousands of pounds of metal traveling at high speeds,” said Michelle DuBarry, a member of the Oregon and SW Washington chapter of Families for Safe Streets, during the event Tuesday hosted by I-5 project critic No More Freeways.

ODOT’s findings also drew concern for Portland’s Pedestrian Advisory Committee—a volunteer committee that works with the city on walking issues. Per a draft letter first reported on by BikePortland, the pedestrian advisory committee originally urged the Portland Bureau of Transportation (PBOT) to withdraw its support of the design concept altogether, citing concerns of a decrease in pedestrian safety. Before the committee’s letter was included in an official package of comments to the state from PBOT on the Rose Quarter I-5 project, the PBOT staff member tasked with advising the committee urged them to rewrite it to be more supportive of the project.

The final version of the letter asks PBOT to withdraw support of the “components” of the street design that will worsen conditions for pedestrians, as opposed to withdrawing all support from the project.

PBOT did not respond to the Mercury’s request for comment.

According to ODOT Urban Mobility Director Brendan Finn, the design of the surface streets around the I-5 on- and off-ramps is still in the early stages. In a written comment to the Mercury, Finn said that ODOT intends to work with PBOT to ensure that the street conditions are safe for pedestrians and bicyclists in addition to drivers.

“Safety is ODOT's priority and this report’s purpose is to identify all impacts, so we can work with the community, the City of Portland and other partners to address all safety concerns as the design of the cover progresses,” said Finn.

Addressing those safety concerns may include restricting cars from turning right during red lights where the I-5 off-ramp crosses the bike lane, extending the sidewalk corners so the crosswalks are shorter for pedestrians, and having phased traffic signals that give bicyclists and pedestrians time to move independently of car traffic. The project will also include raised bike lanes that are physically separated from cars.

Pedestrian safety advocates raising concerns about the Rose Quarter street design see a larger issue with ODOT’s definition of safety. Vlach of Oregon Walks is also a member of the Powell Boulevard Safety Workgroup, a group convened to provide input on safety improvements on inner SE Powell Blvd. after a semi-truck killed a bicyclist at the intersection of SE Powell Blvd. and SE 26th Ave. in 2022. SE Powell Blvd., a state-owned highway within Portland, is considered a high crash corridor where a disproportionately high number of severe and fatal crashes occur in the city. According to Vlach, ODOT representatives told the workgroup the agency has limited funding to add safety improvements to the deadly street. That’s not a new limitation for the agency; ODOT also cited a lack of available funding to improve safety conditions along 82nd Ave.—another deadly state highway cutting through Portland—prior to reaching a joint funding agreement with PBOT and the Oregon legislature to improve the street and transfer ownership of 82nd Ave. to the city of Portland.

However, ODOT—at the direction of the state legislature—has allocated over $1 billion to reduce congestion along the I-5 Rose Quarter corridor and “improve safety for travelers” by reducing fender benders by up to 50 percent. To Vlach and other critics of the I-5 Rose Quarter project, the difference in prioritizing funding for safety improvements shows that ODOT’s definition of safety relies too heavily on reducing minor crashes and not enough on reducing deaths.

“In the one area ODOT claims to care about, safety, this project is by their own assessment a failure,” Vlach said.

ODOT is currently reviewing public comments on the Rose Quarter project design. Construction of the project is expected to begin in 2023.