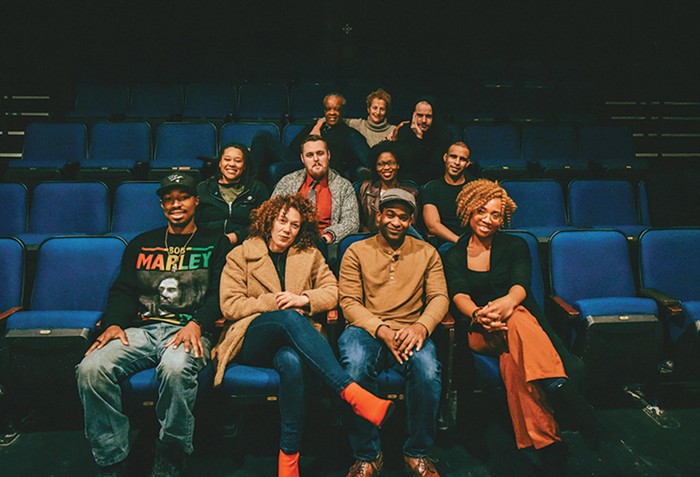 “P ushing boundaries” is a goal shared by many in the arts community—though achieving that goal, along with attracting audiences and financial resources, is an eternal struggle.

Portland’s August Wilson Red Door Project is becoming widely recognized for creating powerful and deeply complicated theatrical experiences that attract sold-out audiences and lots of attention. And they’ve accomplished this feat with little to no marketing.

Helmed by co-founders Kevin Jones and Lesli Mones, the Red Door Project set out to “change the racial ecology of Portland through the arts,” with performances that represent and encourage those often ignored by the city’s theater scene—and in their latest, most challenging project yet, their goal is to create a path of accountability and healing for people of color and the police.

“We were originally only going to produce five or six shows,” Jones says, “but more and more people came until we had to turn some of them away.”

Thanks to the vision and support of local funders, the Red Door was able to add more shows, eventually performing Hands Up 67 times for more than 12,000 Portlanders. Even more impressive, the show was promoted almost entirely by word of mouth.

“We didn’t do any marketing [for Hands Up], and it wasn’t reviewed,” Jones continues. “We wanted to make it available to the general public and let them decide whether or not people should see this show.”

Hands Up was exactly what audiences wanted: a thought-provoking show that elicited strong, often conflicting emotions. According to Jones and Mones, the regular post-show Q&As (or talkbacks) were “rich, emotional, and complex to facilitate.”

It was this same strong reaction that put Red Door on its current path, embarking on their most profound and controversial work to date: Cop Out.

It started the day a police officer attended Hands Up.

An audience member—convinced that members of the police should see this show—contacted Officer Michael Crebs, an assistant chief at the time, who, in turn, reached out to Jones. The two conversed over coffee for an hour-and-a-half.

“Then he came to the show, out of uniform,” Jones remembers. “At the end, he spoke at the talk back, saying, ‘This has been a very powerful experience for me. To be honest, I never really thought about what it must feel like to be pulled out of my car with a gun pointed at my head.’”

Crebs invited one of the actors, who had experienced several negative encounters with police officers, out to coffee.

“The two talked, and [Crebs] really had a transformative experience,” Jones says. “It was incredibly healing for both of them.”

This communication inspired Crebs to share his experiences with Deputy Chief Bob Day, who, at the time, was captain of the bureau’s training division. While he wouldn’t initially commit to seeing Hands Up, Day agreed to sit down with Jones and Mones. Day was cautious at first.

According to Jones, Day said something to the effect of, “If you’re gonna start talking about how cops are racist and all that stuff, you’re not going to get the police to listen to you.”

Jones responded, “Say more about that. We want to understand your experience as well... and actually, I was hoping I could tell your story, the story of the police.”

“That’s when it shifted for [Day],” Jones says.

While Day was open to the idea of a show that would spotlight cops and their daily struggles, Jones and Mones felt it was important for Day and others in the training division to see Hands Up—to fully experience Red Door’s vision of a multiplicity of perspectives. It took almost a year for Hands Up to be performed in front of a group of officers (along with a post-show talkback)—primarily because of reticence from both police and actors.

“Everybody was scared,” says Jones. “It was like, ‘Whoa man, that’s a little too far out there.’ But it was a great day, and we had a great, hard discussion. Eventually we were able to build a foundation of trust.”

After the police agreed to the idea, Red Door hired a squad of nationally recognized playwrights to write the eight monologues that eventually became 2018’s Cop Out, which were based on actual officer interviews, most of whom were African American. Cop Out enjoyed a run of successful performances, and as with Hands Up, the subsequent talk backs provided lots of feedback, both positive and negative.

Some of this negative feedback centered around the idea of equivalency—in this case, presenting both sides of a story in which one subject (the cops) inherently possesses more power than the other—which has caused confusion among certain audiences, some of whom have questioned Red Door’s intentions. Jones and Mones say they recognize how an audience could come to this conclusion of imbalance, especially in Portland, where progressive-minded people are more inclined to take sides... especially against the police.

“This situation is very complex, because you’re asking people to hold two conflicting ideas in their head at the same time,” Jones says. “[Producing Cop Out] wasn’t about leveling the playing field or facilitating a conflict on two sides. It’s not a binary conversation, because most of our monologues were from Black cops, who have experienced racism.”

“From a social power perspective,” Mones adds, “you can’t compare the experiences of the two groups of people. But from a shared human perspective, the feeling of being unseen, depersonalized, and stereotyped is something both groups can relate to. It’s in the DNA of Red Door to honor a multiplicity of viewpoints, because we know it’s imperative in producing a healthy racial ecology for the community.

“In all complex social issues, a diversity of viewpoints must be represented,” Mones continues. “In this model [of an ecology], all the different dimensions of an ecosystem are essential—for example, a healthy garden requires flowers, worms, water, and sunshine—in order to thrive and produce bounty. Similarly, the multiplicity and complexity of all the different voices around these issues of the police and the community must be expressed and listened to, in order to create sustainable social change.”

“From a social power perspective, you can’t compare the experiences of the two groups of people. But from a shared human perspective, the feeling of being unseen, depersonalized, and stereotyped is something both groups can relate to.”

Following the success of Hands Up and Cop Out, Red Door is developing a pilot program involving community members and law enforcement officials from across the state—police, prison guards, state patrol, and probation officers—with the idea of eventually integrating these shows into law enforcement training.

“The criminal justice system is going through huge changes,” says Jones. “Our challenge is to convene them in conversations—giving them an opportunity to talk with us, and more importantly talk amongst themselves about how [seeing Hands Up and Cop Out] can help with the challenges they’re facing right now.”

“Kevin is really the visionary behind this project,” Mones says. “And his vision is big and extremely exciting. We are a small, under-capitalized nonprofit, and we’ve now begun to seek investors who are excited by the boldness and creativity of this vision.”

But for all the challenges a program like this can produce, for the creative minds behind the Red Door, the end result is more than worth it.

“There’s something that happens when you’re sitting in a theater,” Jones says. “You’re watching a story unfold, and you don’t have to agree, disagree, or engage with that person. You can just take the story in and formulate your own conclusions and lessons learned from hearing someone tell their story.”